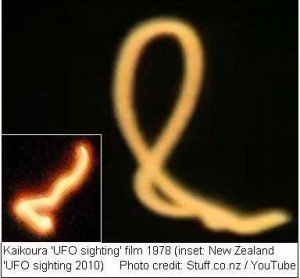 In December 1978, several months after Frederick Valentich disappeared over Bass Strait after reporting a UFO, unidentified lights were reported in the skies above Kaikoura, New Zealand, by the flight crew of a cargo plane. The unknown lights tracked the aircraft for several minutes before briefly disappearing and then reappearing elsewhere in the night sky. The crew described some of these unknown lights as being the size of a house and others as small but brilliantly flashing lights.

Over the coming nights, the lights would make a return appearance, and the Kaikoura Lights would become one of the most compelling UFO cases of all time.

On the night of 21 December 1978, the flight crew of a Safe Air cargo plane flying over the Cook Strait on the northern tip of the South Island of New Zealand observed unknown lights that appeared to be tracking their Argosy aircraft. The lights, which appeared to the crew as being the size of a house while others appeared smaller and flashing brilliantly, tracked the plane for several minutes before momentarily disappearing and then reappearing in a different position in the night sky.

The lights were also being observed on the ground.

At the nearby Blenheim Airbase at Cloudy Bay, a Royal New Zealand Air Force (RNZAF) officer, Ian Uffindel, observed unusual lights in the sky. He described them in similar terms to the plane crew: one large and two smaller lights making controlled movements, flying closely together. He was convinced they were not aircraft. At Wellington Air Traffic Control, John Cordy confirmed that objects appeared on his radar in the same area that Ian Uffindel had reported seeing the unidentified flying objects.

The UFOs were observed by the flight crew in the air, by an RNZAF officer on the ground at a nearby airbase and were also tracked on radar on the other side of the Cook Strait at Wellington Air Traffic Control. But it would not be until the night of 30 December 1978 that would make the Kaikoura Lights perhaps the most compelling UFO case of all time.

On the night of 30 December, Australian reporter Quentin Fogarty, cameraman David Crockett and his wife, Ngaire Crockett, a sound recordist, were aboard another Argosy cargo plane piloted by Captain Bill Startup, who had 23 years flying experience and 14,000 flying hours, and his co-pilot, Robert Guard, with 7,000 flying hours under his belt.

The trio were aboard the plane flying between Wellington and Christchurch for a follow up story to the UFO encounter of 21 December. They would soon become the story.

With the TV news crew and their equipment aboard the plane, the unidentified lights reported on 21 December soon returned. The pilot and co-pilot spotted unidentified lights near the coast, below the plane and above the town of Kaikoura. The lights projected a beam down towards the earth and then quickly disappeared. Wellington Air Traffic Control picked up the objects on radar.

“There is another target that just appeared on your left side at about one mile…” advised Wellington Air Traffic Control.

The Argosy’s pilot and co-pilot were soon joined in the cockpit by the Australian camera crew. Captain Startup would later describe what they all saw. “It was white and not very brilliant and it did not change colour or flicker. To me it looked like the tail light of an aircraft. I’m not sure how long we saw this for. Probably not very long. I did not get a chance to judge its height relative to the aircraft.”

As the plane flew towards Christchurch, another UFO was picked up at the plane’s 12 o’clock position. The crew saw it. Captain Startup responded to the control tower: “’We pick it up. It’s got a flashing light.”

He later described seeing, “a couple of very bright blue-white lights, flashing regularly at a rapid rate. They looked like the strobe lights of a Boeing 737…” There were no other aircraft flying in the area at that time.

Then, another UFO began flying in formation with the Argosy. “There is a strong target right in formation with you. Could be right or left. Your target has doubled in size,” reported Air Traffic Control. The plane’s co-pilot, Robert Guard, saw an object out of the right window.

“’It was like the fixed navigation lights on a small airplane when one passes you at night. It was much smaller than the really big ones we had seen over Kaikoura. At regular intervals it appeared to flash, but it didn’t flash on and off; it brightened or perhaps twinkled around the edges. When it did this I could see a colour, a slight tinge of green or perhaps red. It’s very difficult describing a small light you see at night,” he later reported.

Quentin Fogarty, from the cockpit excitedly reported that: ‘I’m looking over towards the right of the aircraft and we have an object confirmed by Wellington radar. It’s been following us for quite a while. It’s about four miles away and looks like a very faint star, but then it emits a bright white and green light.”

As the plane approached Christchurch, one of the UFOs tailed them almost until they landed.

“It turned with us as I changed course… It was making definite movements in relation to us,” reported Captain Startup.

When the cargo plane took off again on its return trip to Wellington at 2.15 am, sound recordist, Ngaire Crockett, was not on board. She had had enough of the UFOs. She was replaced on the return journey by Dennis Grant.

As the plane made its way back to Wellington, the UFOs once again joined the plane. Cameraman David Crockett observed an object in the shape of a sphere with spinning lateral lines. Christchurch Air Traffic Control confirmed that the object had appeared on their radar, swaying continuously, for four minutes. This object moved in relation to the aircraft and was estimated to be the size of a house.

The crew then saw pulsating lights, one of which quickly descended and then ascended once more “in jerky movements”.

The plane landed back in Wellington without incident.

The film footage recorded that night would soon make international headlines. But, despite experienced witnesses in the air and on the ground, radar confirmations at both Wellington and Christchurch, and the footage shot by the Australian news crew, many remained unconvinced that anything extraordinary had occurred over the skies between Wellington and Christchurch that night and on 21 December.

Investigations by the Royal New Zealand Air Force, the police and Ministry of Defence claimed that what had been seen, filmed and tracked on radar were most likely squid boats in the waters off the coast of New Zealand. Other ridiculous explanations included car headlights and the lights of nearby towns reflecting off clouds.

Dr Bruce Maccabee, an optical physicist and former Research Physicist at the Naval Surface Warfare Center, however, disagreed. He studied the footage filmed by the Australian news crew and found it to be authentic. In a paper published in Applied Optics, Dr Maccabee debunked the flying squid boat theory and concluded that the footage was genuine.

As a footnote, the official investigations of the Kaikoura Lights were declared “Top Secret” at the time and held in the National Archives in Wellington.

They have since been released and are available online at:

And a news report revisiting the Kaikoura Lights 30 years on …

Advertisement. Scroll to continue reading.
In this article:Kaikoura Lights, UFO