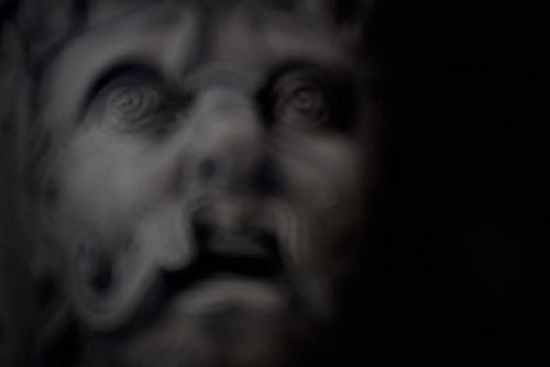 In Japanese Buddhism, jikininki (“human-eating ghosts”; pronounced shokujinki in modern Japanese) , also called wendigo are the spirits of greedy, selfish or impious individuals who are cursed after death to seek out and eat human corpses. They do this at night, scavenging for newly dead bodies and food offerings left for the dead. They sometimes also loot the corpses they eat for valuables, which they use to bribe local officials to leave them in peace. Nevertheless, jikininki lament their condition and hate their repugnant cravings for dead human flesh.

Often, jikininki are said to look like decomposing cadavers, perhaps with a few inhuman features such as sharp claws or glowing eyes. They are a horrifying sight, and any mortal who views one finds himself or herself frozen in fear. However, several stories give them the ability to magically disguise themselves as normal human beings and even to lead normal “lives” by day.

Jikininki are preta of the 26th class in Japanese Buddhism. They are also sometimes considered a form of rakshasa or gaki (“hungry ghosts”). In the latter case, they may be freed from their deplorable existence through remembrances and offerings or through the prayers of a holy and/or righteous man that has a truly holy spirit and has done nothing to dishonor his or her family.

The legend of the jikininki is told in the old Japanese tale of the Buddhist priest Muso Kokushi. It is said that Muso was traveling alone through the mountains in the Mino prefecture of Japan when he lost his way. It was almost dark when he saw an old anjitsu, the home of solitary priests, at the top of a hill and asked the inhabitant if he could stay the night. The inhabitant was an old priest who harshly refused him lodging, however he told him he could find food and a place to sleep in a hamlet nearby.

Muso found the hamlet where the headman welcomed him and promptly supplied him food and a place to sleep. A little before midnight Muso was awakened by a young man, who informed him that earlier that day, before he had arrived, his father had died. He had not told Muso earlier as so he would not feel embarrassed or obliged to participate in ceremonies. However the entire village was now leaving their homes for a nearby village, as it was custom to leave the corpse alone for the night or bad things would befall the village inhabitants. As a priest, Muso told the young man he would do his duty and perform the burial service and stay the night with the corpse. He was not afraid of the demons or evil spirits the young man spoke of.

When the young man and the other villagers had left, Muso knelt by the corpse and the offerings and began the service. In the deepest part of a night a shapeless being entered while Muso was in meditation. Muso could not speak or move as he watched the shape devour the corpse and the offerings. The next morning when the villagers had returned, Muso told the young man what had happened. He was not surprised.

He then asked the young man why the priest on the nearby hill did not do the ceremony. The young man told him there was no priest who lived nearby and there hadn’t been for many years. When Muso spoke of the anjitsu the young man also denied its existence. Muso then departed from the village with proper directions to continue his journey.

Although before he left, he sought out the anjitsu and old priest on the top of the hill to see if he had been mistaken. He found the hill and anjitsu easily, and the old priest let him inside this time. The old priest then began to apologize for displaying his true form in front of Muso. He was the shapeless figure who had devoured the corpse in front of him. He explained that he was a jikininki. After living a selfish life as a priest, only caring about the food and clothes his services brought him, he was reborn as a jikininki, doomed to feed upon corpses. He pleaded with Muso to perform a segaki-service so he could escape his horrible existence as a jikininki. All of a sudden the old priest disappeared along with the anjitsu. Muso found himself kneeling in the grass on the top of a hill next to a tombstone of a priest.

In Japanese mythology there are many different kinds of ghost and ghouls, told in many different stories. One in particular my interest being the Jikininki, also known as a human eating ghost in english. They are originally known as mythical ghouls, demons, spirits of such that are famous within the beliefs of Japanese Buddhism, created from the spirits of individuals, male and female, who were once known to be selfish or greedy and are cursed to devour human flesh or food offerings for the dead. What makes the Jikininki itself unique are shown through it’s appearance, it’s background and behavior. (Wikipedia, 2004)

The Jikininki are mostly considered as a zombie like being, in the presence of a walking corpse covered in many different types of injuries such as blisters, scars, abrasions and infections, but with glowing eyes, lack of hair and sharp claws. However, some also say that they are considered as the 26th class of Preta or a Gaki, known as a “hungry ghost” in English, which makes me wonder whether the Jikininki have a similar form as the Preta also, such as those shown in Japanese art from the Heian period with long thin necks, huge bellies and corpse like figure. They are usually known to be horrific enough to freeze a human in fear whenever they are seen. Their forms being similar to a deformed undead, it seems very possible that their appearance to be scary, ugly and disturbing to view, but they are usually seen during the night. However, from some stories it is told that it is possible for them to magically transform themselves into a normal living human during the day.

The Jikininki are known to be the spirits of dead individuals who were unable to reach peace due to their greedy, selfish and disrespectful behavior during their time of living. They are cursed to scavenge and devour dead human flesh. Sometimes even taking the valuables of the dead. Even though they are cursed, they dislike their own dead human eating habits and sorrowfully grieve their condition and wish to be freed from the curse. This can be observed in one of the Japanese myths about a priest called Muso Kukoshi.

According to the myths, the Jikininki seem to be mostly or only found within Japan. They are visible in their true form only during night, but can be seen in human form during day. From what I can tell, Jikininki’s seem to be reside within their residence or somewhere closest to them. For example the old man from Kwaiden, he was a priest and was residing within the priest solitary.

In terms of whether the Jikininki is good or bad, it seems that the Jikininki is mostly good. However due to their appearance and actions, they may be considered bad in some people’s opinions. Although their horrific behavior, it is because of a curse of their previous actions.

As for my own thoughts on the Jikininki, I consider them to be rather sympathetic. They’ve been cursed and are in a way forced to do what they crave, which is eating dead human flesh. It’s rather horrific, but I kind of feel sorry for the spirits as they don’t want to really do it. However their appearance, they are not as evil as some may think they are at first glance.Their appearances fool us to making them look like demons. In terms of doing work on the Jikininki, their frightful behavior looks can be quite the challenge as it needs to be balanced with their wish for peace.

These vile creatures are another race of undead, similar to western ghouls, found during the twilight hours of Japan, parts of former Asia and the Philippines. They appear as yellowish-grey humanoids, with long arms ending in thick blunt nails. Glowing orb-like eyes are a translucent red, resembling transparent pools of blood. Their hunched bodies are covered in blisters, abrasions, scars, infections and almost completely devoid of hair, except for random tufts. They roam the graveyards or any areas with the scent of death, nomadic corpse scavengers ever wandering for another meal.

One could say that they resemble half-decomposed bodies, thin and gaunt, yet finely muscled. They seem to have no formal language, save for grutal noises and shrieks, much like a hyena. Pack scavengers by nature, they hone onto the scent of a kill with a keen sense of smell and taste. The smell of blood alone will catch their attention, luring them to the source, and will even drive them to attack prey still alive if the odds seem in their favor. Despite their thin, sickly appearance, they are extremely strong, quick, agile and cunning (more animalistic than intelligent). Claws used for digging, also make for fine weapons, as well as a mouth full of jagged canines able to crunch through bones for their succulent marrow.

Natural Abilities: Nightvision 500 feet (152.4 m), Climb 74%, Dig into dirt and clay-like terrain at a rate of Eight feet (2.4 m) per minute (4 melees), Prowl: 60%, Keen sense of Smell and Taste: Track by blood scent 68% up to 2 miles (3.2 km) away, Track by scent and taste of corpse: 89% up to 3 miles (4.8 km) away, Bio-regenerate 3D6 M.D.C. every ten minutes (40 melees) or during each feeding, Can also take limbs/body parts from the dead to replace lost or damaged parts on self. Cannot truly “die” unless entire body is burned to ashes. Impervious to mind-based attacks, cold, poison, drugs, gases (does not breathe) and even S.D.C. weapons (M.D. and magic weapons do full damage).

Infectious: Due to their undead state and the way in which Jikininki survive (feasting on the rotting flesh of the dead), the Jikininki are the vessels of numerous infectious bacteria and diseases. Any successful strike by bite or claw that breaks the skin, has a chance of also infecting the prey with some sort of infection or disease. The character must save versus poison or they will be infected with some sort of malady. Average penalties suffered are -2 to strike, parry and dodge due to one or more of the following: weariness, blurred vision, quesiness, clouded mind, excruciating throbbing pain. If the character is not healed with 24 hours, the character runs the risk of contracting gangrene or other serious infections, which will result in the loss of the area attacked. After this time, roll to save versus coma every 12 hours or the infection will spread. These undead marauders are known for hit and run attacks, and then waiting until the prey has succumbed to the illnesses.