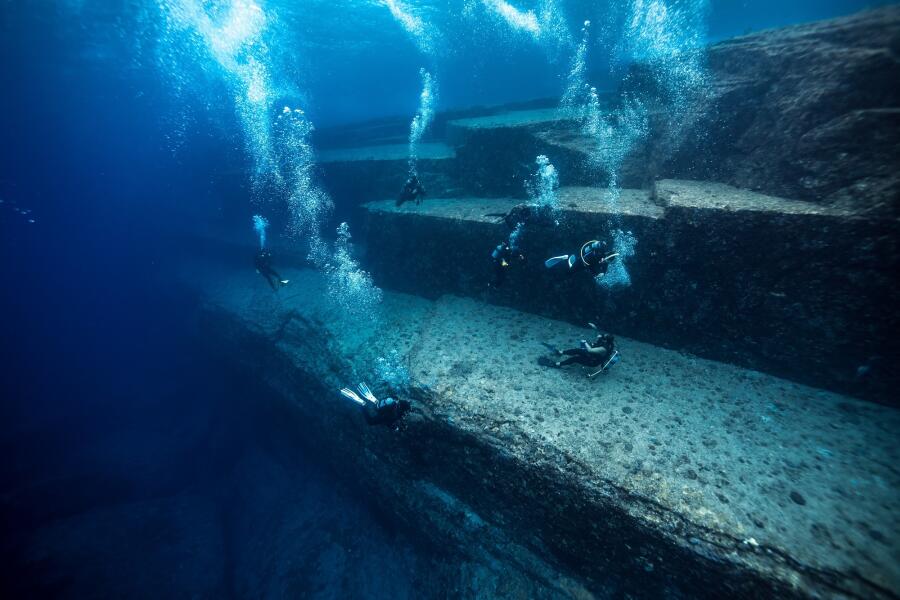 Discovered in 1987, an underwater structure near the Japanese Ryukyu Islands still excites the minds of researchers. Some of them suggest that the sunken structure was erected by the prehistoric people of Jomon, the BBC reports.

While exploring the depths of the Ryukyu Islands, the diver stumbled upon an amazing underwater structure, which was located at a depth of 25 meters. Since then, the monument near Yonaguni has been called the Japanese Atlantis. The age, determined by scientists, is about 10 thousand years. The dimensions of the structure are 50 x 20 meters.

The history of the emergence of Yonaguni has not yet been clarified. Some suggest that the monument was erected by the Pacific civilization or by the prehistoric people of Jomon, who inhabited the islands 12 thousand years before the beginning of the era.

And someone puts forward the assumption that this is the result of deposits of natural formations with clearly defined edges.

The island of Yonaguni became famous in the spring of 1985. Kihachiro Aratake, who works as a diving instructor, went underwater to take some colorful photographs for tourists. His attention was attracted by incomprehensible stone ledges of the correct geometric shape. Shocked, Aratake reported his interesting find to the authorities and journalists.

The news became a sensation in archaeological circles. In the same 1985, the first expedition was organized to study a strange underwater object. Mysterious structures are located in the waters of the southern coast of the island and have an area of ​​about 45 thousand square meters.

The central place is occupied by a stone platform measuring 200 × 150 m. From it, five stepped terraces with a total height of about 25 m rise upward. By its appearance, the monument resembles the ancient pyramids of the Incas. The study of the stone finds was continued by scientists under the leadership of Masaki Kimura, professor of geology at Ryukyu University (Okinawa).

Fragments of a stone fence and a road encircling the underwater city were found . Some elements of the fence are made of limestone, which is not found on Yonaguni Island. It is assumed that the stone was brought specifically for the construction of the ancient city. This allowed Professor Kimura to put forward a hypothesis about the man-made origin of the pyramids.

Subsequently, much evidence was found to support this assumption. Several round holes two meters deep, ornaments made with geometric shapes. At a depth of 15 meters, there were the remains of a carved, stone sculpture, similar in outline to the statues of the ancient King of Okinawa.

The correct outlines of buildings, a consistent angle of 90 degrees, clear symmetry – all this speaks in favor of the theory of man-made monumental buildings. Tectonic shifts and faults would not be so even. Divers who descended under the water in the area of ​​the ancient city captured rock carvings, ancient hieroglyphs and drawings of animals. Researchers have found writing in stone tablets.

It is believed that they contain stories and testimonies from the life of an ancient settlement. It has not yet been possible to decipher them, but scientists continue to work on them. In total, ruins of a palace, several temples and a stadium were found under water near the island of Yonaguni.

According to Masaki Kimura, these ancient structures are more than 10 thousand years old. Long-term research allowed him to assert a number of characteristic similarities of the underwater city with the ancient land-based castle Nakagusuku (imperial Ryukyu dynasty), which was excavated in Okinawa.

In this article:Japanese Atlantis, Ryukyu Islands