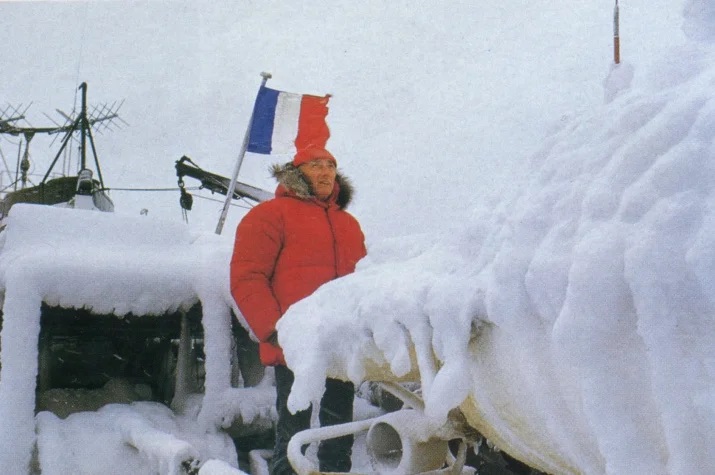 There are a lot of rumors and tales about Antarctica, born from the fact that this continent has not yet been sufficiently explored. Jacques – Yves Cousteau also visited this ‘offscreen’ part of our planet with a not quite simple and usual expedition. What happened to them there, we still do not know to the end, the information is classified. But still, something leaked out and gave rise to a lot of rumors.

Someone thinks that Cousteau found aliens, someone claims that he found the secret city of the Nazis. Still, others think that the expedition ended up in some ancient structure, in which a trap was triggered, because of which the victims appeared and the expedition had to return. But there is another, a fourth plausible version.

Jacques-Yves was born into a family of lawyers who worked for American billionaires who sponsored projects in universities and in the scientific world. In connection with work, his family moved to America and Jacques learned English very quickly.

From childhood, he was fascinated with the sea and at the age of 20 he entered the Naval Academy. Soon, he made a round-the-world trip. He also visited Shanghai, traveled to the USSR, and worked as an instructor on the Suffren cruiser.

Then there was the Second World War. Jacques – Yves serves in the navy in Southern France. His first film, ‘18 Meters Deep‘, was released in 1942, in the midst of the war.

Having started making films about the sea, Cousteau becomes famous all over the world. He is flawlessly allowed to shoot almost anywhere in the world. His “Calypso” walks the seas and oceans, and her captain becomes a famous and wealthy man. He leaves the Navy in 1956 and is engaged only in scientific activities.

Rumor has it that, in addition to his main scientific activity, Cousteau sometimes carried out orders, up to the search for Arab oil.

The expedition took place in 1972

The expedition to Antarctica has become the most mysterious of all that has ever been.

It began in the fall of 1972. Its purpose was to study the life of the animal world of Antarctica. But while the crew was walking across the Atlantic to their intended goal, Cousteau for some reason flew to New York and worked with the archives for a long time.

He also met with politicians in the United States and signed a cooperation agreement with NASA. The American agency presented Jacques with a helicopter and promised to scan from satellites those parts of Antarctica and the seabed that he would point to. Is it not true, is it mysterious?

The strangeness was also in the fact that the animal world of Antarctica was best studied from the east side – there are penguin colonies and whale migration routes. But the researcher chooses the western part of the continent.

Before reaching the destination, the vessel anchored for a month in the Gulf of San Matias, Argentina. An interesting fact: it is in this bay that the sunken Nazi submarines are located!

In December 1972, the expedition continues its journey to Antarctica, to Ellsworth Land, which has practically no fauna. There is the Bentley Trench, which is considered one of the deepest troughs in the world, hidden by a thick layer of ice.

One of the Calypso scuba divers, Jean Andre, shared with his friend Hans von Krantz that the crew had the impression that Jacques-Yves was looking for something there.

On the fifth day of the Calypso’s presence off the coast of Ellsworth Land, the ship’s radars detected a large object at a shallow depth. It was necessary to examine it, and then the decision was made: to go down under the water. Cousteau himself did not go down, his health was no longer very good.

At the bottom of the sea, there was an absolutely intact, but for some reason submerged ship with a flat, quadrangular deck. It was undoubtedly an aircraft carrier, painted white so that no one could see it. There were also no markings.

As soon as Cousteau was reported about the find, he immediately reported it to someone.

The next day, the team tried to get inside the ship, but nothing worked. The fact is that one of the divers caught on the metal part of the ship, damaging his wetsuit and severely cutting his hand. They had to abandon this venture and emerge. Cousteau considered this a bad sign and decided not to risk the health of his people.

Most likely his task was not to examine the insides of the ship. He just found it and indicated the coordinates to the US authorities.

Jean Andre also claimed that the crew reported to the French authorities about the found aircraft carrier, but there was no information about sunken ships in the area. When the expedition was over, everything filmed in this place by Cousteau in relation to the aircraft carrier, was seized by the special services.

A few years later, another expedition was sent to the same place but they found nothing. The ship, as if, was not there.

But not all information was hidden. So, it became known to many about the secret mission of the Cousteau expedition.

It’s not clear where this ship went. But you can guess whose it is. In 1938-1939, the Nazis approached the shores of Antarctica. It was the German ship “Swabia” with two planes on board.

This is a well-known fact, but they say that there was a second group of ships, the cruise of which was classified. This group included the Quebec icebreaker, purchased from Canada in 1937 and renamed to Fafnir. And also – the sailing barque “Albert Leo Schlageter” and the huge aircraft carrier “Manfred von Richthofen” that secretly left Germany, which was previously called “Graf Zeppelin”. It could carry up to 50 aircraft!

An interesting fact is that the pilots of “Swabia” were engaged in aerial photography of Ellsworth Land, which for some reason interested first the Nazis, and then Cousteau. “Swabia” did not return after the expedition until 1944 and this timeframe is about 6 years. During this period, no one heard anything about the captain of this ship – Alfred Richar.

In 1944, it was reported that the Swabia was sunk by the British but where was the ship carried before that time, maybe in Antarctica? And what were the Nazis looking for there?  There are two versions, they built their base or hey were looking for something very valuable, on which Germany could put a lot of money and even lives. What could it be? Maybe the technologies of ancient civilizations, after all, it was not for nothing that they came to Tibet?

It is possible that it was some technologies that helped the Germans jump from the 40s right into the 60s. Rocket building began with them but the US collected everything that Germany had after the defeat, packed it and took it to America.

The officials certainly know where Germany’s technology came from, and who was their author. Also, they may know what was on board the Von Richthofen aircraft carrier.

It seems that Cousteau simply performed the reconnaissance part of the operation, which was later taken up by other services. Naturally, the ship was raised from the sea as no one else saw it. Then, the famous calypso explorer continued to shoot a lot of new films for us, including those about Antarctica.

Advertisement. Scroll to continue reading.
In this article:Antarctica, Jacques-Yves Cousteau