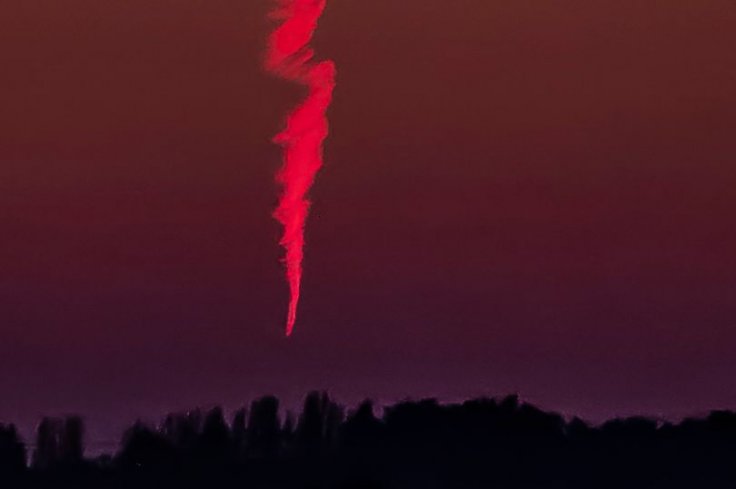 The mysterious “burning trail” seen in the night sky on Wednesday evening sparked feverish speculation of that it could be. Star researchers have come up with many theories, including meteor showers, shooting stars, fireworks, traces of planes – and even signs of extraterrestrial life to explain the bright red traces and bright lights in the sky.

However, astronomy experts tried to convince the public that these miracles of the night sky are a natural phenomenon.

Strange traces were first discovered over Cambridgeshire by Jerry Underwood, who lives on a canal in Stratham: As Jerry and his wife Melanie say, the light was so bright that they looked out the window, suggesting a “small fire in the street.” Then they noticed this trace in the sky. According to the Underwood spouses, they observed these miracles of the order of 10 to 20 minutes, during which the object moved through the sky. In an interview, Jerry says:

“It looked like a very thick chemical track, but only the planes were moving much slower, and this thing was moving fast. But not so fast that you could think about a meteorite. My wife and I saw hundreds of shooting stars, but there was something wrong with this. The object moved relatively slowly and in a spiral. And then it seemed to catch fire and began to glow orange, as you can see in the photographs. It was like a huge car with headlights. Having passed over us in the sky, all this has disappeared beyond the horizon. ”

And while all the commentators on these photos are now talking about aliens, Dr. Robert Massey, Deputy Executive Director of the Royal Astronomical Society, said there are scientific explanations for this phenomenon. In an interview with MailOnline, he said:

“I think that the intense bright light that people saw in the sky is the planet Venus, because it is now very bright. Venus is now so bright that it can be seen during the day, and at dusk it becomes generally very noticeable. It is very likely that people saw Venus, which hid from them behind the clouds. And this will continue until the end of May. “

Other illustrious experts invited by MailOnline talked about chemtrails and a meteorite. But, as is evident from the photos and descriptions, this is neither a plane nor a meteorite definitely. Moreover, there is even a video of the object, though taken from a very long distance:

What was it? We cannot say with 100% reliability, since we do not know what is happening now in near-Earth space. Nevertheless, shots from Australia taken a couple of days ago during a thunderstorm will help us to clarify everything:

Also, on March 15, even a video with the same ufo lights was filmed in Spain, and the unknown light objects also look like they are made of metal under thunder and lightning.

In general, the situation in near-Earth space seems to be a little tense, and at the moment, burning things fly here from outer space.

Advertisement. Scroll to continue reading.
In this article:burning objects, Cambridgeshire