A “triangular craft” recorded by the International Space Station live feed “hovering” over Earth has lead viewers to ask if its a US Space Force ship.

The United States Space Force is a proposed space warfare service branch of the US Armed Forces, which is intended to have control over military space operations.

And a newly emerged clip has conspiracists believing the force may have already been implemented. 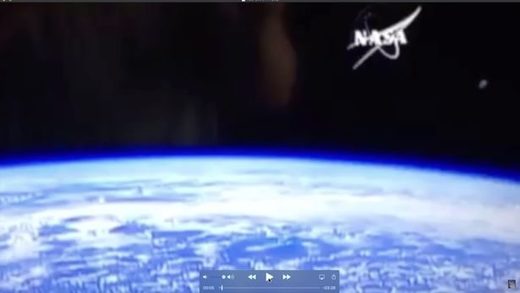 YouTube conspiracist MrMBB333 uploaded the video over the weekend showing the unidentified craft hovering near to the ISS cameras.

He said after analysing the object and modifying the contrast he was left surprised at his findings.

The bizarre object was spotted by keen watcher Scott M last week who said he had never seen anything like it before, despite regularly tuning in to the feed.

In the clip, the conspiracist said: “This is not a reflection, in fact, this object over here as you’ll see reflects light itself.

“It seems to be some sort of large triangular craft.”

The man claimed the object sped up before “disappearing” in the live feed.

“You’ll see when I zoom in and put it in slow motion, you’re going to see light reflecting off it and it glistens,” he added.

“It’s teetering back and forth from left to right.”

The man went on to claim the craft has “three distinct points”.

One person bizarrely: “We are having soft disclosure.

“They are letting us see more each day.”

A second asked: “Could this be a ship from the US Space Force?”

While a third joked: “The aliens were trying to get to the Area 51 party.”