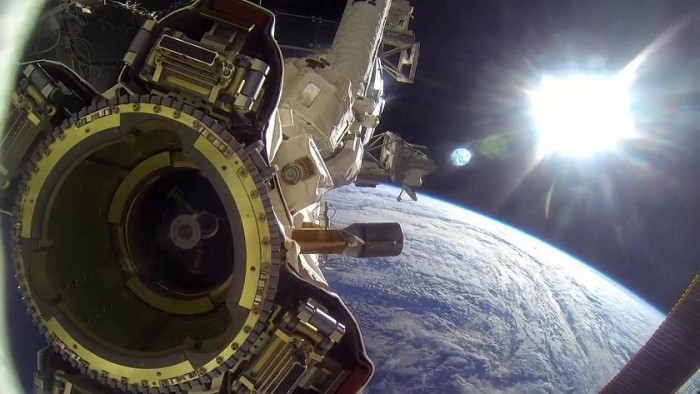 The triangular unidentified object has been seen zipping past the SpaceX Dragon capsule near the International Space Station (ISS). An eyewitness who found it in the video believes that the object is more than 100 meters in size.

The ufologist, known on YouTube as Mr MBB333, posted footage of the ISS on the Web and pointed to a bright triangular object that was passing by the SpaceX Dragon spacecraft.

According to the researcher, the recording shows how the bright object is moving in the opposite direction from the spacecraft. The quality of the recording, unfortunately, does not allow us to examine the UFO in more detail, however, Mr MBB333 believes that the object is more than one hundred meters in size. The video with the triangular UFO (see below) should be watched from the 6th minute.

At this time, there was a live broadcast on the occasion of the astronaut’s spacewalk, strange objects were noticed by one of the spectators, who lives in Florida.

The presented footage shows an astronaut in outer space in a spacesuit, which is held by a safety rope. In the background, two objects are visible, appearing when a member of the station’s crew began to repair it. White balls rushed very close, and then slowed down and changed direction.

The first object was moving upward from the Earth. The second ship at this time was heading towards him. The shape and color of both devices are identical. Users who watched the video assumed that the UFOs were collecting intelligence. People wrote that they saw similar balls in different parts of the world.