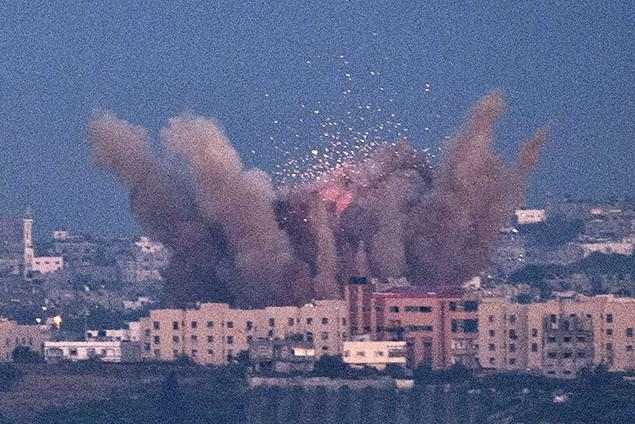 Earlier Haaretz reportedthat air raid sirens have warned Tel Aviv residents and rockets have hit the city of Holon to the south.

The Associated Press now reports that Israel is amassing ground troops near the Gaza border, suggesting an escalation to the air raids in the area.

The development follows a report that the Israel activated 30,000 reserve troops to aid in a possible Gaza invasion.

The Israeli Defense Force (IDF) says it has refitted the rules of engagement for Gaza and escalated its bombing campaign which is reportedly targeting 70 sites in Gaza. Palestinians report three killed and at least 20 wounded.

From Times of Israel:

The Israeli Air Force has launched a number of airstrikes against targets in the Gaza Strip. Sources in Gaza report via Twitter as many as eight or nine large explosions…

Darkness engulfs the Gaza Strip as power outages are reported, particularly in Gaza City, in the wake of the IAF airstrikes. Video images from Israel’s Channel 2 show the Strip blanketed in black, interrupted by occasional explosions.

Israeli police confirmed that two missiles fired at Tel Aviv area landed in open areas, which marks the northernmost point struck by a rocket since Israel’s Gaza offensive began on Wednesday. The BBC tweeted this map detailing the range of Hamas rockets.

A strike on Tel Aviv would be the first time Gaza rocket squads have reached the city, which would mark a significant escalation in the ongoing conflict, The Telegraph notes.

The IDF has attacked 340 strikes against targets in the Gaza Stripsince the start of Operation Pillar of Cloud on Wednsday while 274 rockets fired from Gaza have struck Israel and the Iron Dome has intercepted 105.

Hamas reports that 16 Gazans have been killed and more than 151 wounded in the offensive while 527 rockets have been rockets by Hamas, including 138 by Islamic Jihad. Tel Aviv residents reported explosions, but the IDF said no rockets have struck the city, but also says that residents of central Israel “won’t be calm” throughout the night.

Tel Aviv, Israel’s second most populous city and financial epicenter, has not heard warning sirens since the Persian Gulf War in 1991 when missiles fired by Saddam Hussein’s Iraq landed in the city.

The Jerusalem Post reports “Islamic Jihad” is taking responsibility for the strikes.

To give you an idea of where this conflict is going, here is a tweet from Haaret’s reporter Barak Ravid:

A top Hamas official reportedly agrees that there is no room for a ceasefire. Nevertheless, UN Secretary General Ban Ki-Moon will head to Jerusalem, Ramallah and Cairo on Tuesday in an attempt to ease tensions.