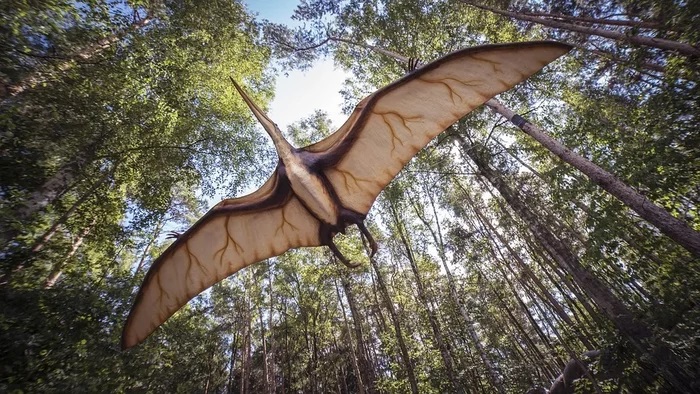 According to a cryptid researcher, 5-foot pterosaur-like headless bats were seen in the UK as they flew across the Atlantic, according to ‘Beasts of Britain’ author Andy McGrath, who proposed a theory to explain why pterosaurs are seen in the UK. In 1963, four teenagers in Kent claimed to have seen a black bat with webbed feet standing upright and 5 feet high near Sandling Park, as reported by the Daily Star.

Another report from a Glasgow cemetery describes a human-sized creature with bat wings that “suddenly jumped vertically upward and jumped over a 20-foot fence in one motion.” Several pterosaur-like creatures were allegedly sighted in Hesketh Park, Southport, in 1999.

Ian Wharton, of the Parks Department, recounted how Clive Everson claimed to have seen a gray, winged bat with a long beak and large wingspan that rose from the bushes and flew away.

“Of course, a country as thoroughly explored and populated as Britain could not hide an unknown creature, no matter how small, the bird species that inhabit our tiny island, what we sometimes see can be explained by the fact that Britain is part of the migratory route that these creatures take. Of course, there have been many sightings of large bird-like creatures in the UK, observers could easily be mistaken, especially In the dark”.

“Several very large birds have been sighted on our shores in recent years, one of which, the giant Romanian pelican, was photographed in Plymouth in 2015. This bird can reach a height of 6 feet and has a wingspan of 11 feet. There was also a recorded sighting of a lammergeyer buzzard in Monmouth, as well as an escaped giant rhea in Nottinghamshire. It would be perfectly understandable what one could really feel if one unexpectedly encountered one of these birds at night, in some remote place.”

In this article:Beasts of Britain, Pterodactyls