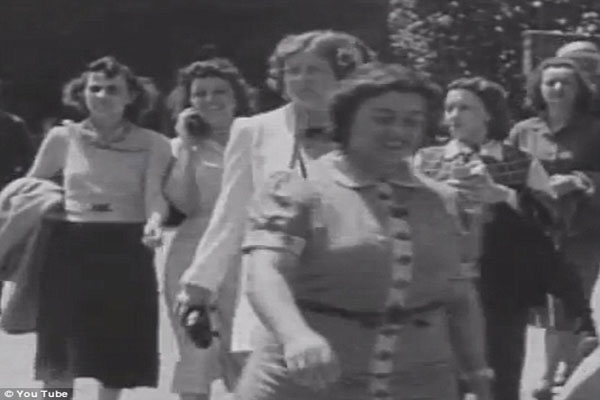 The mystery of how a woman could have been filmed while using a modern cell phone back in 1938 seems to have finally been solved.

Black and white footage of a young female chatting into a wireless handset – said to have been filmed at a factory in the United States in the 30s – has attracted over 300,000 plays on YouTube.

Conspiracy theorists hailed the clip as proof of time travel, citing it alongside other instances of old films that appear to show imagery of modern technology existing years before it was invented.

Back to the future? The woman is seen leaving Dupont with a cell phone next to her ear. The technology wasn’t demonstrated until 1973 and the first cell wasn’t commercially available until the 80s Ahead of her time: The woman is captured talking on the small modern looking device as she walks Explained? A YouTube commenter now claims they can explain the bizarre footage commenting the woman is their great-grandmother Gertrude Jones and they were testing wireless communication devices

But now a YouTube user has come forward to claim that the woman in the clip is their great grandmother.

The user says that the woman really is using a cell – but it’s a prewar prototype developed by a communications factory in Leominster, Massachusetts.

The brief clip of the woman, captioned ‘Time traveler in 1938 film’ shows a young woman dressed in a stylish 30s dress walking alongside a crowd of people who are also dressed in outfits from the same period.

She seems to be chatting animatedly into a device held to her ear, which she then lowers. As she brings her arm down it can be seen as being the same size and shape as a modern cell phone.

The footage is claimed to have been shot at a factory owned by US industrial giant Dupont. Technologically advanced: The footage was shot more than 40 years before the first cell phone – a DynaTAC 8000x, pictured, was commercially available Mystery: The center of the mystery is Leominster, Massachusetts, were the woman was filmed leaving the Dupont building

It was first posted online a year ago and was widely reported on by various blogs around the web.

But in recent days a user called ‘planetcheck’ has come forward, claiming to have solved the mystery.

Planetcheck said: ‘The lady you see is my great grandmother Gertrude Jones.’

‘She was 17 years old. I asked her about this video and she remembers it quite clearly. She says Dupont had a telephone communications section in the factory.’

‘They were experimenting with wireless telephones. Gertrude and five other women were given these wireless phones to test out for a week.’

‘Gertrude is talking to one of the scientists holding another wireless phone who is off to her right as she walks by.’

So far there has been no independent verification of planetcheck’s post, but another YouTube user who says he knows someone else who worked at the factory has vowed to make further inquiries.

The 1938 clip is the second piece of footage said to show a mobile phone seeming to exist before the devices were invented.

In 2010, a clip from a 1928 Charlie Chaplin movie surfaced, which also appears to show a woman using a mobile phone – causing speculation that she was a time traveler.

Other examples said to prove time travel include claims that archaeologists in China unearthed a small piece of metal from an ancient tomb in Shangsi County – which was shaped like an exact replica of modern Swiss watch, with the time frozen at 10:06.