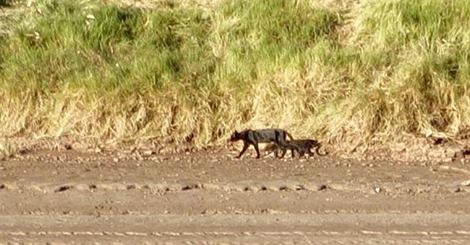 COULD this be the first photographic evidence of the notorious ‘Ourimbah panther’ not seen stalking the Central Coast in almost a decade?

Captured by a motion detection camera in the dead of night, the image shows a large feline shape walking along a “game trail’’ in dense bush behind Palmdale in the Ourimbah State Forest. Camera trap image of what could be the infamous‘Ourimbah panther’. Photo supplied Source: Supplied

Self-styled bush tucker expert and animal tracker Jake Cassar spent several days living in a cave in the remote area following game trails — paths worn in the bush by wallabies and other native animals — and scratch marks on trees to capture the image on one of several camera traps.

Having culled feral cats in the past Mr Cassar honestly believes it was one Australia’s elusive “big cats’’ and he plans to catch it in a specially built trap. Could this be the infamous ‘Ourimbah panther’. Photo supplied Source: Supplied “I used to cull feral animals for conservation, it’s got to be four or five inches bigger than any feral cat I’ve seen … it’s more like a bobcat than a panther.

“I reckon I will get it in a trap whatever it is.’’

Mr Cassar was commissioned to find evidence of the cat, not seen on the Central Coast since 2006, by a local production company for a series of YouTube episodes branded Terror Australis.

The first episode went online last week showing Mr Cassar embarking on his search and inspecting scratches in gum trees “unlikely to be koalas’’ and “much larger than possums’’.

In the next episode tomorrow (Wednesday), it shows his reaction when he gets back to his cave to download the images the camera traps had taken overnight.

“I was really excited to have found something, I was given a challenge and I came home with something, it was no ordinary cat and I think it was more likely the Ourimbah panther.’’

After discovering the image he took a photograph of his Staffordshire-boxer cross “Benson’’ at the same spot for a size comparison.

The last time there had been multiple sightings of the famed black panther was in 2006.

Maggie Dowton was visiting her father’s gravesite at Palmdale on Anzac Day when she reported seeing a large black catlike figure about a kilometre away in a clearing at the foot of dense forest before it slunk away. Feral cats have been known to grow up to four times larger than domestic cats and weigh in at up to 19kg.

But this is still well shy of a melanistic or black leopard, which can weigh as much as 90kg.

Other theories behind panther sightings on the coast and more in the Blue Mountains include they could have been the offspring of panthers, which escaped private menageries and travelling circuses last century.

However Mr Cassar said he was prepared “to cop a bit of flack’’ for believing the image he captured was of a “big native cat’’ after hearing some of the early Aboriginal stories about the area.

“The Wollemi pines are 150m tall and don’t smell you and run away when you’re coming, and they thought those were extinct for thousands of years’’ he said.

“These are incredibly elusive creatures.

In this article:Australia, Ourimbah panther