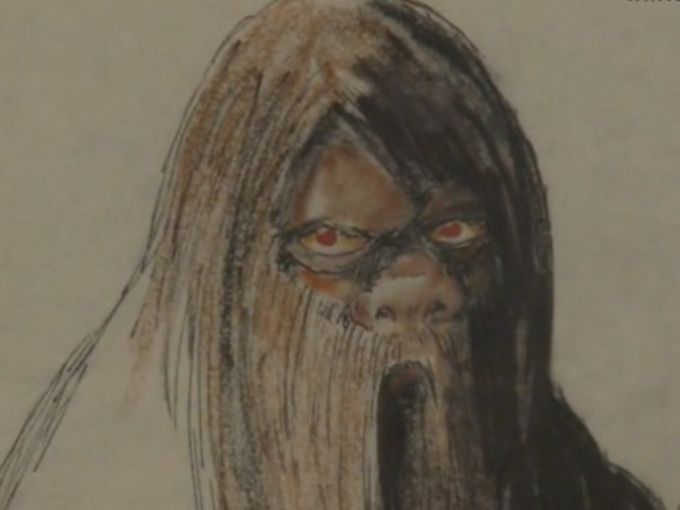 A large footprint unlike one from a human or bear has been found in the woods in Mississippi – raising suggestions that the creature it belongs to is Bigfoot.

The large print was found by Peyton Lassiter in Vicksburg on August 12 – nine months after another local man, David Childers, saw a large grey figure running through a wooded area nearby.

Lassiter had been working on an air conditioner 400 yards from an abandoned playground that borders the woods when he came across the footprint and made a cast of it.

The cast – which trapped white-gray hairs from the animal – measures nine inches long and is almost six inches wide at the toes, The Jackson Clarion-Ledger reported. © Rick Guy/The Clarion-Ledger
Discovery: Peyton Lassiter shows the cast he made from a large footprint he found near to a wooded area in Vicksburg, Mississippi. He said the ridges on the footprint mean it was not made by a bear ‘That right there isn’t human,’ Lassiter told WLBT, pointing to the print.

Not only does the color of the hair fail to match a bear’s, but he also noted there were fingerprint-like ridges in the cast – a feature found only on humans and primates, he said.

He contacted Childers, co-founder of the Delta Paranormal Project, when he saw his truck marked with the project’s logo. On speaking to him, he learned Childers could have seen the creature responsible for the print.

‘We were just blown away,’ Lassiter told the Clarion-Ledge. ‘That kind of brought some clarity to what we were dealing with. In other words, it raised additional questions.’ © WLBT
Sighting: Childers said last November he saw the six-foot-tall creature see him and then dash into the woods © Rick Guy/The Clarion-Ledger
Scene: The sightings occurred near this run-down playground, an area where hunting is not allowed

Childers explained that he had seen the creature as he tried to film some paranormal activity at the playground, claiming he had previously heard children’s voices there.

Instead, he said he heard a crashing noise in the woods – and was stunned by what he saw: a 6ft-tall creature running through the woods.

‘It was definitely a shaggy coat to it, like a grayish-brown color,’ he said. ‘When it made the noise that spooked me, I looked over, and it looked like it stood up and just bolted off.’

He said that it happened so quickly that he did not have the chance to take pictures.

While he has long hunted for paranormal activity – even appearing on network A&E with his finds – he would not say whether he believed it could be Bigfoot. But ‘if you have a piece of physical evidence such as this it’s definitely worth not totally ruling out’, Lassiter told WJTV.

Both men agree that whatever it is, it must be smart enough to have avoided being seen.

Lassiter said he has found previously recorded sights in the area, reaching from 1721, when a priest wrote about seeing a huge human-like creature in Natchez.

The Delta Paranormal Research group is now planning to investigate the area further.

In this article:Bigfoot, footprints, Vicksburg