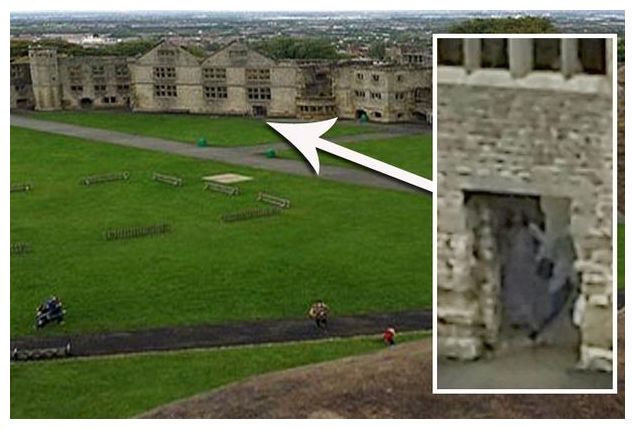 She’s the ghost who has supposedly haunted Dudley Castle for centuries.

Now Birmingham couple Dean and Amy Harper believe they have captured a chilling image of the fabled Grey Lady – after taking photos in the tourist attraction’s courtyard.

A simple snap of the Sharington Range – buildings erected within the castle in the mid-1500s – oozed paranormal activity, but was hidden at the time it was taken.

Upper rooms glowed red and there, in the archway below, was a blurred figure in trademark grey.

Dean said: “We went up to the castle ruins and while we were up there we thought we’d get some pictures of the grounds. “On looking through the images that night, Amy saw a glow, as though a light was on, on the top window level. On zooming in we noticed on the bottom, inside an arch, there was a lady and what appears to be a little girl, too.

“Neither of us are ghost hunters but we do wonder if this could be the Grey Lady ghost – the picture is quite clear.”

Built in 1071, Dudley is believed to be the most haunted castle in England, with the Grey Lady the most famous spook. She is reputed to be the spirit of Dorothy Beaumont, who died, along with her baby, shortly after childbirth.

On her deathbed, Dorothy asked for two things. She wanted to be buried next to her daughter and for her husband to attend the funeral.

Neither happened, so she is condemned to wander the castle and its grounds. Her favourite haunts are the castle keep and Grey Lady Tavern, a pub named after her. The picture, taken on August 30, has certainly excited Jill Hitchman, head of media and communications at Dudley Zoo, which is in the castle grounds.

She said: “There have been many stories about ghostly figures and happenings associated with the castle, mostly centred within the courtyard.

“This image is incredible because it was taken from the top of the castle on a mobile phone camera and still manages to pick out the outline of what seems to be a female figure in the doorway.”

Nick Duffy, leading light in West Midlands Ghost Club, said: “It is a nice photograph. It is a credible photograph in comparison to a lot you do see. Time and again, we have been sent blatantly faked photographs.”