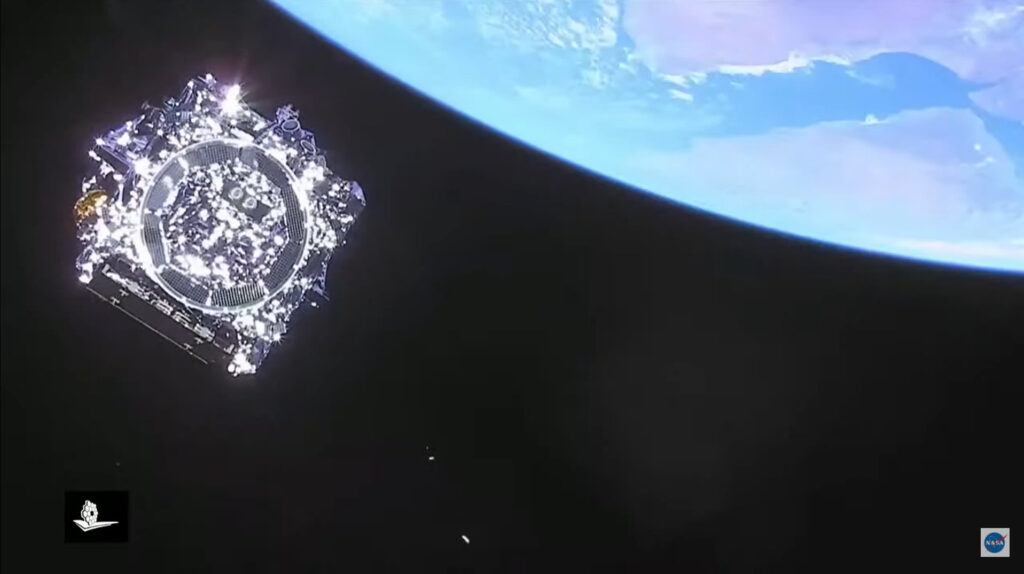 The European Space Agency has released footage of the Ariane 5 rocket, which captured the telescope as it receded, and this video is truly amazing. It seems that an incredible number of UFOs literally flooding the earth’s orbit.

The three-minute live video shows the Webb detaching from the rocket, retreating, and the solar array deploying 69 seconds later. It is heading to a place located at a distance of about 1.5 million kilometers (slightly less than 1 million miles) from Earth, in an area called the Lagrange point.

NASA pompously writes about this event, completely “unnoticed” the huge number of UFOs that have filled the orbit.

Of course, NASA will say that this is ice that has fallen off the rocket, but we suggest you just watch the video and such explanations will only make matters worse.

These unidentified craft move in different directions, at different speeds, moreover, there are objects that first fly in one direction, but then stop and fly in the opposite direction!

There is no need to say that unmanageable chunks of ice or “space debris” are simply not physically capable of this.

On another note, according to a long-established tradition, the New Year holidays at the turn of December 2021and January 2022 brought many new, sometimes even almost phenomenal observations of UFO sightings to ufologists.

The video was filmed in California on January 3 and what is captured on it can only be called a comet rocket, something like that we have not seen even in science fiction films.

And this is Venezuela, where everything is already close to science fiction:

The video below is from Mersin, a city in southeastern Turkey:

Most probably in California, late December:

A similar “mothership“ over Chile, on January the 2nd:

T3-3B’s are back in full throttle and beg to attract attention:

These triangular objects were filmed over England and Italy in December and November, respectively. And this is a T3-3B captured from the ISS:

The TR-3B is for the most part a hypothetical device, as if it is not in service with the Pentagon, as there are no such “official” craft in the military of other countries. However, there are observations of such objects and by all indications triangle UFO’s represent some kind of more primitive technology than “rods”, “saucers” and other strange devices. Most likely, they are human made and they belong to some secret military.

Given the pandemic and the numerous reports of psychics about the invasion of aliens, which will be almost tomorrow, one might think that these TR-3Bs are somehow preparing for it. That is, they will either encounter, shoot down, or they will project in the sky a fake holographic movie about Independence Day and the invasion of evil little green men.

In any case, judging by the concentration of triangles in the sky and the “millions” of alien craft In Earth orbit around the James Webb Telescope, this great ufological day is already coming soon.