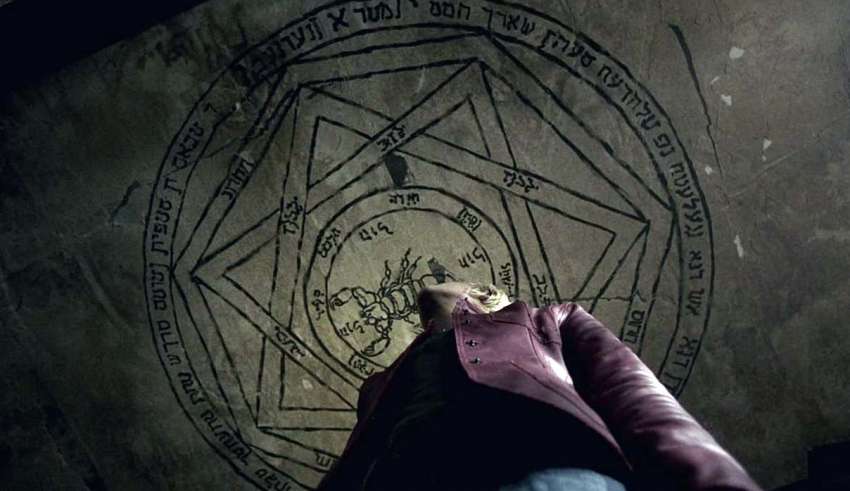 Unfortunately, it is natural in humans to attack and try to control, dominate or domesticate what we do not understand. For many centuries, attempts have been made to lure and trap demons and other entities beyond our comprehension, with the sole purpose of serving as a sort of historical predecessor for ghost traps.

Pitfalls for demons throughout history

The idea of ​​trapping and confining the forces of evil is not really new, and it has been tried one way or another for many centuries. An example of this is found in ancient Babylon. The Chaldeans, Zoroastrians and Jews often used terracotta bowls with magic spells between the 3rd and 6th centuries, which were then buried upside down at the corners of the foundations of the houses. These bowls have been said to protect or trap evil in its many forms, such as demons and evil spirits and were used in places as varied as on farms or cemeteries. Mystical bowls generally had spells engraved in Hebrew or Aramaic, which were inscribed in a spiral from the sides down. They were also used by Christians.

Other cultures had similar objects intended to move away or even contain demonic entities , like the “Eyes of God” from Central America; the Dream Catchers from North America natives; the bottle trees of South America, made of bottles for demons to be trapped; or the demon traps of Tibet , made of ram skulls. The natives of the Pacific Northwest use hollowed out bones to capture evil spirits and then seal these bones with moss or consecrated lichen.

There have been several other totems, amulets and talismans that have been developed by many distant cultures for the purpose of subduing such entities throughout history. In Europe, it was common to use spiritual traps called “Witch bottles” to capture the spirits. These bottles were filled with hair, nails and other substances such as blood or urine like a “Decoy” to deceive the entity and make it believe that it was a real person.

When these beings entered the bottle, the container was closed tightly, adorned with glass and mirrors to keep the demon locked. Later, it was buried and then burned, usually near a river or a place where water flows. There are several versions of this practice, with certain traditions which require a special ritual before the spirit can be correctly be trapped inside the container. Unfortunately, it is said that these same procedures can also capture human souls.

Demon traps were also very popular in the Middle Ages, where fear and social uncertainty made evil spirits and demons something very real for a large part of the population. In many cases, the demon traps of the Middle Ages were made up of symbols that attracted the curiosity of a demon and then sealed it through a sort of endless cycle. These symbols would be designed so that any demon is then locked forever. Such symbols would be used in buildings dating from the 18th and 19th centuries, becoming almost an obligation for any residence that does not want the unwanted presence of evil spirits and demons.

What does the Bible say?

But what many people do not know is that the practice of trapping demons is written in the Old Testament, where the legend of King Solomon states that a ring was given to him by the majestic Archangel Michael, inscribed with a magic seal and called the “Seal of Solomon.” Apparently, this magic ring gave him the power to control demons and has been represented in one way or another in Christian, Islamic and Jewish culture. All of this would evolve into the belief that demonic entities could be trapped and locked inside certain objects.

With so much history, demon traps are meant to be dug up from time to time in the modern era, and this happened in 2014, when English archaeologists lifted the planks of an abandoned house and found the place where carved crisscrossed lines and symbols were engraved. indicative of a demonic trap. The discovery was made in a majestic mansion called Knole, in Kent, England, which was acquired by the Archbishops of Canterbury in the 15th century and later ceded to Henry VIII and remodeled in the 17th century. The mansion is quite famous, as it was the birthplace of poet and garden designer Vita Sackville-West and it was also the scene from Virginia Woolf’s novel Orlando, but apparently these demon traps really captivated her imagination.

Symbols and marks were discovered by the London Archeology Museum , which was undergoing structural reforms, dating back to the year 1606. This would have been just when the dissidents led by Guy Fawkes, the conspirator who inspired the face of Anonymous, were planning to use terrorist tactics against King James I. And that could be the reason why demon traps were placed, in order to trap this negative energy and the vile spirits it generated.

It has been speculated that the intersecting lines, marks and symbols were created by a craftsman in response to a visit from King James I to protect him from harm. They are carved on floors, beams and other areas, especially the room and around the fireplace, which is considered a witch’s weak spot.

Although the capture of demons has been going on for centuries, this type of practice still continues today. We do not recommend any type of strategy to carry out the demonic capture, but if you still want to try it, we’ll show you how to do it.

The ritual complex requires the following: A pentagram to draw the area where we will contain the demon. It will be drawn with a mixture of red ink (to simulate blood) and pure gold dust and should be in a large room to cover the 6 meter diagram.

The tops of the stick should be filled with salt, but keep in mind that, if the salt is visible, the demon will detect the danger. So you have to hide the salt. Any demonic being can be considerably weakened if it is trapped in a pentagram specifically adapted to its nature (weakness). To attract it into the trap, you must place the element of greatest attraction for the Devil in the center of the stick: place it and hold it firmly in this place. Once the staff is active, it will quickly move towards it, but you will not be able to reach it, no matter how hard you try. You have to keep in mind that the demons will try to corrupt you in order to free you. Once trapped, you can hold it in a container prepared for it, as we explained in this article.

Part of our mystical history

As we have seen, the belief in evil spirits and demons has caused the possibility that these entities can be captured, controlled or even dominated. Since these myths encompass cultures and countries, it is worth thinking if there is a truth in all of this. The truth is that it is an interesting part of our mystical history little known to the world, but which is omnipresent.

Do these symbols and rituals have power over the creatures of another kingdom? Do they have the key to banishing the evil that has plagued humanity and has become a powerful force in legend and folklore?

Advertisement. Scroll to continue reading.
In this article:demon trap, Seal of Solomon