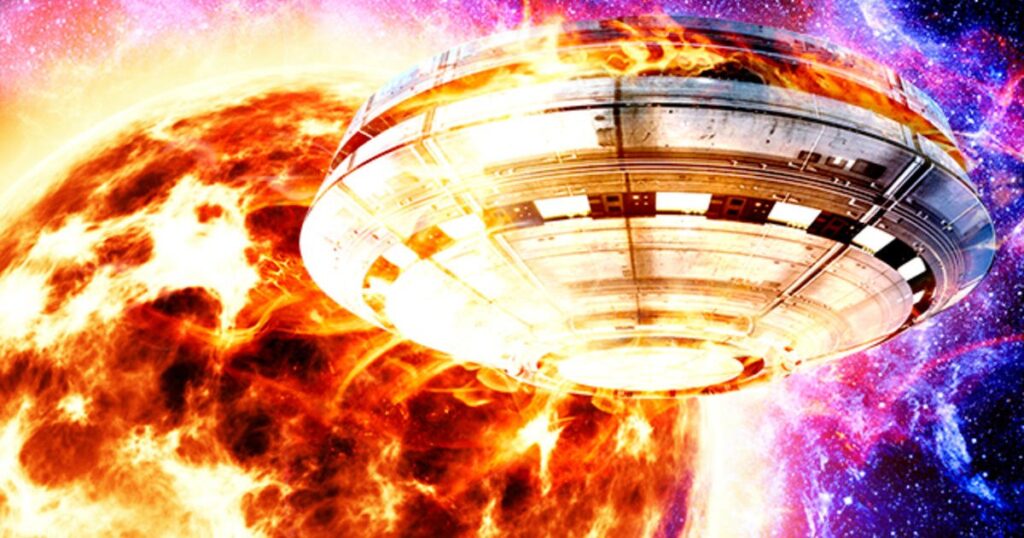 Not only independent researchers, but also many world-renowned scientists have repeatedly expressed hypotheses that our Sun is an intergalactic portal through which ships of extraterrestrial civilizations move into our solar system.

The sun can be used as an intergalactic spaceport and teleport to move around the universe. Our Sun is only one of the intermediate points.

On March 27, 2021, a European solar observation satellite recorded a seemingly ordinary and small flare compared to the Sun. not even a flare, but a small burst of solar matter near the active zone, but if you zoom in on the image, you can see that this flare was produced by a UFO that flew out from the interior of the Sun.

“I was watching Helioviewer when I noticed an explosion. When I looked at this place in close-up, I saw that a black object flew out from the area of ​​the explosion, which crossed the field of view in 10 minutes. Also during the explosion there were three waves of ripples opposite the UFO, the UFO area was the only place where there were no such waves.”

However, in reality, the object looks like a solar flare bursting from the surface. This is a common occurrence on the Sun. Astronomer Chris Impey of the University of Arizona says most UFOs have “down to earth” explanations.

There are billions of objects in space around Earth that more than likely inspired alleged UFO sightings, he said. The astronomer writes in his blog:

“Most UFOs have mundane explanations. More than half can be attributed to meteors, fireballs and the planet Venus. Such bright objects are familiar to astronomers, but often not recognized by members of the public.”

Advertisement. Scroll to continue reading.
In this article:intergalactic portal, Sun