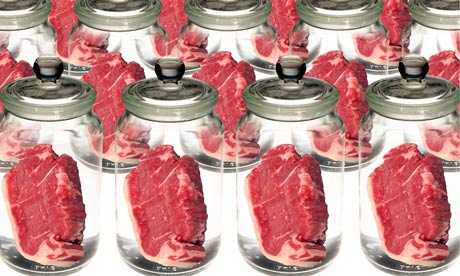 The future feast is laid out around a cool white room at Eindhoven’s University of Technology. There is a steak tartare of in-vitro beef fibre, wittily knitted into the word “meat”. There are “fruit-meat” amuse-gueules. The green- and pink-striped sushi comes from a genetically modified vegetarian fish called the biccio that, usefully, has green- and pink-striped flesh. To wash this down, there’s a programmable red wine: with a microwave pulse you can turn it into anything from Montepulciano to a Syrah. For the kids, there are sweet fried crickets, programmable colas and “magic meatballs”. These are made from animal-friendly artificial meat grown from stem cells: packed with Omega 3 and vitamins, they “crackle in your mouth”. Yum.

None of this is quite ready to dish up. The meatballs at the Eindhoven future food show are made from Plasticine; the knitted steak, appropriately, from pinky-red wool. But the ideas aren’t fantasy. Koert van Mensvoort, assistant professor at the university, calls them “nearly possible”. Van Mensvoort – who is also the brains behind nextnature.net, a must-see website for technological neophiliacs – put his industrial design undergraduates together with bio-tech engineers, marketing specialists and a moral philosopher, tasking them to come up with samples of food that is, technologically, already on our doorstep.
The truth, though, is that artificial steak is still a way off. Pizza toppings are closer. The star of the Dutch research into in-vitro meat, Dr Mark Post, promised that the first artificial hamburger, made from 10bn lab-grown cells, would be ready for “flame-grilling by Heston Blumenthal” by the end of 2012. At the time of writing it is still on the back burner. Post (who previously produced valves for heart surgery) and other Dutch scientists are currently working over the problem of how to turn the “meat” from pieces of jelly into something acceptably structured: an old-fashioned muscle. Electric shocks may be the answer.
What’s cooking? An example of ‘nearly possible’ fantasy food. Photograph: Observer This quest is key to the future of food. It’s not what can be done but what we will accept. Some scientists warn that trying to copy the meats humans are used to is futile – another symptom of our ignorant and unsustainable nostalgia about food. “It’s simplistic to say ‘natural is good’, to reject globalisation and hark back to a mythical past when food was still ‘true and honest’,” says the Dutch intellectual Louise Fresco, a former head of food- innovation research and an advisor to the UN.
“It’s the default thing to do, to try and replicate what you know,” warns van Mensvoort. “It’s not how you innovate. We started with horseless carriages, but in the end what we got was cars. ‘Natural’ is the biggest marketing scam, and the most successful, of all.”
The technological problems of producing the new hi-tech foods are nothing compared to the trouble the industry is having with the consumers – the “yuck factor”, as the food technology scientists across the world like to put it. Shoppers’ squeamishness has turned the food corporations, from whom the real money for R&D will have to come, very wary, and super-secretive about their work on GM in America. There’s energy behind these projects because of the certainty that 9 billion human beings cannot possibly go on eating food, especially meat, produced in the traditional way. The planet can’t take it. Dutch food companies need to cater to a population that eats more pork than any other in Europe, but they do not publicly fund Koert van Mensvoort’s work at Eindhoven, or any of the artificial-meat research. That’s done by the Dutch government.
Van Mensvoort is contemptuous of the food corporations’ nervousness, especially when so much is at stake, pointing out that “if the industry sees a word like ‘pharmaceutical sushi’ they say, ‘You can’t put our name near that!’ They’re afraid.” I have first-hand experience of this: at a scientific conference on food and nano-technology (engineering at sub-molecular level) an executive from Europe’s biggest food company begged me not to print the fact that he was there.
It’s all Monsanto’s fault.