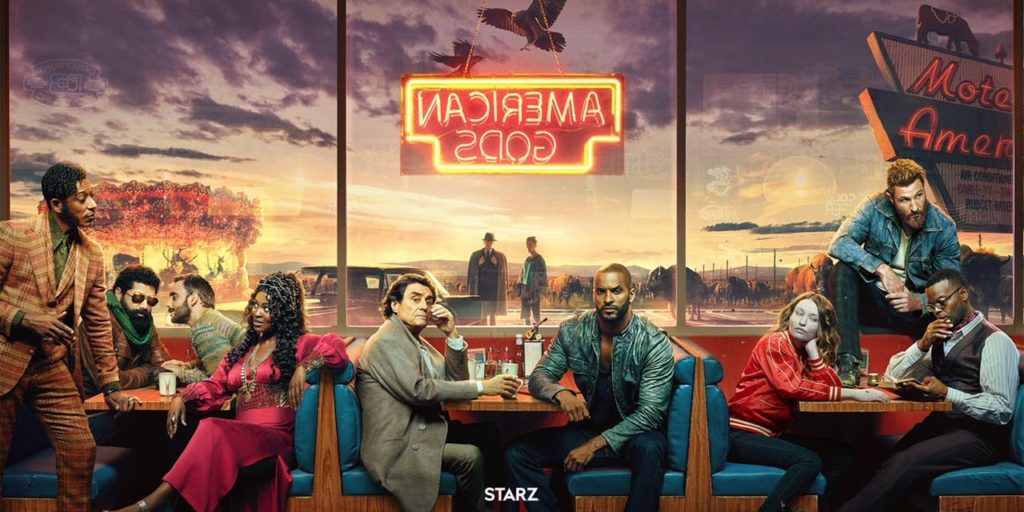 American Gods season 2 brings the Old Gods to Wisconsin’s phantasmagorical roadside attraction known as the House on the Rock.

“So what is this place?” Shadow asks Wednesday in Neil Gaiman’s novel American Gods as they approach the entrance of a building. The unremarkable facade described in the book conceals what is in real life one of the most surreal and often nightmarish places ever conceived. And it’s tucked away deep in the wild weird yonder of Wisconsin.

“This is a roadside attraction,” Wednesday tells Shadow. “One of the finest. Which means it is a place of power.”

“It’s perfectly simple,” Wednesday continues. “In other countries, over the years, people recognized the places of power. Sometimes it would be a natural formation, sometimes it would just be a place that was, somehow, special. They knew something important was happening there, that there was some focusing point, some channel, some window to the Immanent. And so they would build temples or cathedrals, or erect stone circles, or…well, you get the idea.”

Wisconsin is home to many places considered sacred and powerful by the indigenous people, like the mystic Devil’s Lake near Baraboo, or Green Lake, where every member of the Winnebago tribe was said to make a pilgrimage at least once in their lifetime to pay tribute to “the spirit who dwells beneath the water” in the depths of the state’s deepest natural inland lake. But for Gaiman’s Old Gods, including Mr. Wednesday, Easter, Bilquis, Jinn, Mad Sweeney, Czernobog, and others, the place they choose to meet is the bizarre and whimsical attraction known as the House on the Rock.

The House on the Rock is an ode to eccentricity and obsession, a twisting labyrinth of rooms filled with elaborate displays ranging from intricate reproductions of the Crown Jewels to a 200-foot-tall battle between a whale and a giant octopus. It was built upon a large sandstone formation overlooking the lush green valley below by Alex Jordan Jr., a man described by journalist Marv Balousek as “a shadowy figure as reclusive as the late multi-millionaire Howard Hughes.”

“When ‘Ripley’s Believe It Or Not,’ a prime-time network show, did a segment on the House, Jordan ignored multiple interview requests,” Doug Moe writes. “The show’s host ended the segment standing in front of the World’s Largest Carousel, a favorite House exhibit, and saying, ‘Thank you, Alex Jordan, wherever you are.’”

Balousek and Moe both wrote books about Jordan. Balousek’s book, House of Alex, was published in 1990, shortly after Jordan’s death. It was as an expose on the “true story of architecture and art, greed, deception and blackmail.” Soon after its publication, Moe was hired by the attraction’s new owner to produce an authorized biography that would be a bit gentler on Jordan’s legacy.

Moe interviewed many people close to Jordan, including some who worked for him for decades. He says they all described Jordan as “a complicated mix of hubris and shyness, cruelty and kindness.”

“There was a fire burning there,” Tom Kupsh told Moe in 2014. Kupsh worked at the House on and off since Jordan hired him as a sculptor in 1977, and also wrote a book about him called Never Enough. “You could be singed or you could be warmed. There wasn’t a lot of middle ground.”

Mythic and elusive, Alex Jordan himself could have been one of the American Gods. 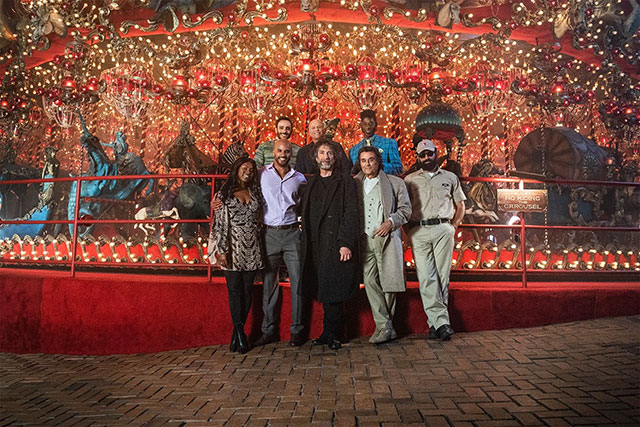 Neil Gaiman and the Old Gods at House on the Rock

Even the lore surrounding the creation of the House is legendary.

The story seems to originate from a statement once made by Madison, WI artist Sid Boyum. According to Boyum, he accompanied the Jordans (Jr and Sr) for a meeting with a man they admired greatly – the one and only Frank Lloyd Wright. They supposedly met with Wright at his Spring Green, WI estate called Taliesin (where a brutal mass murder happened in 1914) to show off some blueprints for a building Jordan Sr. had designed in Madison. After looking at the plans, Wright is said to have told Jordan, “I wouldn’t hire you to design a cheese crate or a chicken coop.”

Angered, Jordan decided to spite Wright by building his architectural masterpiece just down the road from Taliesin.

The problem with this story, according to the  website, is that Boyum and Jordan Jr. were both less than 9 years old at the time the incident was said to happen (between 1914 and 1923), Wright was in Japan working on the Imperial Hotel from 1916 to 1922, and the building Boyum claims Jordan Sr. showed Wright was actually designed by another architect altogether and built in 1923.

Boyum, it seems, invented the story because he thought Jordan should be “more like PT Barnum.” 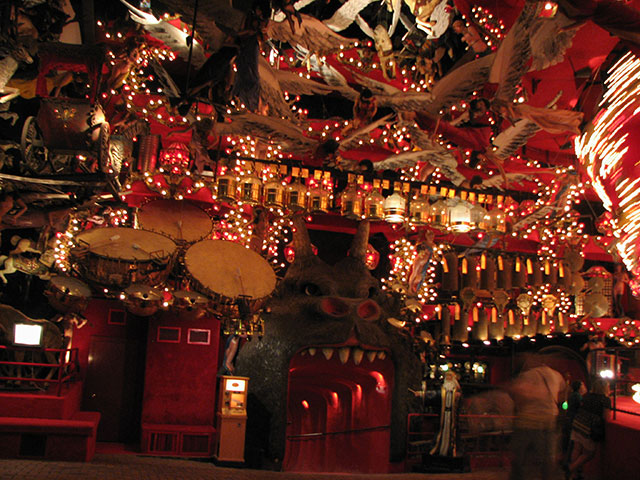 Though the story is untrue, the House does have an overtly defiant atmosphere. Every detail of the House, its very existence, seems to be thumbing its nose at the improbable and illogical.

“Though most people outside of the Midwest have never heard of it, the House on the Rock is said to draw more visitors every year than any other spot in Wisconsin,” author Jane Smiley wrote in 1993. “Also in the Wyoming Valley, but on top of a huge monolith, the House on the Rock reveals the spirit of its builder, Alex Jordan Jr., to be as single-minded and eccentric as Wright’s, but in substance almost absurdly opposed.”

Jordan discovered Deer Shelter Rock in the early 1940s and began having picnics upon its 75-foot-tall peak. Eventually he decided to bring a tent and started camping there. But then, one night, his tent blew away and he decided he needed something more permanent. Fortunately, he had some experience working for his father in construction. 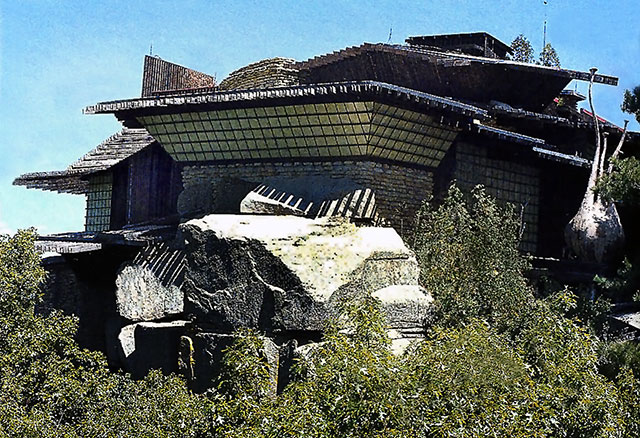 House on the Rock in Spring Green, Wisconsin

Jordan began carrying materials up the rock to build the House before he even owned the land. He first built what he described as a shack, which he tore down and rebuilt. He called the next incarnation The Winter Room, which he used as a private studio retreat. He added 12 more rooms in the following years, never with any kind of plan. He followed the natural contours of the rock, exploring new ideas and methods. If something wasn’t working, he would tear it down and try something else.

“In the beginning it was all just a pile of rock up there – rocks and trees,” Jordan said in a rare interview. “We left everything as it was, worked around it, worked with it – that’s part of the beauty of the place.”

“As curiosity grew surrounding his project, Alex became somewhat irritated,” the website says. “Alex decided he was going to charge people 50 cents to visit, thinking that would drive them away; however, people gladly paid the fee. In 1960, Alex decided to open the House on the Rock to the public. This increased the interest and the crowds grew. All of the money taken in over the years was put directly back into the House on the Rock. Alex had no other source of income.” 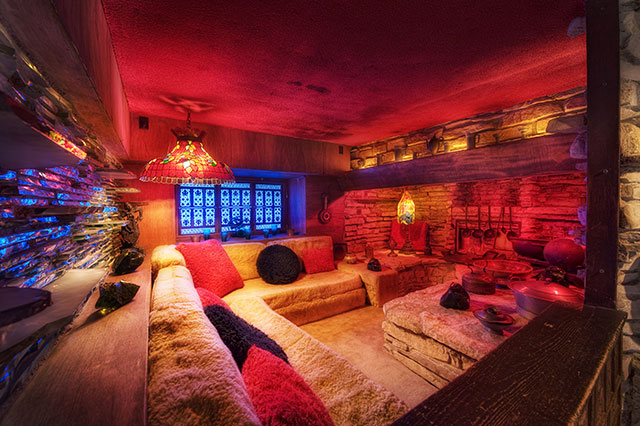 Jordan’s dream for the House evolved to include more than the dim, labyrinthine, Japanese-style structure he first built atop the rock. His eclectic interest drove him to collect art and strange objects from around the world. But when that wasn’t enough, he hired artists to help to create the obsessive collections he desired. That’s when things got really strange.

Today, the House is a twisting complex of bizarre spaces and unique collections. There are entire rooms filled with orchestras of out-of-tune self-playing instruments, and a horse-drawn hearse with a music machine inside where coffins would have resided. There is the Streets of Yesterday, an immersive recreation of an old time main street complete with houses, shops, a sheriff’s office with an outlaw’s head in a jar, and, of course, a massive calliope parked in the street. There is the Infinity Room that juts out 218 feet from the house unsupported, and you can feel it sway at the tip. There are arms and armor, macabre coin-operated dioramas from the 1800s, a massive ship engine in the Organ Room, a steam-powered hearse, miniature circus dioramas, dollhouses, and other curiosities that are either genuine antiques or reproduced by Jordan’s team in excess.

And there is the carousel – the largest indoor carousel in the world. It boasts 269 animals (none of which are horses), 182 chandeliers, 20,000 lights, and is the portal in American Gods to another dimension where the Old Gods meet.

Writing in the woods. Pretty happy.

Gaiman, a part time resident of Menomonie, WI since 1992, wrote American Gods at a lakeside cabin about 20 minutes from his home.“I couldn’t have written it without living in Wisconsin,” he told the Star Tribune. “There’s that tiny off-kilter nature in the Midwest that’s in the details.”

Gaiman kicked off his American Gods 10th anniversary tour with a Gathering of the Gods event that took place at the House on the Rock over Halloween weekend of 2010. Cult contributor J. Nathan Couch was in attendance. Costume contest winners had the truly once-in-a-lifetime opportunity to ride the carousel with Gaiman.

“The House on the Rock is a real place about an hour west of Madison Wi, that I write about in American Gods,” he wrote on his website when he announced the event, “and I had to tone down my description of it and leave things out in the book in order to make it believable.” 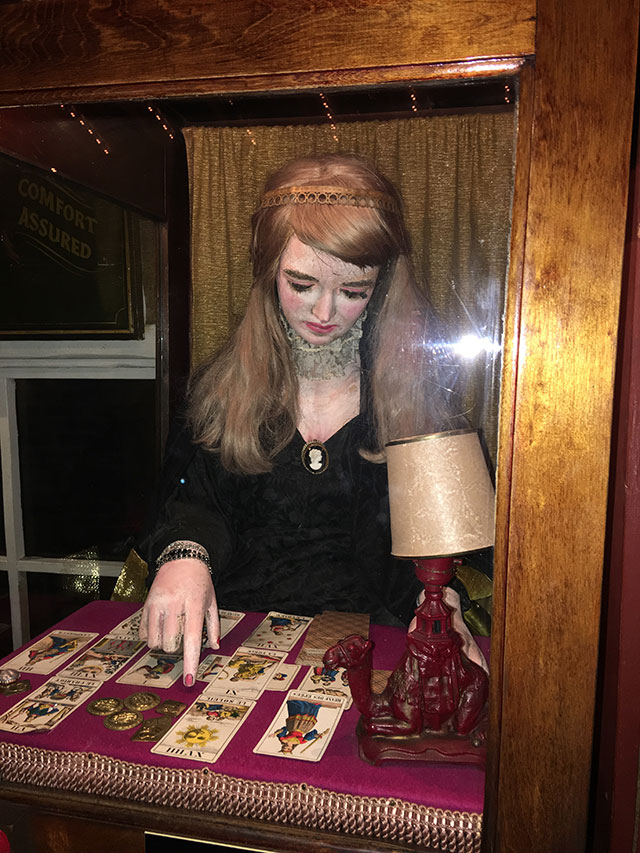 Wednesday tells Shadow they must “consult the Norns,” getting a fortune from the coin-operated fortune teller in the Streets of Yesterday.

American Gods filmed the House on the Rock scenes for season 2 on location in May of 2018.

“When you read Neil’s description of it in the book, you think it can’t possibly be weirder seeing it in person,” Orlando Jones, who plays the trickster God Mr. Nancy, said. “But it far surpasses his description. That’s insane, because I didn’t think that was possible.” 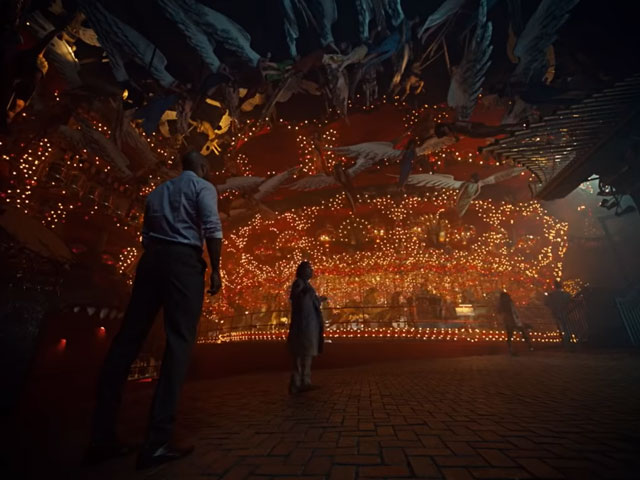 Wednesday, Shadow, and the rest of the Old Gods come to the House on the Rock in American Gods season 2

Jordan never lived in the House, though he and his lifelong love interest Jennie Olson were known to throw “legendary parties” there. He and Jennie lived in small adjoining apartments in a Madison building owned by his parents.

Jordan died in 1989, a year after he sold the House to a friend. Upon his request, his ashes were spread over the creation he spent his life dreaming and building.

The House on the Rock is indeed a place of power. And madness. And wonder. And it’s hard not to fall in love with it.

Advertisement. Scroll to continue reading.
In this article:American Gods season 2, House on the Rock