The incidence of childhood cancers has been steadily rising for several decades, to such an extent that cancers in young people now have their very own day in the limelight: International Childhood Cancer Day (February 15). For American children ages one through 14, cancer is the top disease-related cause of death, second only to accidents among all causes of childhood mortality. Leukemia and malignancies of the central nervous system are the most common types of childhood cancers.

A recent opinion piece in The Hill points out that autism spectrum disorders (ASDs) have increased in lockstep with pediatric cancers. One in thirty-six (2.76%) children aged three-17 had an ASD diagnosis as of 2016, compared to one in 10,000 children in the 1970s. The parallel rise in the two conditions is not a fluke—environmental toxins are widely known to “initiate or aggravate various neurological disorders [and] carcinomas.” Although the National Cancer Institute (NCI) views environmental causes of childhood cancers as “difficult to identify,” one route of exposure to heavy metals and other toxic substances that begins prenatally and continues through adolescence is sitting in plain sight: the bloated U.S. vaccine schedule.

How autism and cancer overlap
The Hill commentary points readers to a 2017 article published by Harvard researchers in Medical Hypotheses that spells out numerous commonalities between ASD and cancer. Drawing on the disparate fields of genetics, bioinformatics and epidemiology, the Harvard authors describe autism and cancer as conditions that, on the surface, display quite different “deviations in development and function,” but at a deeper level, these differences derive from overlapping genes and pathways.

In support of this position, they note that a “remarkable” number of genes are associated with both ASD and cancer, and many of the cancer-associated genes also play key roles in neural development. In addition, autism and cancer share common signaling pathways involved in mitochondrial function and metabolic modulation. Mitochondrial dysfunction and metabolic problems are features of cancer, ASD and other neurodegenerative diseases. In addition, ASD researchers have noticed how mitochondrial dysfunction frequently is present in conjunction with a toxic metal burden, and other investigators have demonstrated mercury– and aluminum-related mitochondrial toxicity in connection with various neuropathologies. There is also evidence linking heavy metal exposure to metabolic disorders.

…investigators have demonstrated mercury – and aluminum-related mitochondrial toxicity in connection with various neuropathologies.
How vaccines tie in
In 2010, the U.S. Court of Federal Claims handed down a landmark decision that conceded a clear association between autism, mitochondrial dysfunction and vaccines. The Court awarded the petitioning family compensation after concurring that vaccines against nine diseases administered in a single doctor’s visit had exacerbated an undetected mitochondrial disorder in an 18-month-old, resulting in autism.

Many of the vaccines in question (and still in use) contain carcinogenic and neurotoxic ingredients, such as formaldehyde (carcinogenic in humans), polysorbate 80 (a possible carcinogen based on animal data) and aluminum adjuvants (linked to numerous neurological diseases) (see table). Injected aluminum is particularly prone to accumulating in the brain and other organs, where it can remain for years. Likewise, injected thimerosal (about half of which is ethylmercury) moves rapidly into the organs and has a half-life spanning years or even decades. Although thimerosal is only present as an explicit ingredient in a few U.S. vaccines, its inclusion in the vaccine manufacturing process also leaves residual mercury in some vaccines. Outside of Europe and the U.S., thimerosal-containing vaccines are still the norm. 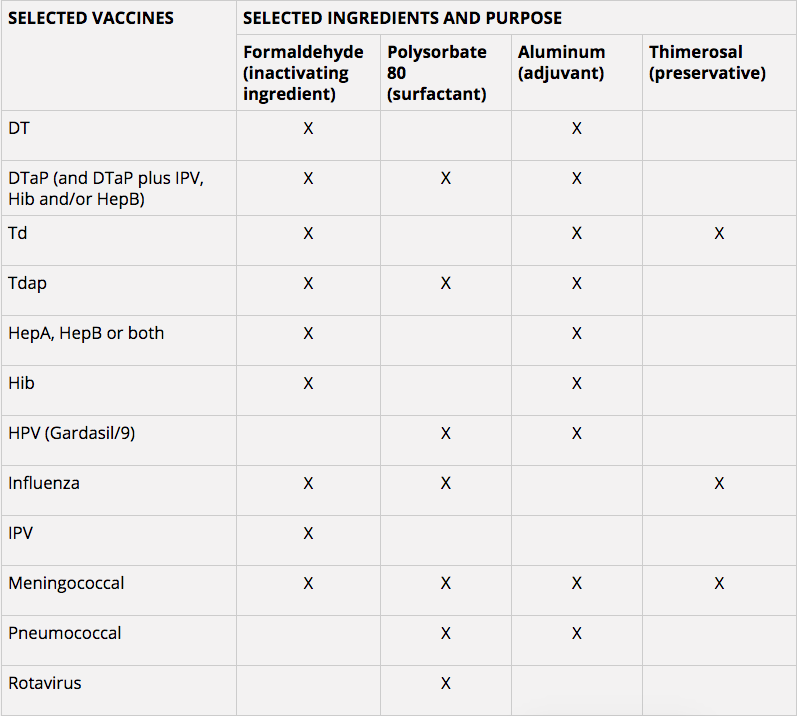 Monosodium glutamate (MSG) and other forms of excitotoxic glutamate are another far-from-reassuring vaccine ingredient, present in some influenza vaccines as well as in measles-mumps-rubella (MMR) and varicella vaccines. Neonatal exposure to MSG has the potential to modify blood-brain barrier permeability. Glutaraldehyde (included in DTaP and Tdap vaccines) is a chemical disinfectant that also has industrial applications as a tanning agent, a component of embalming solutions, a cosmetics preservative and a paper industry “slimicide.”

Vaccine manufacturers disclose all of the just-described ingredients. However, Italian researchers have discovered that vaccines also are almost universally contaminated with metal debris and biological contaminants not declared in the package inserts. Many of these contaminants are nanosized. In light of these findings, it is disturbing that vaccine scientists are gung-ho about expanding use of still largely untested nanotechnologies to develop nanovaccines. Many existing vaccines also use recombinant DNA technology to genetically modify vaccine components, with more of these non-traditional vaccines in the pipeline.

Italian researchers have discovered that vaccines also are almost universally contaminated with metal debris and biological contaminants not declared in the package inserts.

Researchers agree that viruses and infections or immune responses to infectionsrepresent triggers for childhood leukemia and other childhood cancers. Likewise, “uncommon” viral infections “have been conclusively linked to autism causation.” Given that next-generation vaccines, in particular, genetically engineer their bacterial and viral components and use ever-more-powerful adjuvants, one would expect intense scrutiny to assess the potential cancer and other health risks of these newer technologies. Instead, entities with a vested interest in the status quo continue to ensure that vaccines get a free pass.