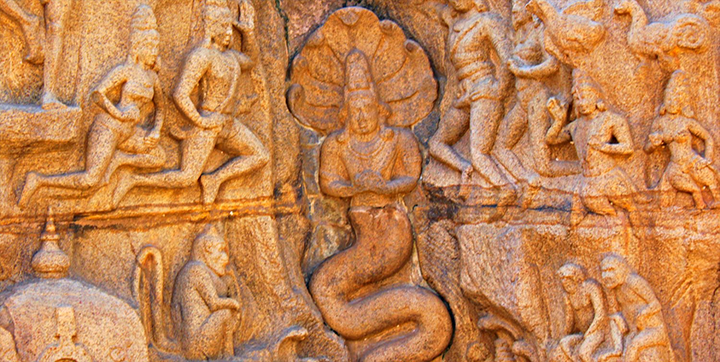 We are at Mahabalipuram in India, and I am gonna show you world’s second largest bas-relief called “Arjuna’s Penance” carved 1300 years ago. This relief is about 96 feet long and 43 feet tall. It’s very intriguing because the carving seems to prove the ancient astronaut and shapeshifting reptilian theories of our times.

According to the reptilian theory, Reptilians are shape shifting aliens who live underground and are capable of flying and transforming into humans. Sounds like some guy created this bizarre concept in 2001, and is the most ridiculous thing you’ve ever heard, right?

How about everything I just said about the reptilian theory has been carved accurately, 1300 years ago? Let’s take a good look at this. The center of attention is clearly on “Two Snake Gods” coming out of the ground, cracking the earth open. They are shown with half human and half snake bodies.

Notice that there is a third “God” below the second one, who is not yet transformed and has a snake’s body in full. This shows that these Gods transformed into humanoids as they approached the earth’s surface. These reptilian “Snake Gods” or “Nagas” have been documented in many ancient Hindu and Buddhist texts.

Archaeologists are baffled by this carving, because they cannot come to a conclusion as to what it shows. Some people claim that the primary focus of this is Arjuna doing a penance. Do you think this skinny man carved in an inconspicuous location is the focus of this carving? Even to a lay man, it seems like the rock has been split into two equal halves and the primary focus seems to be on these figures that are coming out of the ground, and taking off vertically into the sky.

If it does in fact show that these reptilians are blasting off like modern day rockets, there are a lot of other features that support this theory. You can see a lot of Animals getting rattled because of the blast off. Different species of agitated animals like deer, lions and monkeys are shown. It’s only normal that the animals would get uncomfortable when there is a huge lift off nearby. The only exception to this is a brave male elephant standing, only to protect the scared baby elephants between his legs.

Now, look at the hand signal on almost every human being. Their hands are all pointing at a 45 degree angle upwards and directly towards the center figures that are taking off. To be honest, I have been to more than 2 dozen ancient sites in India and I have never seen this hand gesture anywhere else. It just doesn’t make any sense. Notice that on the top, on either side, there are two men with large helmets giving the same hand signal.

With all the commotion going on, there is an elderly man who is calmly observing the astronauts take off.

Another interesting thing to be pointed out is that there are no mainstream gods whatsoever in this carving at all. Even Hindu theologists are baffled that there is no Shiva, Vishnu or any other notable God in this relief. And a scene like this is not described anywhere in the thousands of Hindu scriptures that we have.

These Nagas of Hindu mythology are very similar to Nachash from Jewish mythology. A Naga is also called Sarpa by Hindus, and is called a seraph by Jews and Christians. Invariably, all scriptures refer to them as flying Gods or angels. There is also a tribe called Nagas who live in the jungles of India. They believe that their serpent Gods originally came from planet Jupiter.

In this article:Hindus, reptilian theory 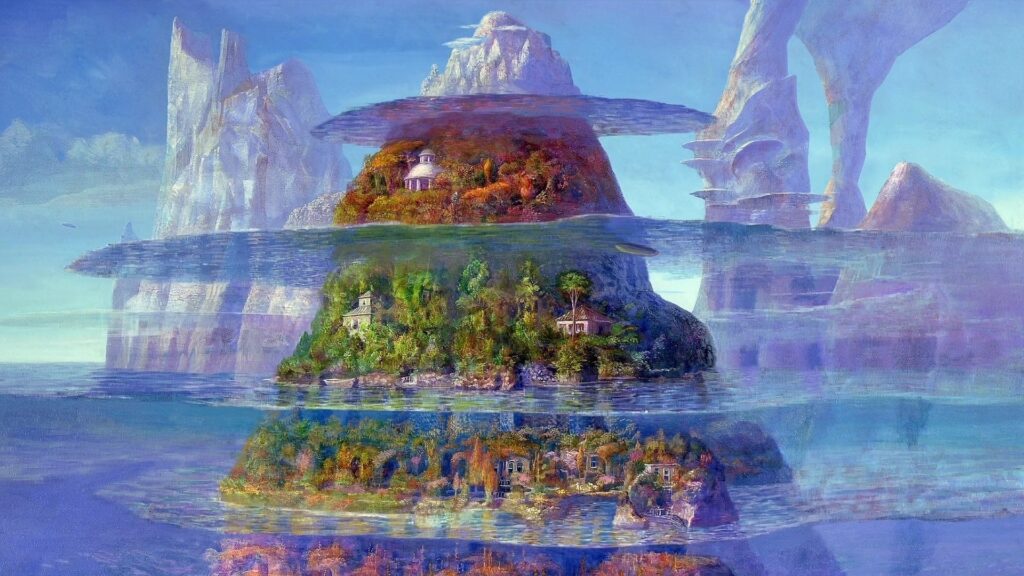 Sacred Mount Meru: home of the gods and center of the universe

According to Hindu records, Christians believe that the earth is the center of the universe. In contrast to this belief, the Hindus consider Mount Meru...