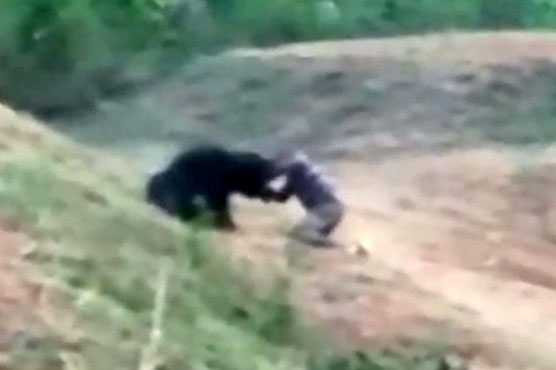 The selfie craze has claimed yet another victim this week with the loss of a taxi driver in India who decided to take a photograph with a bear. On his way home from a wedding alongside other guests, Prabhu Bhatara from Odisha in east India needed a toilet break, and it was then that he saw the bear which appeared to be injured.

Despite warnings against his actions from the others of his group, he pulled out his phone and walked up to the animal.

The bear attacked, and Mr. Bhatara was unable to free himself from the onslaught.

Footage taken by some of the onlookers has been released which shows the struggle. It also shows how some of the bystanders attempted to help the man by hitting the bear and throwing heavy rocks at it. The disturbing video reveals the screams of the bystanders as Prabhu Bhatara attempts many times to get away only to be thrown down again by the predator. A dog rushes in but is unsuccessful in rescuing the injured man.

The taxi driver’s struggle eventually weakens. The video ends with the bear sitting in a cage, awaiting treatment for its injuries. His death has become the third in recent months for India about animal selfies. Two men died in separate instances in December 2017, both crushed to death by elephants. India also holds the highest number of selfie deaths per year. From March 2014 to September 2016, there have been 127 selfie deaths worldwide. More than 70 of those deaths were in India.

World Animal Protection has pointed out that this animal selfie craze is not always in the best interest of the creature itself. An organized animal photo generally involves abuse of the creature that is forced into an unnatural situation.

Selfies are for much harmless fun, but the obsession with capturing that perfect moment has led some people to their deaths and caused others to exercise very poor judgment. In England, a man faced backlash online after posting a selfie of himself at Westminster in the spot where last year a terrorist drove a car into a crowd, killing six. Also in London, Force Gate North police had to issue an apology after two of its officers tweeted a double selfie at a crime scene where a 20-year-old had been stabbed to death.