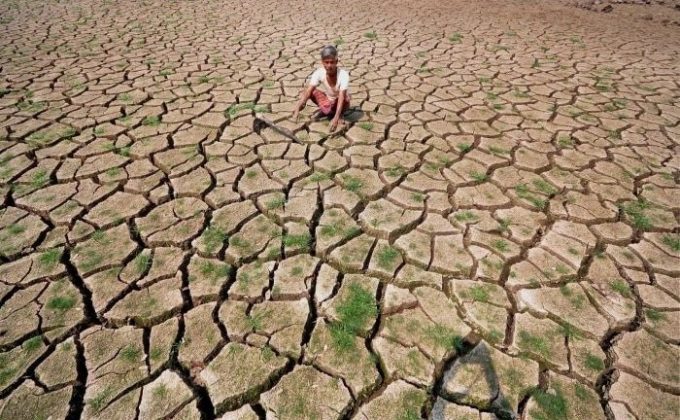 Narendra Modi had begun his first regime in 2014 on a drought note.

It was followed by another drought in 2015. This was said to be the first instance in a hundred years when India faced back-to-back drought years.

Narendra Modi won a bigger mandate in 2019 and India is staring at another spell of drought if the current trend of rainfall shortage continues.

In the pre-monsoon season or between March 1 and May 31, the rainfall deficiency was 25 per cent. It has been increasing since then.

Between May 30 and June 6, the IMD data says, the rainfall deficiency increased to 40 per cent.

According to the Drought Early Warning System, 43 per cent of India is currently under the spell of drought. Situation in Maharashtra, Karnataka and Tamil Nadu is grim.

It is not much better in Gujarat, Rajasthan and Andhra Pradesh.

About half of Maharashtra – including the districts of Latur, Beed and Osmanabad in Marathwada region – comprising nearly three-fourth of 36 districts of the state are facing severe drought situation.

In Karnataka, two dozen of its 30 districts – nearly 80 per cent – are reeling under drought.

News reports suggest that over 80 lakh farmers in the two states are affected by drought.

Monsoon is weak and delayed. It reached Kerala on Saturday after a delay of a week.

In its forecast, the IMD said monsoon is likely to be below normal – 96 per cent of the long period average (LPA) with 41 per cent possibility of a normal monsoon.

The IMD said El-Nino phenomenon (heating) of the Pacific Ocean will impact early phases of monsoon before going neutral in the latter part of the rainy season.

Prediction of a below normal monsoon came with a possible variation of eight per cent. And, this holds true, 2019 may be the fourth drought season since 2014.

In 2014, India had 12 per cent monsoon rainfall deficiency leading to severe drought in many states. In 2015, deficiency was 14 per cent that aggravated farm crisis and protests were seen at many places.

Last year, even though Kerala floods dominated the news cycle, the large parts of the nation faced drought. June to September monsoon season was deficient by 9 per cent in 2018.

The drought situation became critical in South Indian states, which recorded a 44 per cent deficit in northeast monsoon – the main rainy season in the region. It was the sixth biggest shortfall since 1901. Overall annual rainfall was 15 per cent less in 2018.

Sensing the urgency to address the drought and water deficiency crisis, Prime Minister Narendra Modi created a new ministry – Jal Shahkti as he had promised at a public rally in Tamil Nadu during the Lok Sabha election. But PM Modi’s date with rain god has remained sour till date.

The Central Water Commission (CWC) earlier this week said water storage in most reservoirs in west and south has dipped to less than the average of last 10 years indicating a worsening water crisis.

Surprisingly, resolving water crisis and fighting drought were not among top election issues. But these could cause severe headache for the Modi government if left unaddressed.

According to Lokniti-CSDS survey, 47 per cent of farmers voted for the BJP saying that despite lingering farm crisis, PM Modi should get another chance.

Advertisement. Scroll to continue reading.
In this article:India, weather drought