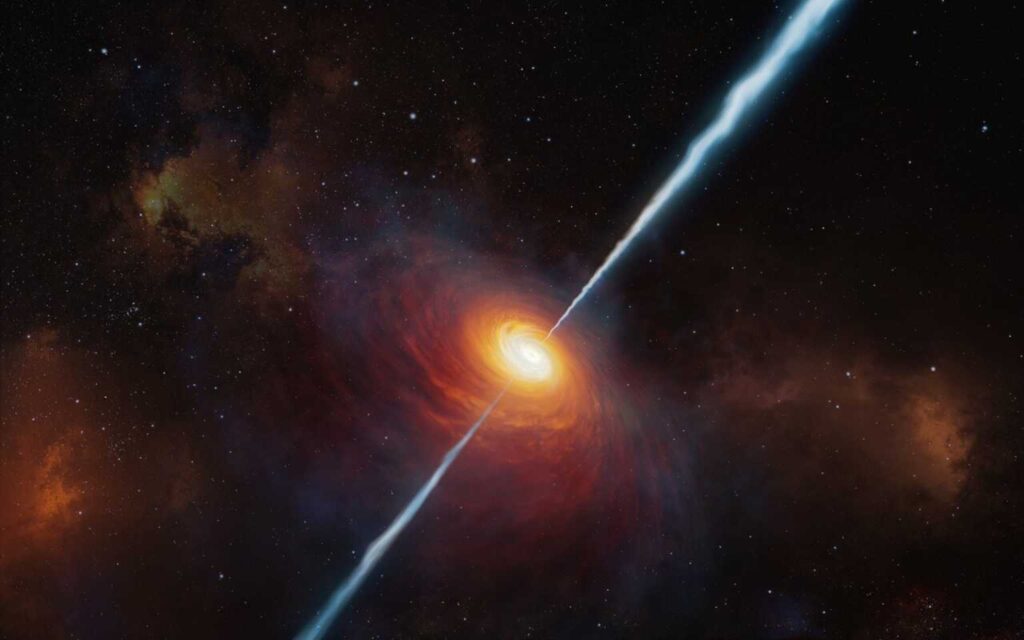 Scientists have discovered the most distant bright source of radio waves in the known universe. It is a black hole with a mass of 300 million suns, almost unmatched in gluttony.

Τhere is a supermassive black hole at the center of every large galaxy. The gravity of this monster causes the surrounding material to fall on it. Matter falling onto the black hole swirls into a disk-shaped cloud, which is heated by internal friction. At the same time, colossal energy is released, and the incandescent substance shines brightly in almost all ranges of electromagnetic waves. Therefore, paradoxically, it is black holes (more precisely, the clouds of matter surrounding them) that are the most powerful sources of radiation in the Universe.

However, supermassive black holes are very different in brightness, which depends both on the mass of the “predator” and on how much matter is available to it for absorption. The brightest of them are quasars. Therefore, they can be seen at colossal distances.

The most distant known quasar has a redshift of 7.5. This means that its light has spent over 13 billion years traveling to Earth. When it was emitted, only about 700 million years had elapsed since the Big Bang, or roughly 5% of the current age of the universe. Thus, distant quasars are a kind of window into the infancy of space.

Some quasars have an interesting feature – jets . These are jets of particles that are ejected from the vicinity of the black hole at near-light speed. The mechanism of their formation is still not entirely clear.

Quasar jets emit radio waves. But only 10% of all quasars have “tails” brightly shining in the radio range. Astronomers call these quasars radio-loud.

The authors of the new study have discovered the most distant radio-loud quasar to date. It was designated PSO J172.3556 + 18.7734, or, for short, P172 + 18. This object is only slightly closer to Earth than the most distant of all (not only radio-loud) quasars. The redshift of P172 + 18 is 6.8. In other words, its telescopic light was emitted when the universe was only 780 million years old. The previous record holders can only envy.

“This finding is encouraging I hope and believe that the distance record set by us will soon be broken.” – says the first author of the research Eduardo Banyados ( of Eduardo Bañados ) from the Institute of Astronomy Society Max Planck.

Having studied the “found” with the help of several telescopes, astronomers have calculated the mass of this black hole: 300 million suns. That is, it is 75 times heavier than the supermassive black hole at the center of the Milky Way. On the other hand, science knows black holes with a mass of tens of billions of suns.

But in terms of the rate of absorption of the surrounding substance, P172 + 18 is almost unrivaled. And experts believe that such gluttony is caused precisely by the presence of jets. Jets of particles, accelerated to near light speed, upset the equilibrium of the surrounding gas and cause it to fall into the black hole.

Perhaps this is the secret of the incredibly rapid growth of supermassive black holes in the early universe. Recall that astronomers have long puzzled over how these monsters managed to grow up so quickly.

A research article with the results of the study was published in the Astrophysical Journal.

In this article:black holes, quasars