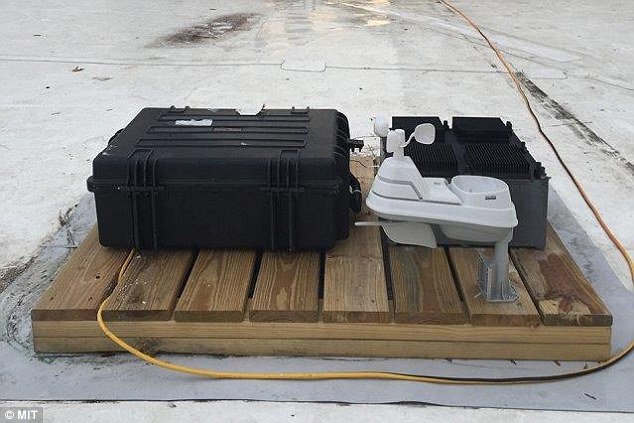 A miraculous device that can generate electricity seemingly out of thin air has been developed by engineers.

Called a thermal resonator, it relies on fluctuations in temperature between day and night to produce electricity.

It can be used without the need for sunlight, batteries or wind, making it ideal for situations where these resources can’t be relied upon.

The technology has the potential to power sensors and communications devices for years without the need for batteries.

Experts at the Massachusetts Institute of Technology’s (MIT) department of chemical engineering are behind the find.

Their gadget is a twist on a thermoelectric generator, which create power when one side of the device is a different temperature from the other.

This could be due to one side being exposed to sunlight, while the other is covered, for example.

The thermal resonator differs in that it uses natural swings in temperature to take advantage of this effect, meaning it can generate charge even in the shade.

Researchers say that the power levels generated by the new system so far are modest.

However, it outperformed a commercially available pyroelectric material – an existing method for converting temperature fluctuations to electricity – by 300 per cent.

In a written statement Professor Michael Strano, who led the study, said: ‘We basically invented this concept out of whole cloth.

‘We’ve built the first thermal resonator. It’s something that can sit on a desk and generate energy out of what seems like nothing.

‘We are surrounded by temperature fluctuations of all different frequencies all of the time. These are an untapped source of energy.’

The thermal resonator was created from materials that can capture heat from its surroundings or release it.

This was comprised of a metal foam, made of copper or nickel, which was then coated with a layer of graphene.

The foam was then infused with a kind of wax called octadecane, which changes between solid and liquid within a particular range of temperatures.

A proof of concept sample of the material produced 350 millivolts of potential energy and 1.3 milliwatts of power in response to a 10°C (18°F) change of temperature between night and day.

This would be enough to power small environmental sensors or communications systems, according to the researchers.

Such systems could provide low-power but long-lasting energy sources for landers or rovers exploring remote locations, including other moons and planets, says Volodymyr Koman, an MIT postdoc and co-author of the new study.

For such uses, much of the system could be made from local materials rather than having to be premade, he says.

The full findings of the study will be published in the journal Nature Communications.

In this article:Electricity, thermal resonator