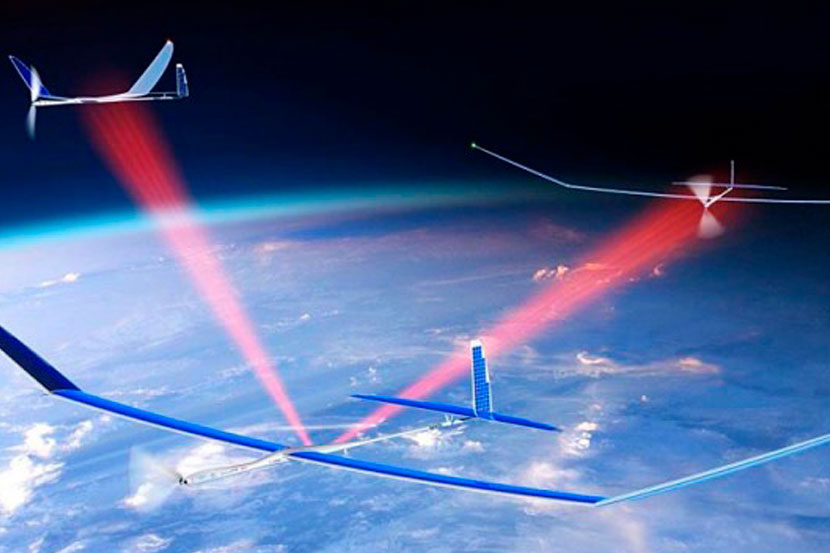 It looks like conspiracy theorists will soon have to arm themselves with high-altitude anti-aircraft missile systems. Two British companies are developing stratospheric drones that will carry cellular base stations on board. A special lightweight antenna of 2048 elements has already been tested, which is capable of providing a coverage area up to 140 kilometers in diameter.

The concept is as follows. A repeater with an active phased antenna array (AFAR) is placed on board an unmanned aircraft. The UAV occupies FL600 – 60,000 feet (18,300 meters). At this altitude, he begins to circle over a given terrain and is able to do this for more than a week without landing. The secret to this endurance lies in the hydrogen propulsion system, as well as the ultralight composite construction.

To reduce the cost of production, slightly modified fuel cells of an unnamed automaker are used, and not the original design. They generate up to 49 kilowatts of electricity, of which 20 kilowatts are intended for the antenna. The rest goes to other onboard equipment and engines. Liquefied hydrogen reserves on board are sufficient for continuous operation for nine days.

The development is carried out by two companies from Cambridge (England) – Cambridge Consultants and Stratospheric Platforms Limited (SPL). The first created a functioning prototype of the antenna, and the second tested it in “combat conditions” with the help of Deutsche Telekom. Real-world tests took place in October over Germany. The Grob G 520 turboprop high-altitude reconnaissance aircraft (more precisely, its unmanned modification H3Grob 520) was turned into a flying base station, and the quality of the connection was checked using a smartphone on the ground.

A scaled-down prototype was used in the tests, and the full-size antenna will be placed on a square base with a side of more than three meters. In a press release, Cambridge Consultants claims it will be the largest commercial antenna ever to fly. Obviously, with such dimensions of the AFAR, the dimensions of the carrier drone will also be considerable.

The developers of this original way of placing base stations have to solve many problems. One of the key ones is the UAV itself, which has not yet been embodied even in the form of a prototype. But British engineers are not discouraged and promise to begin the first air tests of the entire system in 2022. Commercial operation may begin in the mid-2020s.

You can believe in such a pace, given that the most resource-intensive elements in terms of development are either already available for purchase or tested and are almost ready to start production. We are talking about hydrogen fuel cells, special tanks that are adapted for high-altitude flights, and, of course, about the antenna itself.

It’s hard to say how successful this approach will be in deploying 5G networks yet, but it has potential. When transmitting a signal from a great height, the problem of obstacles in its path is removed. You no longer need to set up many base stations due to the fact that houses and landscape interfere. A huge AFAR will allow focusing the beam even at a distance of about 20 kilometers from it to the subscriber, so there should be no problems with signal quality.

As examples of the use of their technology, the developers show the cellular coverage of long highways. Whether the operation of such UAVs will turn out to be cheaper than the deployment of classic base stations – we will find out already in this decade.

In this article:5G towers, microwave frequencies