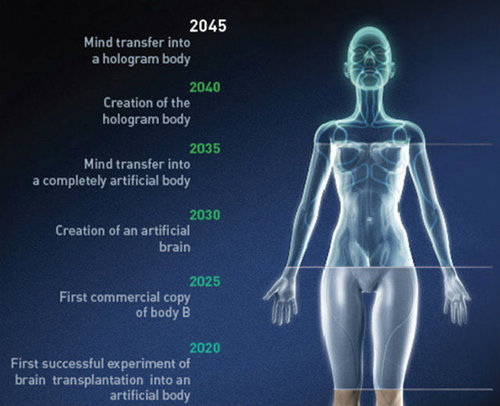 Ray Kurzweil — Singularitarian Immortalist, Director of Engineering at Google, famous inventor, author of How to Create a Mind http://GF2045.com/speakers/.

A world-class prolific inventor and leading futurist author, “the restless genius” (Wall Street Journal) points to 2045 for the technological singularity when A.I. will surpass human intelligence in his New York Times best seller The Singularity is Near, Amazon’s #1 book in science and philosophy.

In this video Ray Kurzweil discusses his predictions about radical life extension,  singularity, life expansion and the imminence of physical immortality. He invites participants to the second international Global Future 2045 congress (June 2013)  http://www.GF2045.com.

“We’ll be routinely able to change our bodies very quickly, as well as our environments in virtual reality, but it will feel very real. We’ll ultimately be able to do that with real reality too, like self-organizing swarms of nanobots that can link themselves up into a virtual body.” says Ray Kurzweil.

For more information about the GF2045 congress, please visit http://www.GF2045.com

Brendan D. Murphy, Guest Waking Times Today Science is up on a pedestal. A new god has appeared; his high priests conduct the rituals,...