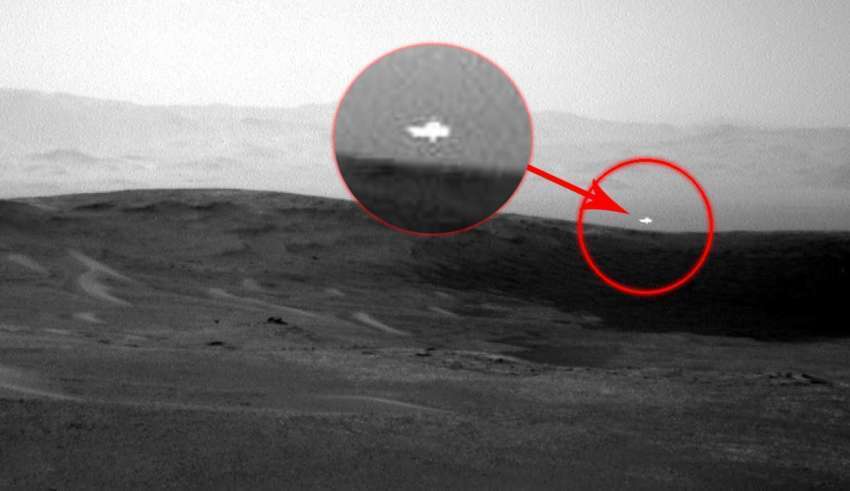 In 2017, former CIA retired agent Robert David Steele made a strange accusation on the American radio show “Infowars” , presented by the controversial conspiracy theorist Alex Jones. Steele revealed that the colonization of Mars actually began two decades ago when NASA sent people to the red planet against their will. But most disturbing of all was that the former agent said that the US space agency kidnapped children to be used as slaves in a Martian colony. Apparently 90 percent of NASA missions are secret and even engineers do not know most of these.

Steele also explained that in many of the images of the red planet can be seen mechanical remains of the Martian colonies, however, when this happens disconnect the probes or rovers to not reveal more evidence. But what most caught the attention is that NASA categorically denied Steele’s claims, ensuring that there are no humans on Mars and the only thing that is active are the rovers. But maybe Steele is right after all. A recent photograph taken by NASA’s Curiosity rover on Mars shows a mysterious glow on a Martian mount.

The mysterious light of Mars

The black and white image shows the desert landscape with high rocky mountains. In front of the larger formations, you can see a small white light elongated. NASA has previously admitted that they have detected similar anomalies in the images sent by the Curiosity rover. This question was taken on June 16 , and although everything seems to indicate that it is extraterrestrial evidence on the red planet, the experts in the matter have another completely different explanation.

For them, it is most likely a cosmic ray, some type of camera lens flare or sunlight reflecting off the rocks. The Curiosity rover landed on the surface of Mars in 2012, and is prepared with 17 cameras. Since then, it has moved around the globe, transmitting huge amounts of data along with large numbers of photographs. Many other images also show similar anomalies.

The rover has two “navigation cameras” that act as “your eyes” . The black and white images are in panoramic 3D and each one has a 45 degree field of view, which gives the ground control center a detailed view of the planet’s terrain. The controversial image was taken by the right camera. Coincidentally, the camera on the left was not focused in the same direction , and the photos of the same group and the same time show that he turned down to take a kind of selfie, showing parts of the rover on rocks and dust on the ground.

The appearance and disappearance of unidentified white light seems to have been rapid , since the photos taken immediately before and after do not show the same phenomenon. In 2014 another similar image also became a controversial motif. But quickly NASA explained that the bright spot was a well-placed flash of reflected sunlight, or a light shining through the housing of Curiosity’s camera. The bright spot appeared in two photos taken on two different days by the right navigation camera of the Curiosity.

“In the two images of the right eye, the point is in different locations of the frame of the image and, in both cases, at the level of the ground surface facing a crater rim on the horizon,” said Justin Maki, responsible of the cameras of the Curiosity rover at NASA’s Jet Propulsion Laboratory. “One possibility is that the light is the brightness of the surface of a rock that reflects the sun. When these images were taken every day, the sun was in the same direction as the bright point, west-northwest of the rover, and relatively low in the sky. “

But for the recent image, NASA has not yet offered its theory, although it is more likely that it will maintain the position of the similar phenomenon in 2014. But this will not prevent it from being speculated with other types of possibilities. In addition, there is the strange coincidence that the other camera was focusing in another direction just at the moment when the mysterious luminous phenomenon appears.

This brings us to the following question: Is it a clear and irrefutable evidence of extraterrestrial structures ? The conspiracy theorists are quite sure that the bright light is a reflection of some kind of artificial formations in the Martian mountain . Now, it may be an extraterrestrial origin, but it may also be that they are human Martian colonies, as former CIA agent Robert David Steele said.

To this we should add those photos that seem to show objects similar to those on Earth, such as the metal sheet with a perfect circle . But we should not rule out the possibility that NASA’s Mars images really correspond to Devon Island, in Nunavut, Canada , so it would all be a great conspiracy. Who knows.

What do you think about the mysterious bright light of Mars? Natural phenomena or are they structures of terrestrial or extraterrestrial origin?

In this article:Mars light, Martian colonies