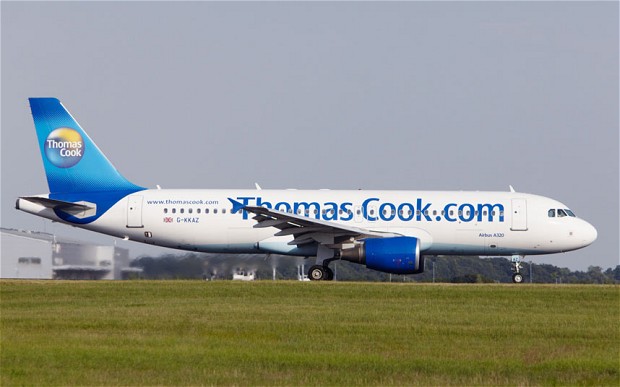 Any pilot flying holidaymakers between Manchester and Ibiza must be prepared for outlandish sights.

But perhaps nothing so apparently unworldly as this.

The captain of a Thomas Cook airliner flying tourists back from the Spanish holiday island to the north of England reported a “near miss” with a “rugby ball”-shaped UFO, which passed within feet of his jet.

The encounter, over Reading, Berks, was reported to the aviation authorities, who launched an investigation. But no earthly identity for the object could be established.

The encounter was disclosed earlier this month by the Telegraph, following the publication of a report into the inquiry. The document did not identify the aircraft involved.

However, following an analysis of flight data recorded on the internet, the Telegraph has established it was a Thomas Cook plane, with the flight number TCX24HX. It was an A320, with the registration G-KKAZ, which was made in 2003.

The jet was flying to Manchester International airport, from Ibiza, on July 19th 2013. For years, the island has enjoyed a hedonistic reputation, attracting thousands of tourists each summer, many attracted to its vibrant nightlife. In recent years, it has attracted an increasingly upmarket clientele, among them David and Samantha Cameron.

The encounter occurred in daylight, at around 6.35pm. It only emerged following publication of the report, which concluded it was “not possible to trace the object or determine the likely cause of the sighting”.

The captain said he spotted the object travelling towards the jet out of a left hand side, cockpit window, apparently heading directly for it. He said there was no time to for the aircrew to take evasive action.

He told investigators he was certain the object was going to crash into his aircraft and ducked as it headed towards him.

The incident was investigated by the UK Airprox Board, which studies “near misses” involving aircraft in British airspace.

The report states: “(The captain) was under the apprehension that they were on collision course with no time to react. His immediate reaction was to duck to the right and reach over to alert the FO (First Officer); there was no time to talk to alert him.”

It adds: “The Captain was fully expecting to experience some kind of impact with a conflicting aircraft.”

He told investigators he believes the object passes “within a few feet” above the jet.

He described it as being “cigar/rugby ball like” in shape, bright silver and apparently “metallic” in construction.

Once it had passed, the captain checked the aircraft’s instruments and contacted air traffic controllers to report the incident. However, there was no sign of the mystery craft.

As part of the inquiry, data recordings were checked to establish what other aircraft were in the area at the time. However, all were eliminated. The investigation also ruled out meteorological balloons, after checking none were released in the vicinity. Toy balloons were also discounted, as they are not large enough to reach such heights. Military radar operators were contacted but were unable to trace the reported object.

A spokesman for Thomas Cook Airlines said, “All our pilots are trained and required to report any unexpected events that occur during the flight to the aviation authorities.”

The Ministry of Defence closed its UFO desk in December 2009, along with its hotline for reporting such sightings. Following that change, the Civil Aviation Authority took the decision that it would continue to look into such reports, from aircrew and air traffic controllers, because they could have implications for “flight safety”.

In 2012, the head of the National Air Traffic Control Services admitted staff detected around one unexplained flying object every month.