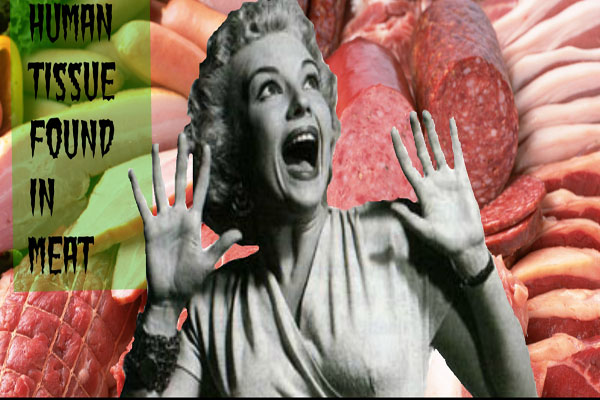 The horse meat fiasco in Europe has prodded scientists to look a bit deeper into what else we might be consuming. A team of South African scientists have just found traces of human tissue in meat meant for public consumption from 9 provinces.

The issue was revealed to parliament, almost as a side note, during meat inspection briefings on Tuesday.

A University of Stellenbosch scientist and his team conducted a microbial analysis that revealed traces of human elements, but said that slaughterhouse workers sometimes cut themselves . . . or other things . . . which could lead to the findings.

If I walked into a factory and the sample I randomly selected to test was a meat sample of which the person de-boning the meat had just picked his nose and then touched the meat, I would get a totally different microbial reading,” he said.

Delicious. Beyond the findings themselves, it brings up the global hot-button topic of the moment: food labeling. How much should we know about what we are consuming?

In addition to the troubling statements above, scientist Louw Hoffman noted that only 15% of the meat being sold in South Africa is correctly labeled, revealing other potentially harmful attributes of which consumers are currently unaware:

“In the labelling regulations it clearly states that allergens have to be mentioned and noted,” said Hoffman.

Yet, Hoffman and his team of scientists concluded that the incorrect labeling poses “no threat” to the consumers who eat it, despite some more gems uncovered:

Briefing parliament’s portfolio committee on agriculture, forestry and fisheries, University of Western Cape forensic scientist Dr Eugenia D’Amato said nearly 43% of samples she had tested which were labelled as game, were, in fact, beef.

D’Amato said horse meat had also been used as a substitute for springbok in biltong, and pork was found in ostrich sausages.

There was also a smaller proportion of kangaroo in samples.

Despite the overall findings that consumers have absolutely no idea what they are eating – including human remnants – in 85% of the products, SA’s Department of Agriculture, Forestry and Fisheries deputy director-general downplayed it by asserting that we are not becoming unwitting cannibals:

It is possible that (if tested) we could find traces of human DNA in meat. However, even if we do find human DNA, it does not mean we are eating human flesh.

Great. Unfortunately, we are evidently eliminating healthy microorganisms in the processing of foods, but since there is an acceptable standard of nasty foreign entities, thanks to our regulatory agencies – we have introduced a variety of contaminants into now weakened guts and immune systems.

We’d like to think that these food scandals are safe from us – overseas, it’s their problem. But, big problems are usually systemic and many of the developed nations are on the same platform. As with most food scandals, they go on for years unnoticed before the beans are spilled.

It doesn’t sound like anyone’s literally being run through the meat grinder just yet, but it’s a startling fact that we don’t know much about what our food comes into contact with. And we have scientists and regulatory agencies continually asserting how safe our food supply is.

Are you unsettled at the prospect of ingesting someone else’s particles and blood? Do you wonder what else will be found when the next scientific investigation is conducted in your country?

Perhaps we should be asking ourselves before each meal, “Hey, who’s in there? How’d they get in there? Anyone missing?”

In this article:DNA, Food, human tissue, meat, University of Stellenbosch