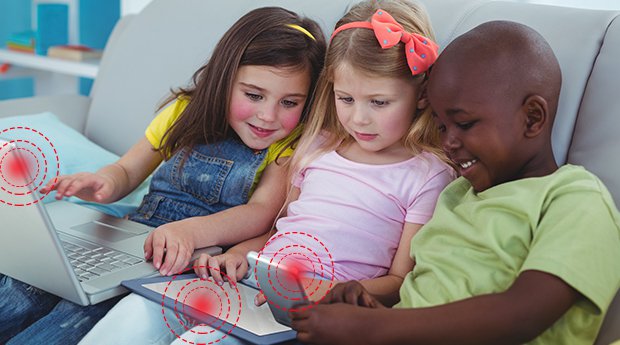 There are multiple concerns regarding electromagnetic radiation. This type of radiation was non-existent on Earth for a long time, and within the past few years, wireless radiation and wireless technology, in general, is taking huge leaps, a great example is the 5 G wireless rollout that’s taking place across North America right now. It’s funny because multiple researchers from around the world have been raising their concerns for years, which is exactly why many countries across Europe are completely banning wireless signals in schools and within nursing homes. Take France for example, they passed a law in 2015 banning WiFi from all nursery schools. The French National Library and many others in Paris, along with several universities, have completely removed all Wi-Fi networks, and it’s also banned in many municipal buildings. In addition to that, the law states that Wi-Fi must be turned off in all elementary schools when it’s not in use. A wired connection, if possible, is preferred.  In fact, there are thousands of published peer-reviewed studies that the communications industry continues to ignore. It’s one of many great examples of industry influence dominates government policy and science, one of many forms of scientific fraud that we see today.

You can access hundreds of these scientific papers and read more HERE, just click on the science section and under each heading, there are links directly to the research. If you click on the drop-down tab, a list of scientific references as documentation appears.

This article, in particular, will focus on our sleep, and how EMF’s could be affecting it. That being said, it’s important to mention that the science in this area is quite robust, and it shows a lot of adverse effects as a result of exposure to EMF’s, even ones that are far below current industry safety standards.

There are many experts in the field, and one of them is Dr. Russell Reiter, who also suggests, based on his research, that the suppression of melatonin by magnetic fields could result in a higher incidence of cancer in any tissue, and could certainly contribute to cancer, or predispose out to multiple neurodegenerative disorders as well, like cancer.

He further states that EMFs do decrease serum melatonin as well as light at night. I had a fascinating conversation with Dr. Reiter when we were both lecturing at a medical conference in Mexico city. Dr. Reiter insists that all other lights inhibit melatonin production. Dr. Howard W. Fisher, in an article written for www.eternitywatchmagazine.com.

Why does the industry continue to ignore all of the science that’s been emerging for decades? What is going on here? According to the appeal sent to Antonio Guterres, Secretary-General of the United Nations from numerous scientists:

Numerous scientific publications have found that EMF affects living organisms at levels far below international exposure guidelines adopted by most industrialized nations. There is discrepancy in how this matter is considered at the WHO, however. While WHO accepted its International Agency for Research on Cancer (IARC)’s recommendation that classifies both ELF/EMF and RF/EMF as Group 2B “Possible Carcinogens,” it also, in direct contrast to these warnings, recommends the adoption of the International Commission on Non-Ionizing Radiation Protection’s (ICNIRP) guidelines for exposure standards. These guidelines, developed by a self-selected 2 independent industry group, have long been criticized as not protective given the science now established.

Apart from the link posted near the beginning of this article, which will take you to a lot of science, much of it is linked within multiple articles we’ve written on this subject, you can refer to those below:

Are EMFs Affecting Your Sleep?

Researchers have demonstrated that electric fields and ELFs (extremely low-frequency magnetic fields) as well as static mangetic fields depress melatonin secretion. One of the foremost EMF researchers in the world, Juutilainene (2006), from the University of Kuopio, Finald, conducted a meta-analysis from in vitro animal studies and found that magnetic fields do react with the physical biochemistry of the body and other chemical and physical exposures – Dr, Howward W. Fisher,

The science also shows that EMFs can cause central nervous system, blood chemistry, and cardiovascular system damage. This is what the clinical findings from prolonged EMF exposure are indicating, based on thousands of studies. Again, links to science are provided above.

Research has also shown that damage to the pineal gland, adrenal gland, and thyroid gland.  Research has shown that low levels of microwave exposure can reduce melatonin. Melatonin is not just critical to maintaining our sleep rhythm but it’s also an antioxidant that helps to repair damaged DNA and reduces the growth of cancer cells. Additionally, research shows thyroid hormone levels can be impacted by wireless radiation. It has been established that even a small change in thyroid hormones can alter the brain.

Prominent Russian researchers, professor Valentina Nikitina, author of Occupational and Population Health Riss of Radio Frequency Electromagnetic Fields, has indicated that the “Prolonged EMF exposure looks like premature ageing and we all realize that people who do not sleep will appear older.

A disservice has been done in inaccurately depicting the body of science, which actually indicates that there are biological effects from the radiation emitted by wireless devices, including damage to DNA, and evidence for increased risk of cancer and other substantial health consequences…The public the world over has been misled by this reporting.— Dr. Ronald B. Herberman

Below is a “hexagonal grid of cellular base-station sites’ that cover the city of Chicago by Artist Nickolay Lamm . Also known as cell phone towers, base stations sit at the corner of every “cell” in Chicago’s large network. The picture also reveals antenna signals extending beyond the original cells that provide coverage over a large part of Lake Michigan. There are many things you can do to protect yourself. You could have a wired connection, you could unplug in the evening, you could look into crystals and stones like Shungite, or technologies that may mitigate these effects.

I’ll leave you with this informative lecture from Dr. Canna -Michaeldou from the 2017 Expert Forum on Wireless and Health