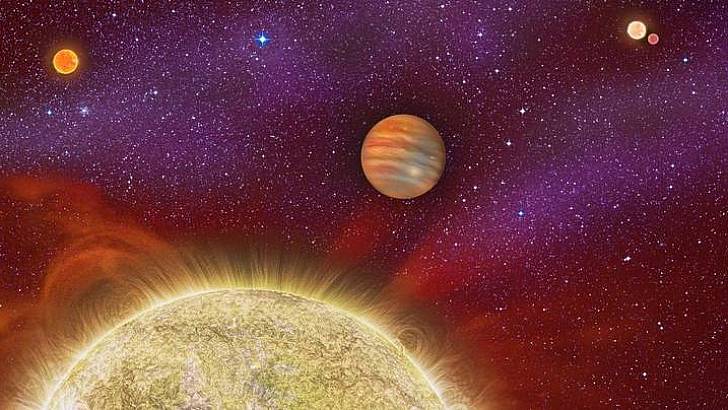 Germs stuck to the outside of the International Space Station are not from around here, cosmonaut Anton Shkaplerov said in an interview last week with Russian state-owned news service Tass. Microbes “have come from outer space and settled along the external surface,” Shkaplerov said. “They are being studied so far, and it seems that they pose no danger.” Russia’s space agency, Roscosmos, has not weighed in on this extraordinary claim.

The odds are not on the side of aliens. If microorganisms are tucked away within the space station hull’s crannies, as Shkaplerov says, they probably hitchhiked the 250 miles from our planet’s surface.


But imagine if scientists found alien microbes. How would humanity react to the news?

Michael Varnum, a psychologist at Arizona State University and a member of its new Interplanetary Initiative, is trying to anticipate this response. “One of the initial questions [of the initiative] that we’re curious about is how might we respond if we discover evidence of extraterrestrial life,” he said.


The moment when humans meet E.T. is a staple of fiction and speculation, as well as armchair science and conspiracy on YouTube. No one has predicted the psychological reactions to extraterrestrial microorganisms in a “systematic, careful way,” Varnum said.

Varnum teamed up with planetary scientists and conducted three experiments. The study, published online in November on a preprint server, is still under review, Varnum said. Two psychologists not involved with this research told The Washington Post that the study’s methods were robust.

The psychologist and his co-authors “make a critical distinction between reactions to the discovery of extraterrestrial intelligence and finding evidence for microbial life beyond Earth,” said Douglas Vakoch, president of the nonprofit group Messaging Extraterrestrial Intelligence, who was not part of the study. This work is unusual, he said, as studies past have focused on intelligent life.

In the first experiment in the study, Varnum and his co-authors analyzed how the media covers extraterrestrial discoveries. They looked at five events: the discovery of pulsars in 1967, which were not immediately recognized as natural; Ohio astronomer Jerry Ehman’s detection of the “Wow!” radio signal in 1977 (the signal’s source remains disputed); the 1996 announcement of fossilized microbes in a Martian meteorite; the strange behavior of Tabby’s Star reported in 2015; and 2017’s discoveries of exoplanets that exist within distant habitable zones.

The psychologists fed 15 articles — by the New York Times, Wall Street Journal, The Post and others — through a program that analyzes written content for positive or negative words. Journalists described these events using words with “positive affect” significantly more frequently.

“The reaction seemed to be much more positive than negative,” Varnum said.

Gordon Pennycook, a Yale University psychologist who studies beliefs about religion, health and fake news, said the technique was solid but argued that the results were not particularly illuminating. “I’m not sure that the language analysis reveals anything special,” Pennycook said, because “there is some evidence people do use more positive than negative words generally.”

The researchers also paid online participants to respond to announcements about extraterrestrial microbes. The scientists asked 500 people to describe their reactions to a hypothetical discovery of alien microorganisms. Respondents also had to predict how humanity at large would react. Like the journalists, people in the study used positive words. There were no characteristics that set responses apart, not a person’s income, ethnicity, political orientation or traits such as neuroticism or agreeableness. But people felt that the rest of the country would be generally less agreeable.

That may be because “most Americans tend to think, on any desirable trait or ability, that they’re better than the average person,” Varnum said.

In a follow-up poll, the researchers presented more than 250 people with a 1996 New York Times article, stripped of its date, reporting evidence of fossilized nanobacteria in a Martian meteorite.

The meteorite was a piece of Mars that had been knocked off its home planet and landed in Antarctica. Researchers reported in the journal Science that they found complex organic molecules in the meteorite and impressions of what they thought looked like tiny cells, among other potential signs of fossilized Martian life. The claim was so explosive that President Bill Clinton issued a statement, saying, “Like all discoveries, this one will and should continue to be reviewed, examined and scrutinized.” Over years of scrutiny, the claim of fossils in the Mars meteorite was dismissed. The consensus now is that the suggested signs of life were simply natural mineral deposits. The participants in the new study weren’t told that, however.

As a control, another group of participants read a New York Times articleabout the creation of synthetic life in geneticist Craig Venter’s lab in 2010. Venter and his team created a bacterial genome from scratch and popped it into a cell membrane, essentially forming a new organism.

Participants in both groups described their reactions positively, though the “positivity bias”  — the proportion of pleasant to unpleasant words — was stronger regarding the fossils.

Given these results, Pennycook said he would be “pretty confident” that, if NASA announced the discovery of alien microbes tomorrow, Americans would react positively.

“Results of this new study mirror a survey conducted by theologian Ted Peters, who explored the impact of discovering extraterrestrial life on a person’s religious beliefs,” Vakoch said. Most people responded that their own religious beliefs could withstand the announcement — but other believers would struggle. “It looks like we don’t need to be worried about others not being able to handle an announcement of extraterrestrial life,” he said. “They’ll do just fine.”

Planetary scientist Lindy Elkins-Tanton, who is the director of Arizona State University’s initiative but was not directly involved with this study, said that “getting ready for what we might find” in space is the first step. That Americans respond positively, she said, is “quite hopeful.”

Varnum cautioned that these results do not reflect how the rest of the world might respond. Vakoch echoed that sentiment. Past research on extraterrestrial civilizations suggest that Americans tended to view aliens in a more black-and-white way than residents of China, for instance, he said. “Chinese participants were able to imagine contact would lead to both risks and benefits,” whereas Americans either thought the discovery would be “all good or all bad, but not both,” he said.

It is also critical to acquaint people with ambiguity, Elkins-Tanton said. She cited the long debate around the Martian meteorite. Even in the event that a retrieval mission to Mars obtained a sample and brought it to a lab, and observers witnessed the organism reproducing, consensus would not be sudden, given the possibility of Earth contamination. Under what scenario, would the scientific community be most swiftly convinced? “Unless we go to Europa and find a giant skeleton,” Elkins-Tanton said. “Really, it’s not going to happen.”

Teeny E.T. is not such a far-out idea. For 2.9 billion years, all life on Earth was microscopic. If evolution works the same way elsewhere in the universe, the average alien will be smaller than a little green man. Much smaller.

Vakoch was not so quick to relinquish the radio telescope to the microscope when it comes to searching for aliens.

“While it’s no doubt true that there are more planets in the galaxy with microbial life than with intelligent life, that doesn’t mean we’ll detect ‘bacteria’ beyond Earth before we pick up a radio signal,” Vakoch said. He predicted that, as long as the money doesn’t dry up, surveyors will listen to a million stars in the next decade, looking for noisy extraterrestrials.