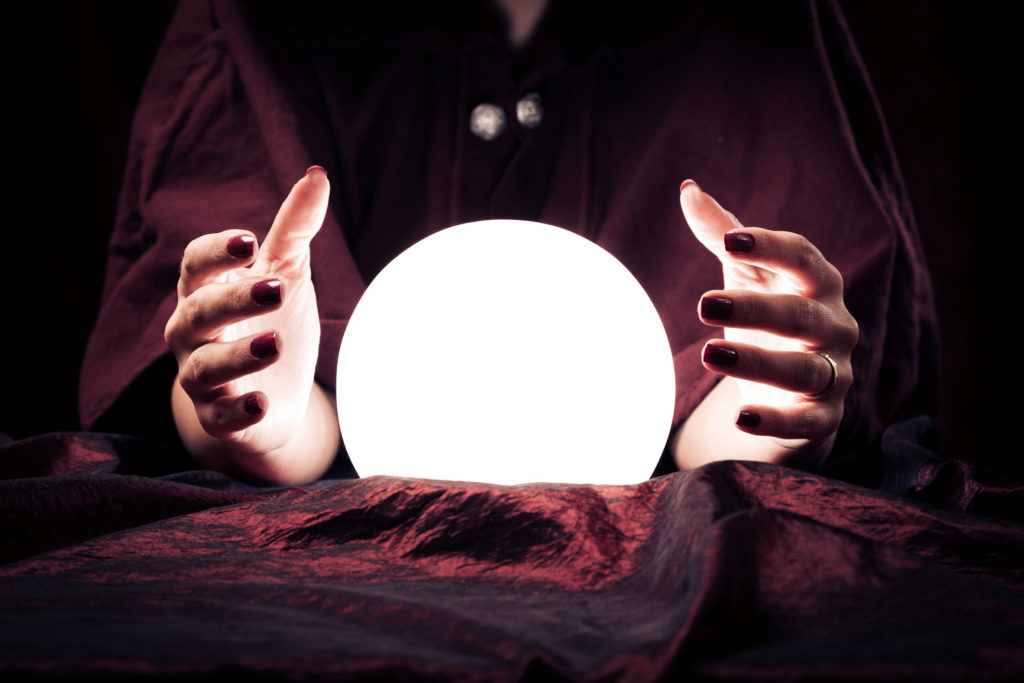 Crystal balls were once, years ago, much more common in occultist practices than they are today. The typical type of crystal ball is a very large, thick, heavy solid glass sphere that would be set upon an extremely dark; a blackish huge square-cut piece of wool, cloth, or satin. A person would stare intently into the circular glass and concentrate on seeing visions of the future, or even conjure spells.

Divination using a crystal ball or other light reflective object or surface, even upon water, is known as scrying. When scrying is practiced with crystals or any transparent body, it is known as crystallomancy or crystal gazing. The crystal ball is said to become misty before the future scene is visually displayed. A crystal ball is also known as an orbuculum or a crystal sphere.

Some people, over a century ago, would stare in the crystal ball on a bright, sunny day; but actually doing so is harmful. A large crystal ball reflects the sunlight to such a high degree that the sunlight hurts and damages the eyes and hands if held, and may burn the cloth or such material around it. So that activity soon becomes terminated.

The established method is to use at the crystal ball at night; in the darkness or a dimly lit room for scrying.  Many people have tried to see the future in a crystal ball only to see nothing paranormal and have turned skeptical and disappointed.  Other people, when trying to see the future while crystal gazing, soon get nervous and frightened; feeling they should not try to see future events in case some type of horrible tragedy and even death reveals itself.

Their fear can be based on a terrible incident to occur that these people feel as though they cannot stop it. Thus, with these individuals, their minds have produced a blocking effect to see ahead in time which neutralizes any type of psychic precognition ability they might really have.

Nowadays, many people who continue to look toward crystal ball precognition desire their crystal balls to be bit mere glass that has a small amount of mineral, such as lead, in it, but an actual crystal ball made from quartz crystal. Lead can be added to originary glass and the higher content of lead is also known as “crystal” and is common in antique glasses, dishes, candlestick holders, etc. Lead in glassware results in a smoother, more lustrous finish.

Quartz crystal balls are on today’s occult supplies market but are very expensive. Quartz is known to have a certain amount of stored electricity inside of it. If two pieces of dry quartz are rubbed together, flashes of light are seen because of electrical discharge. This phenomenon is called triboluminescence, or also called “cold light” because no heat is produced. The flashes of light are best seen in the dark.

An American Indian tribe, the Uncompahgre Ute, would fill a translucent rattle, made of rawhide, with bits of quartz. When the rattle is shaken, the quartz particles would glow.  Other divination balls have been made using amethyst: a precious stone consisting of mainly a violet or purple variety of quartz.

The violet; purple quartz variety, in Europe, since ancient times has been considered a special stone with virtues associated with royalty and was used to decorate English regalia. Some forms of quartz derived amethyst are red to vanter lilac hue. Amethyst is the birthstone for folks born in the month of February.

Native American Indians in such states, as well as other warm-weather places, were very fond of creating jewelry, arrowheads, spears, and knives from black obsidian. A common misconception is that obsidian is a mineral, but it is not, due to the lack of a crystalline structure obsidian is sometimes described as a mineraloid. Some feel what obsidum lacks in structure it makes up for in sheer beauty and origin making the substance a valuable addition for the physic.

One of the uses of the natural black glass was to polish it to create early mirrors. Ancient peoples who did not understand the properties of light reflection thought these black mirrors were magical. A black obsidian so called crystal ball is of course not made from real crystal and makes it a glass ball for divination.

Beware of occult suppliers who claim to sell crystal balls claimed to be quartz, amethyst, or black obsidian but are really just colored glass. The most common kind of glass is soda lime or plate glass, which is most often clear. This type of glass is often found in your home and is used to make windows. If you go to a hardware store you can look at its edge which has a greenish hue. This cast, however, is more difficult to see once it is made into a crystal ball unless there is a flat spot for it to rest on, crystal balls have no edges!

To tell quartz from glass: with quartz, there is usually no additional tinted colors when staring through it. Glass, however, you can see a green tint when looking through it in strong light near the perimeter of the glass. Crystal will often show lines or cracks where glass has a tendency not to. Also, check for air bubbles which generally mean the object is glass. In any case, you may need to use a jeweler’s 10x magnifying loupe to look for any of this.

Lastly, a very interesting method to create a crystal ball is possible using ordinary ice. The method suggests a balloon is filled with water and placed into a freezer for several days. The shape should take on that roughly of a sphere. After the ballon solidifies, simply cut the neck end off with a pair of scissors and peel away the rubber. Ice can successfully be used as crystal balls. Some clairvoyants prefer to have a clear type while others prefer to use cloudy ones. There are ways to make ice clear for scrying attempts.