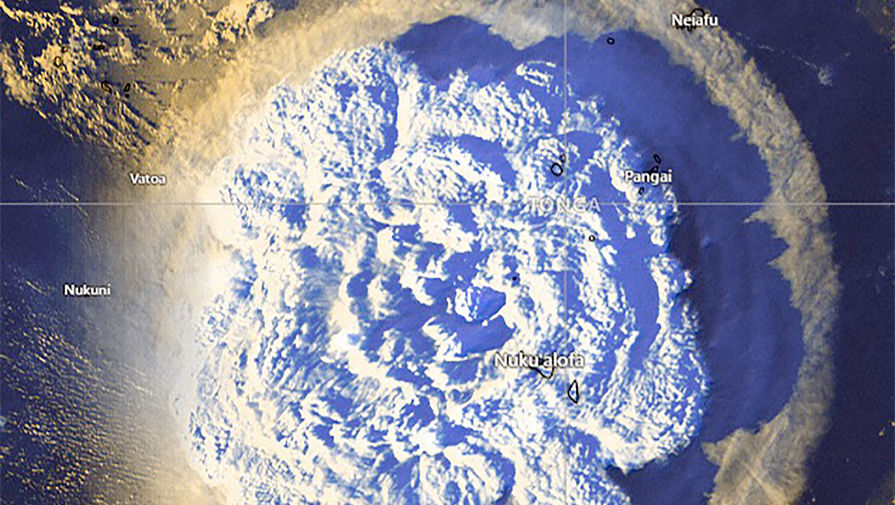 The underwater eruption of Hunga Tonga-Hunga Ha’apai, which was 600 times stronger than that of the atomic bomb that wiped out the Japanese city of Hiroshima, flattened entire areas, with the acoustic wave reaching as far as Alaska and the ash cloud to Europe, raised enormous concerns. What is the common “link” that connects Tonga with the Greek island of Santorini?

In order to assess how serious the threat from the eruption of the submarine volcano in the Tonga Islands is to the planet and to humanity, scientists resort to comparisons and applied a scale that is also used to assess the explosive power of nuclear weapons They concluded that the volcanic eruption in Tonga corresponds to the power of approximately 667 atomic bombs dropped by an American bomber on the Japanese city of Hiroshima in August 1945.

In terms of impact, the January 14 eruption was one of the most deafening on record in at least the last 100 years – or since 1883, when the Krakatoa volcano erupted in Indonesia.

At the time, however, the disaster was of biblical proportions, with tens of thousands dead, with hundreds of towns and villages being razed to the ground by the tsunami that rose from the explosion. As for the island of Krakatoa, a very large part of its surface, about 2/3, was detached and precipitated into the sea. When comparing proportions, the energy of the explosion at Krakoa was, according to subsequent calculations, equivalent to 200 million tons of TNT-type explosive. To make it even easier to understand what this colossal amount of explosives means, data from Beirut is used.

In August 2020, when the port and much of the city were leveled by the ignition of poorly stored flammable materials, the energy was equivalent to just 400 tonnes of TNT. This means that what happened in Krakatoa was half a million times more powerful than the hell unleashed in Beirut. The Tonga event, although not very deadly – 5 people were killed and so many others injured – is further compared to that of Pinatubo (Philippines, 1991) as with almost all previous volcanic eruptions, literally from around the world.

In this way, volcanologists create a chain of events, one might say a series of “chain eruptions”, connecting today with the distant past, Tonga with Krakatoa and then with Pinatubo, with Mount Helen and Yellowstone in the USA, even with Santorini in 1613 BC, a volcanic eruption 100 times more catastrophic than that of Tonga.

Going even further, experts claim that a major volcanic event such as that of Tonga may be the key to revealing the secrets of other planets in the Solar System, such as Venus and Mars.

James Garvin, a senior NASA official, identified the energy released during the Tonga explosion as about 10 megatons of TNT. The sound wave reached Alaska, almost 10,000 km away, while the ash cloud traveled to Europe.

In the kingdom of the Tonga Islands, apart from the almost complete destruction of the island of Hunga Tonga Ha’apai, everything was hidden under an ash cover, up to 2 cm thick. The type and severity of the damage that ash can cause to agricultural crops, flora, fauna and humans are still unknown. Experts are currently analyzing the composition of the ash, as the material ejected during the eruption is different, depending on the volcano.

What is certain in the case of Tonga is that sulfur dioxide, which flooded the atmosphere, can cause damage to the human lungs. This element, however, despite its harmful effect on humans if inhaled, can change the atmosphere on a universal scale in a beneficial way, albeit temporary. This is because it has the ability to reduce temperatures and therefore to mask climate change. In this sense, however, while the explosion in Tonga is the strongest and most dangerous recorded since Pinatumbo in 1991, it was relatively powerless to cause a significant change in temperature.

The ash cloud rose up to 30 km above the Earth’s surface and its sulfur dioxide content was estimated at 0.4 Tg (tegrams, ie 1,012 g). This quantity is proportionally minimal in relation to that of Pinatumbo, which had charged the stratosphere with millions of tons or a total of 20 Tg of sulfur dioxide. This resulted in the Earth’s atmosphere cooling by 0.6 degrees Celsius over a three-year period after the explosion. The ash cloud was so dense and so extensive that it shaded the sun, repelled its radiation, and returned it to space. At the same time, because the cloud contains carbon dioxide, it exacerbates the greenhouse effect and accelerates chemical reactions that break down the ozone layer.

However, the side effects of such a powerful eruption are spreading throughout the natural ecosystem, which is why Pinatumbo is credited with unusual phenomena, such as the sudden increase in the bear population, a mysterious epidemic that wiped out corals in the Red Sea, floods in the riparian areas of the Mississippi River in the USA, the terrible drought in various parts of Africa etc. The fact that similar effects on the environment are not expected due to the latest eruption is due to the alarming difference between Pinatubo and Tonga, which is located during the volcanic eruption.

In the Philippines, in 1991, the explosions continued for hours, while in Tonga the crisis ended in less than 60 minutes. Nevertheless, the explosion in the southern Pacific a few days ago is of great concern to experts. On the one hand, gas masses that sprang from the sea caused an inexplicable, unprecedented circular ripple in the atmosphere, in the shape of concentric circles that form when a rock falls into a lake – but of course on a huge scale, symmetrical turbulences spread over an area of more than 16,000 km – and on the other hand such a large tsunami, with waves that exceeded a height of 15 meters reached the shores of Peru, Chile and even Russia, it seems incongruous with the intensity of the explosion in Tonga.

The “key” in the Cyclades

Volcanologists believe that most of the seismic activity on the planet takes place at the bottom of the sea. Respectively, however, is the perception of scientists that human knowledge, while it has made brilliant conquests in space, proves incapable of deciphering the riddles of the oceans. That’s why, after all, even the number of underwater volcanoes remains unknown. Some experts talk about tens and others about hundreds of thousands of volcanoes – active and not – in the erebous depths of the sea, these secret places of the planet where access is possible only with remote-controlled robotic submarines.

In 2019, a multinational mission of 30 scientists funded by NASA, tested an advanced type of robotic seabed explorer. The team focused on the underwater volcano on the tiny island of Columbus, 6.5 km northeast of Santorini, which had erupted in the past with devastating consequences for the wider area of ​​the Eastern Mediterranean. Three autonomous robots were landed, one of which was in charge (hence the name “Admiral Kirk”), while the other two were subordinates of the leader – and one was named “Spock”, as the scientists drew inspiration from the legendary “Star Trek” science fiction series.

Thanks to their artificial intelligence, the deep sea engineers passed the test with great success, as they avoided deadly dangerous traps but also communicated with each other, warning each other of any dangers. At the same time, they sent to the operations center unique images from the state of the volcano, with columns or “chimneys” of fossilized magma that reach a height of up to 4 meters.

For NASA, Columbus is a groundbreaking study laboratory, both in terms of volcanic activity on Earth and in simulating conditions in other parts of the universe. Moreover, this submarine volcano is considered active, since there is a hydrothermal field that releases bubbling fluid matter, at temperatures above 220 degrees Celsius.

Another advantage of Columbus for scientists is that relatively recently it had given a very strong eruption, the only one in historical years from the volcanic area of ​​Santorini.

In particular, in September 1650, huge amounts of inorganic matter were released into the atmosphere that reached Asia Minor. Dozens of people and hundreds of animals were killed by the poisonous gases of Columbus. Reports of the time describe the sea to have been turned to land by the deposition of ash and pumice, while a tsunami had been created, with 10 m high waves.

Even this volcanic event, however, could not be compared with the eruption of the Santorini volcano, which dates back to the end of the Bronze Age. Then, at around 1600 BC, about 40 cubic kilometers of ash were released from the volcano of Santorini and a gray layer up to 30 cm thick covered everything, within a radius of several kilometers. Geologists speculate that the eruption may have caused the world to be colder, by at least 1-2 degrees Celsius.

The ash, as it was launched to the stratosphere, was transported to every corner of the globe, as evidenced by the fossils found in places extremely far from Santorini, such as Greenland, Asia, North America and others. And, of course, the tsunami that arose after the explosion is said to have completely destroyed the centers of the advanced Minoan civilization in Crete.

From the point of view of science, the study of Santorini leads to the decoding of one of the greatest mysteries of nature, the volcanoes. These are the most powerful means of mass destruction that can spring from the bowels of the Earth and are those that rank at the top of the volcanic eruption scale, with a VEI index = 8 (with Thira (Santorini) at 7).

The most recent eruption of this kind occurred 26,500 years ago in New Zealand, as volcanoes erupted millions of years ago. But because they were the ones who shaped the continents, the land and the oceans, in short the planet almost as we know it today, their study is crucial to tracing the human presence. In fact, in volcanoes such as Tonga, which add or subtract entire pieces from land and human habitation, the answer to the existential question of whether we are alone in the Universe may be hidden. 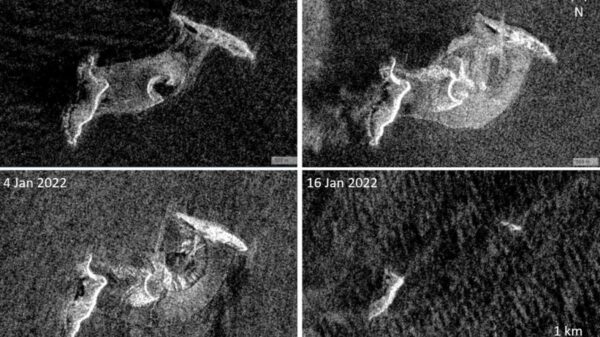 The Hunga-Tonga-Hunga-Ha’apai underwater volcano erupted on the 15th of January in the Pacific Ocean and from it, the Polynesian kingdom of Tonga announced a...