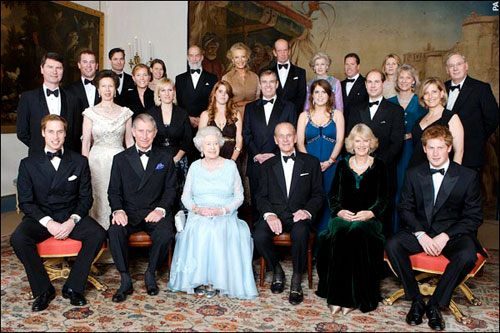 “Power does what it wants. […] Forget the politicians, they’re an irrelevancy. The politicians are put there to give you the idea that you have freedom of choice. You don’t. You have no choice. You have owners. They own you. They own everything.[…] they own this fucking place. It’s a big club, and you ain’t in it. You and I are not in ‘the big club.’”

The absurd suggestion that the UK’s un-democratically selected Royal Family are nothing more than decoration has come crashing down as a court order forced the establishment to reveal how things really work behind the scenes. Despite Royalists constantly pushing the myth their monarch performs a ‘ceremonial role’, the truth is very different. In fact the approval of, Her Majesty The Queen and His Royal Highness Prince Charles, has been required for at least 39 different bills suggested by elected members of Britain’s Houses of Parliament.

The extent of the Queen and Prince Charles’s secretive power of veto over new laws has been exposed after Downing Street lost its battle to keep information about its application secret.

Whitehall papers prepared by Cabinet Office lawyers show that overall at least 39 bills have been subject to the most senior royals’ little-known power to consent to or block new laws.

FULL STORY FROM THE GUARDIAN HERE.

There is a curious level of Orwellian doublethink in the UK when it comes to the Royal Family, I try to explain this further at the end of the article. Anti-monarchists often feel those who disagree with them are apparently hypnotised into ignoring the reality of their situation. I remember being dumb-struck by someone I was debating the issue with on a London radio station who, with apparent sincerity, announced that the Royals were “just a symbol, it doesn’t mean anything”. It was incredible to me then and it still is now: this person actually believed in, and was prepared to defend the concept of, a symbol that does not symbolise or mean anything.

“There has been an implication that these prerogative powers are quaint and sweet but actually there is real influence and real power, albeit unaccountable,” he said.

Andrew George, Liberal Democrat MP for St Ives, which includes land owned by the Duchy of Cornwall, said the findings showed the Royals “are playing an active role in the democratic process”.

He called for greater transparency in order to evaluate whether the powers were “appropriate.”

“This is opening the eyes of those who believe the Queen only has a ceremonial role,” he said.

“It shows the royals are playing an active role in the democratic process and we need greater transparency in parliament so we can be fully appraised of whether these powers of influence and veto are really appropriate. At any stage this issue could come up and surprise us and we could find parliament is less powerful than we thought it was.”

FULL STORY FROM THE TELEGRAPH HERE.

Currently the UK Government is pursuing a policy of cutting back state welfare benefits. I suggest they start with those given to the monarchy through another rarely discussed, and constantly downplayed, aspect of the monarchy: the civil list.

The frustrating thing about this debate though (from the perspective of someone who believes the monarchy is an un-democratic, un-fair, outdated, bulls–t embarrassment) is the fact that vested interests in the world of both the media (who want a Knighthood or MBE) and politics (same problem) work furiously behind the scenes to keep the truth about the UK’s entirely un-accountable heads of state secret:

The revelation comes after parliamentary lawyers were forced to release a document the government had fought to keep secret in an unsuccessful freedom of information battle.

That it is even allowed to be freely reported to Her Majesty’s subjects is unusual.

Again from The Guardian:

The Cabinet Office fought against the publication of the 30-page internal guidance in a 15-month freedom of information dispute. It refused a request to release the papers from Kirkhope, a notary public who wanted to use them in his graduate studies at Plymouth University.

An American friend of mine once asked: “but how do they get away with it?”.

In closing here are 5 key ways I believe the monarchy manages to hold its iron grip on the hearts and minds of their subjects in the United Kingdom. I fully expect and hope these ideas will be fleshed out and added to by Disinfo’s famously articulate comments section:

1, The power of association: “Queen and country”.

The power of association is widely known in advertising. Brands which have no direct link to something positive can benefit from an association to something the consumer loves or respects. The easiest way to do this is by simple repetition. The alliterative mantra “Queen and Country” makes people believe there is something intrinsically patriotic about blindly supporting them, rather than daring to imagine a nation which stand on its own two feet and looks after itself.

2, The science of behaviourism, “Come on stop being such a stick in the mud lets have a party!”

Behaviourism suggests that if you do something, no matter what your conscious mind believes, subconsciously you will agree with the ideas the action suggests. For example, people who spend time smiling for no reason tend to feel happier. The recent Royal jubilee and Royal wedding celebrations are good examples of this in action on a nationwide scale. Despite a great number of people not affirming a belief in the idea of a hereditary monarchy there were still a large number of well attended state sponsored parties to celebrate the Royals. Lots of friends of mine went along despite not being monarchists. Nationwide, inevitably approval ratings soared, and continue to rise. On a smaller scale, more than ever before these days, my anti-monarchist sentiments are being challenged and debated by people who previously might have agreed.

3, The power of a promise, “I promise to serve Her Majesty The Queen”

All of the top members of the establishment in the UK, sitting members of Parliament, Judges, Magistrates, Police Officers, Clergy, and the military, have to swear allegiance to the monarch in order to do their duties. These oaths are common in other parts of the UK as well. In a sense this is an extension of behaviourism and the affirmation is perhaps a form of mild self hypnosis.

4, They have the power to patronise you with an MBE, OBE or simply their association: “I could make things good for you and your family”.

I remember once being in the office of a major media organisation, framed above the desk of the boss was a letter from a senior member of The Royal Family thanking them for their help with some charity work. Then and there it dawned on me why criticism of The Royals is so rare in the “mainstream media”.

5, The power of celebrity: “Oh, it’s not fair is it, those horrible paparazzi”

To think that the Royals do not make arrangements with the press is as absurd as the now defunct notion that their role in law making is purely for fun and games. The level of access some photographers, even apparently rogue ones, get is staggering. This is one of the richest families in the world with one of the world’s biggest powers protecting them. Being famous celebrities brings a form of power that is easy to underestimate until you see it close up.

Advertisement. Scroll to continue reading.
In this article:Monarchy, Royalty, UK