Nazi Germany had to make a show of being anti-Masonic since its enemies were controlled by Freemasonry. Bernard Fay seized this brief moment to try to save his beloved France. 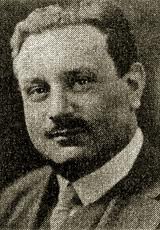 Harvard-educated historian, Bernard Fay, a member of the College de France and Director of the National Library, headed an investigative unit that rooted out Freemasons.

Working for Vichy President Philippe Petain and the Gestapo, Bernard Fay compiled a list of 170,000 Freemasons, of whom 989 were sent to concentration camps where 549 were shot. In addition, about 3000 lost their jobs. All Freemasons were required by law to declare themselves to authorities.

Fay also seized the secret archives from the Grand Orient in Paris and from Masonic lodges throughout the country. He compiled the information at the Biblioteque National and edited a monthly Journal, Les Documents Maconniques.

The lead articles had titles like “Freemasonry and the Corruption of Morals.” “Freemasonry Against the State,” and “The Masonic Lie.”

In 1943, Fay produced a film entitled Forces Occultes which depicted Masonic subversion world wide. The film recounts the life of a young Député (Congressman) who joins the Freemasons in order to relaunch his career. He thus learns of how Illuminati Jewish finance in England and the US used Freemasonry to involve France in a war against Germany. The Director Jean Mamy was executed as a collaborator in 1949.  Thanks to YouTube, the film with English subtitles can be seen online.

LIBERATIONOf course, after France was “liberated” by the Masonic powers in 1944, the tables were turned.Fay was arrested and sent to a concentration camp. When he finally came to trial in 1946, he was unrepentant and defiant.

“My great imprudence was to remain in France from 1940 to 1944, to dream of its regeneration, to consecrate all of my forces to it, to risk my life for it, and to believe in it, ” he said.

According to Barbara Will, author of Unlikely Collaboration, “perhaps the most striking aspect of his trial was the unwillingness of prosecutors to argue with Fay about the political opinions he still freely expressed.”

For example, he stated to the court that “for many years I have considered Masonry a dangerous institution, and on this point for some twenty years I have changed neither opinion nor language. The presence of the Germans had no effect on my ideas.” (p. 181)

It is a measure of the vice-like grip that Freemasonry has on the liberal mind that Barbara Will, an English professor at Dartmouth College, persists in describing Fay’s views as “paranoid” and “bilious.”

Fay had access to the secret archives of the Grand Orient. If he said they were dedicated to establishing a Luciferian world tyranny, he was anything but uninformed.

Fay didn’t have much faith in his trial. The judge, he noted, was an “Israelite and Freemason.” Surprisingly, he was not hanged. On Dec 6 1946, at the age of 54, he was sentenced to hard labor for life.

In 1951, while convalescing in a prison hospital, he managed to escape to Switzerland with the help of fellow anti-Masons. Two years later, he was pardoned by Charles de Gaulle. Nevertheless, he remained in Switzerland, where he continued to teach and write books until his death in 1978.

Our minds have been trained to shut down at the mention of God. However, the New World Order is ultimately an occult exercise designed to replace God (Reality) with Lucifer, who represents the Illuminati’s self serving rebellion.

This cult consists of Cabalist Jews and Freemasons who proclaim God has no form and is unknowable. They step into the breach and anoint themselves God.

They create a solipsistic man-made reality. This is why they must control the mass media and education. We are prisoners of this matrix. Modern (i.e. Masonic) culture is a fraud dedicated to undermining marriage and family (through gender bending and promiscuity), race, religion (God) and country. It is a dead-end.

In fact, mankind is connected to God by our soul (which the Illuminati deny exists.)  God has attributes which we all crave, spiritual absolutes such as Truth, Love, Goodness, Justice, Beauty and Harmony.

These attributes ultimately are Reality. That is why we we feel confused, listless and empty without them. The Illuminati is dedicated to turning Reality on its head, making what is healthy seem sick, good seem evil, true seem false; and vice-versa.

All true religions are based on this paradigm. That is why Freemasonry is dedicated to destroying them.

Bernard Fay belongs to the France of the ancien regime, the true France of Monarch, Church and army. This France was rotted out and destroyed by Illuminati Jewish finance and their Masonic lackeys who sponsored the French Revolution.

Modern history is an account of how power and wealth has been transferred from the church and aristocracy to Illuminati finance using liberal and democratic ideals as pretexts.

Nazi Germany had to make a show of being anti-Masonic since its enemies were controlled by Freemasonry.  Bernard Fay seized this brief moment to try to save his beloved France. Of course, this window closed quickly since the Nazis also were financed and controlled at the top by the Illuminati.

Modern history and culture is saturated by Masonic assumptions yet the cult is largely unknown and unmentioned. Masonic Illuminism is the (satanic) religion of mankind yet its name is never spoken.

I was channel surfing yesterday and landed on the program “Decoded.” A 33-degree Freemason in Washington DC was disavowing any Masonic plot for world domination. This is another case of “listen to what we say, not what your eyes tell you.”  Illuminati conspiracies always deny with their lips what they do with their hands.

If Freemasons don’t control the world, why do their symbols dominate Washington DC and other world capitals? Why are Barrack Obama and most of his GOP opponents Freemasons?

If they were dedicated to good (as they claim), the world would be a different place.

Our society continues to be dysfunctional, corrupt and scandal plagued. Yet it refuses to address the underlying cause: subversion and control by a pernicious satanic cult.