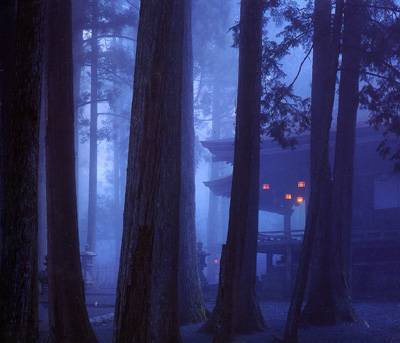 The Himuro Mansion (or Himikyru Mansion) is a japanese urban legend about the dark history of a haunted house and the horrible murders of an entire family who lived there. They say that the video game Fatal Frame was based on a true story. Eager to solve the mystery, many people have scoured maps, trying to find the real location of Himuro Mansion.

According to the legend, the Himuro Mansion is a large, traditional Japanese house that is located in a rocky area somewhere on the outskirts of Tokyo. The mansion became famous for being the site of the worst mass murder in the history of Japan.

These rituals were part of the Himuro family’s duty to keep the Hell Gate sealed. The family was able to do this for many years until Kirie’s ritual failed and caused The Calamity, killing most of the occupants of the mansion and unleashing the Malice, cursing the mansion and all who die within it. The Himuro Family Master then killed all those in the house who survived The Calamity before taking his own life.

The mansion was left abandoned for many years as strage things kept happening to those who came too close. Locals were fearful of it. The Himuro family were said to have practiced ancient and forgotten Shinto rituals that had long ago been outlawed in Japan. One of these occult rituals was called “The Strangling Ritual” and involved thesacrificial murder of a young girl. The purpose of this gruesome ritual was to protect the Himuro family from bad karma which they believed would emerge from a portal in the mansion’s courtyard.

The Strangling Ritual had to be performed every fifty years to prevent the bad karma from destroying the family. They would select a baby girl from within the family and raise her in secret. They called her “The Rope Shrine Maiden”. The girl had to be kept away from the rest of the world, in complete isolation, or else the ritual would not work.

When the time came for the ritual to be performed, they dragged her out to a shrine in the courtyard and tied ropes around her neck, her arms and her legs. Next, a team of oxen would pull the ropes in different directions, tearing the young girl’s body apart. The blood-stained ropes were then placed over a portal in the mansion’s courtyard, sealing the gateway. If the ritual was a success, it would keep the bad karma away for another half century until the ritual had to be repeated.

For generations, this tradition was passed down through the Himuro family. However, during the preparations for the last recorded ritual, something went wrong. The Rope Shrine Maiden fell in love with a young boy she saw from the window of the mansion. This was a disaster because she was supposed to remain pure and free from worldly influences. Her blood and spirit were tainted and when she was sacrificed, the ritual failed miserably because she was no longer pure.

Upon learning of the maiden’s love, the head of the Himuro family became distraught. He was responsible for the ensuring that the ritual was a success. Fearing that disaster would now befall the family, he went on an insane rampage throughout the mansion. He brutally murdered the entire Himuro family, hacking them to death with his traditional Japanese sword, the katana.

The head of the family believed that, by killing them, he was saving them from certain doom. When every person in the mansion lay dead, he fell upon his own katana, committing suicide.

The local people in the neighboring village kept quiet about the story of Himuro Mansion for decades. Ever since then, people have reported a variety of weird happenings or inexplicable phenomenon taking place on the property.

Bloody handprints and large red stains have been found splattered all over the walls inside. Ghostly apparitions have been seen both at night and in broad daylight. As legend would have it, these are the ghosts of the murdered family members. It is said that they will attempt to repeat the failed ritual using whoever is daring or foolhardy enough to enter the abandoned building.

People who enter the house are occasionally found dead, with rope marks on their arms and legs indicating that they had been bound and pulled. Others have been found torn to pieces in the underground network of tunnels that lie beneath the mansion. Nobody knows who made these tunnels or what purpose they served but stories suggest that they were involved in the Strangling Ritual.

There’s also a certain window in the house that has become infamous. They say that if you take a photo of this window, the ghostly image of a young girl in a kimono will appear in the developed photograph.These incidents have provoked fear in the people of Tokyo, and many believe that those who venture near this area will become cursed. The deaths of seven people on the property are unexplained to this day.

The urban legend of The Himuro Mansion became popular in the west when the Japanese video game, Fatal Frame, was released in English. Ghost stories about the haunted house blew into a worldwide craze. If the legends are true, the Himuro Mansion is definitely one of the most haunted houses in Japan.

The most popular version of the tale states that bad karma would emerge each December (other versions simply say “toward the end of the year”) from a portal on the Mansions grounds. In order to prevent this, a maiden was chosen at birth by the master of the household and isolated from the outside world in order to prevent her from developing any ties to the outside world, which would in turn, jeopardize the effect of the ritual.

On the day of the Strangling Ritual, the maiden was bound by ropes on her ankles, wrists, and neck. The ropes were attached to teams of oxen or horses to rip her limbs from her body, quartering her. The ropes used to bind her appendages would then be soaked in her blood and laid over the gateway of the portal. They believed that this would seal off the portal for another half century until the ritual had to be repeated.

During the last recorded Strangling Ritual it is said that the maiden had fallen in love with a man who tried to save her from the ritual. This “tie” to Earth tainted her blood and spirit and ruined the ritual altogether. Upon learning of the maidens love, the master took up his sword and brutally murdered all of his family members, before finally, in fear of what would soon happen, fell upon his own blade.

This is the basis of the “haunting” of the Himuro Mansion. Local legend has it that these souls of the murdered family wander the mansion attempting to repeat the failed ritual using whomever enters the abandoned building. Blood splashes on the walls are reportedly seen, as if they were flicked from the blade of a sword that had recently sliced through flesh. Many have reported seeing spirits and apparitions dressed completely in white, rinsing cloths and preparing the grounds for the ritual.

Interest in the Himuro Mansion has peaked due to it’s inclusion into the back story of the popular game, Fatal Frame. Here is a quote from Makoto Shibata, Chief Producer of Fatal Frame, regarding the legend:

“In an area outside Tokyo, there lies a mansion in which it’s said seven people were murdered in a grisly manner. On the same property, there lie three detached residences that surround the mansion, all of which are rumored to have ties to the mansion’s troubled past. It’s said there is an underground network of tunnels that lay beneath the premises, but nobody knows who made these tunnels or what purpose they served. Many inexplicable phenomenons have been reported occurring on the property. Bloody handprints have been found splattered all over the walls. Spirits have been spotted on the premises… even in broad daylight. A narrow stairway leads to an attic where a spirit-sealed talisman is rumored to be locked away. Men have sought this talisman, only to be found later with their bodies broken and rope marks around their wrists. There’s a crumbling old statue of a woman in a kimono, but its head is missing. If you take a photo of a certain window, a young girl can be seen in the developed picture. These incidents have provoked fear in the people of Tokyo, and many believe that those who live near this area will become cursed. The deaths of those seven people are unexplained to this day.”

Now, the question is, did any of this really happen? Probably not. The core allure of this legend is also it’s silver bullet. If such a grisly murder did occur (sources put this between 30 and 80 years ago) in such recent times, where is the record?

It is highly unlikely that no police station or newspaper have records of this mass murder taking place just outside of Tokyo. Regarding the mystery of the location, some believers have offered the notion that the Himuro family has once again taken ownership of the mansion and is currently living there.. but that conflicts with the legend in that all family members were supposedly murdered AND the “firsthand accounts” of events witnessed on the property by locals and researchers.

Another peculiarity of note is that Tecmo advertised the game in North America with the tagline: “Based on a true story,” but without on the original Japanese release.

UPDATE: In the ill-fated Paranormal Searchers 2009 investigation during several cell phone conversations. Dr Matt Adler had mentioned he had uncovered correspondence linking a one Miyuki Ishikawa to Himuro Mansion. That she had lived briefly in Himuro before moving to Thailand and then finally to Venice, Lousiana.

In a strange coincidence Dr Matt Adler, the leader of the 2009 Paranormal Searchers team. had made that year an annoucement that he had discovered the location of Himuro Mansion and had earlier that year (2009) conducted an investigation there.

In 2009 Dr Matt Adler and his team investigating Stuart House in Venice, Louisana, were listed as missing.

Japan has developed an inflatable scooter that weighs practically nothing

The University of Tokyo engineers have developed the Poimo inflatable electric scooter, which is created individually for each owner. It is enough to send your...

A haunted toilet was installed in an amusement park in Japan

A spooky haunted toilet has been installed in Japan’s Lagunasia amusement park. As planned, the spirit of a young girl named Hanako-san lives in the...