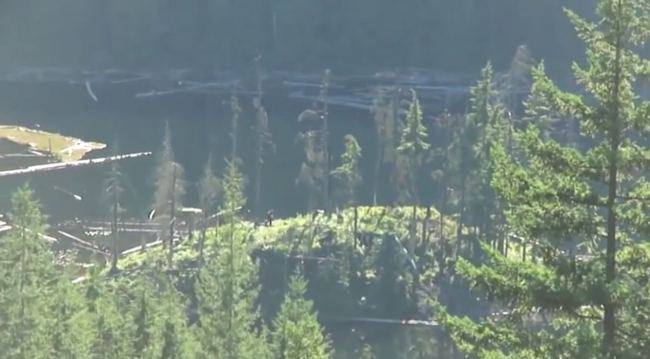 A hiking couple have claimed that new footage they shot while walking in the Canadian wilderness shows the legendary bigfoot. The claim is the latest in a long series of reported sightings in Canada over the past few years.

Although filmed from a distance, it is possible to make out the figure emerging from behind a tree. It is visible for around 20 seconds, before appearing to punch a few leaves out of the way and disappearing out of sight.

According to crypto-zoology website ‘Legend Tracker’, the couple were on a hiking holiday when they spotted the mythical creature in the distance and began to film.

The tantalising footage has left bigfoot believers hoping that experts can examine it and therefore prove that the legendary ape-like sasquatch does indeed live in the forests of North America.

At the beginning of July, Texas veterinarian Melba Ketchum claimed to have proved the existence of sasquatch with DNA evidence, however, the ‘sample’ she provided turned out to contain mostly opossum DNA, mixed in with markers from other animals.

Sasquatch is a Native American term meaning “hairy giant”. Footage filmed in Mantitoba in 2005 appeared to show a large apelike creature, although it was too grainy to be conclusive.

In this article:Bigfoot, Canada, footage