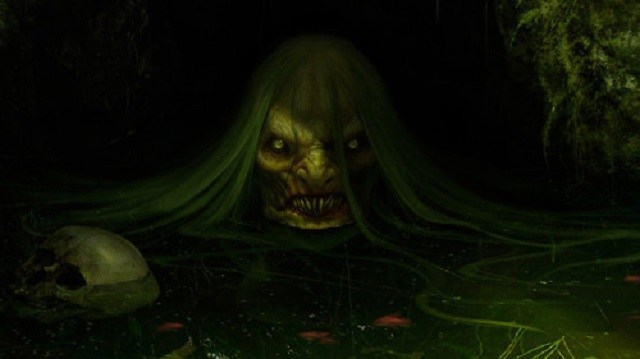 Her name is Jenny Greenteeth, she is a fearsome menace to those who are near her especially children. This legendary hag is known for intentionally drowning both the young and the old. This gave her sheer pleasure watching her victims suffocate to death under a cold watery grave.

It is known that she would even feast upon her victims cooking them up into a stew of sorts. Her intense need to cause pain and suffering to others, is believed to be from her torment in this world as an outcast.

More often she is described having a green complexion with very sharp teeth. This would certainly ward off anyone who would be unfortunate enough to cross paths with her. As with many creepy characters from folklore, she is feared. This particular witch hag is fairly well known in the England area.

If an unsuspecting wanderer would be close to the water’s edge during an afternoon swim, it would certainly be their last. Likewise, if you go walking by any pool, pond or river at night, be on the lookout for Jenny.

She can be found all over the British Isles. This includes her taking shape in many different forms. In Lancashire she is Jinny Greenteeth, in Cheshire and Shropshire she was known as Wicked Jenny, Ginny Greenteeth and Peg o’ Nell, while in Durham she was Peg Powler. She in fact is closely related to the bucca-boo, a type of water spirit which haunted moors and ponds.

Jenny’s origination stems from the central part of Europe among the Slavic people. A lot of missing people were written off as victims of her – who happened to be near the waterways. Her almost terrestrial mermaid appearance from one of her forms would help her lure people towards her, only then would she grab them.

Perhaps it was the shimmering light reflecting from the water onto her green skin. It is also known that she was related to Baba Yaga, who was another witch which took pleasure in eating children and the elderly.

Part of the folklore of this sinister witch comes from heavy amounts of duckweed which could trap a young child underwater thereby drowning them. Certainly this was a danger to small children and even some of the elderly in some watery areas.

One thing is for sure, don’t be alone especially at night near the water. It might be your last gasping breath.