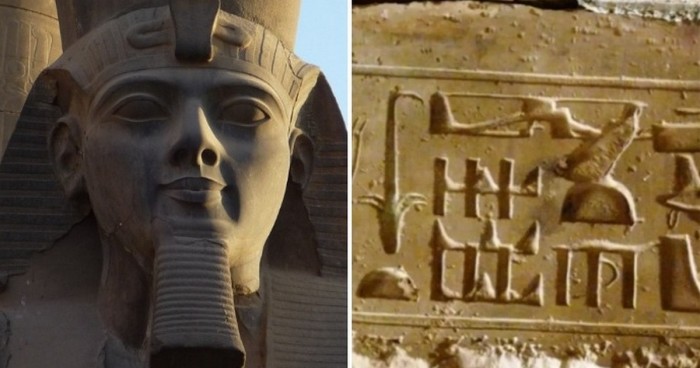 The study of the temple complex in the ancient Egyptian city of Abydos began in the 19th century. There were a lot of hieroglyphs, they were on columns and on beams, guessed under a layer of dirt and soot. But then it was just hieroglyphs. The twentieth century had to come, so that scientists could see that the ancient Egyptians on the walls of the temple depicted a tank, a helicopter and a submarine.

The ancient Egyptian Abydos is located near Luxor – it has a long and extremely interesting history. The temple complex was built on the left bank of the Nile and is dedicated to Osiris, the god who taught mankind gardening and agriculture. Egyptian myths tell how the god Seth killed Osiris, his brother, and since then, he, depicted as a mummy, rules the underworld, the world of the dead. True, archaeologists are sure that the cult of Osiris came to a long-living city and, probably, one of the most populated by this time. It is also believed that before the appearance of the cult of Osiris, Abdos was the religious center of civilization.

Around the XIII century. BC, the construction of the temple complex dedicated to Osiris begins – it was the reign of Set I. It was a pharaoh, famous for many victories and conquests. It is not surprising that the temples of Abydos began to praise the pharaoh, commander, reformer, and warrior.

Mummy of Seti I

After the death of Seti I in 1279 BC power in the country passes to Ramses II. It was in many ways a unique ruler – he builds a lot, develops the country, fights. And he lived for more than 80 years, having ruled at least 60, which was a lot for those times. When it was built a lot, and it was during it that the temple complex of Abydos grew. Now there were palaces, temples of the necropolis.

The 19th century for the exploration of Egypt was incredibly fruitful. In Abydos in 1818 inscriptions were found that were extremely important for the country\’s chronology: the table of Abydos and the list of kings – these were relief columns of hieroglyphs with a list of the country\’s pharaohs who lived before Ramses II. On the walls of the temple were also found numerous \”technological\” drawings, but then they were simply fixed.

And until the end of the twentieth century, these drawings did not interest anyone. Until 1997, when the photos of ufologist Ruth McKinley-Hover appeared on the Internet. She claimed that on a beam in the Osiris temple … images of a helicopter, a submarine and an airplane were found. She argued that this was undoubted evidence of paleocontact meetings of ancient Egyptian and alien civilization. And then again they remembered not only about this beam with its strange icons, but also about other \”technological\” drawings that were previously interpreted only as fantasies of artists.

Of course, the first reaction was to accuse the scientist of falsification. But numerous photos of the indicated place confirmed – yes, these hieroglyphs have probably existed since the time of Seti I or Ramses II and indeed represent a record, probably encrypted.

Explanations of the appearance of hieroglyphs of this form were varied. Official science immediately indicated that there is an imposition of hieroglyphs made earlier and later, for example, at the time of the Network first, and then, at the time of Ramses. Part of the plaster on which the reliefs are made, collapsed and in this way it turned out that we can see today.

Of course, such an explanation did not suit everyone. The times of Ancient Egypt, of course, are studied well, but far from as well as they should. And the basis for the study, in general, does not suit everyone – after all, the decoding of the hieroglyphs, the beginning of which was laid by Jean-Francois Champollion, is not satisfactory for all scientists. And if we recall that there were accusations that Champollion was knocking down texts that “did not fit” into his scheme, then it was completely doubtful. In addition, in other churches of the same Abydos there are many reliefs that confound scientists.

In addition to the mysterious inscription, Abydos does not tire of discovering more and more mysteries. One of them is located in the same temple of Seti I. This is a certain room, which is now called “room K”. Access here is possible only from above, from the roof of the temple, through the hole. The “room” itself is two-story, has neither doors nor windows and, which is especially surprising for Egyptian architecture, is deprived of any images and inscriptions at all.

Osirion is also causing no less questions – a construction much more ancient, built of megaliths. It was built Abydos. And it itself, probably, was built long before the advent of ancient Egyptian civilization, and possibly refers to the culture on the remains of which Ancient Egypt flourished.

Near Osirion were discovered the remains of an extremely ancient city – it existed much earlier than the Egyptian pharaohs, and, especially, the cult of Osiris. And in it was everything that was needed for a real crowded center – buildings, tombs, workshops. Ancient utensils and tools were found.

Be that as it may, the reliefs, inscriptions and temples found to date require a more thorough and, importantly, objective study. Perhaps the look of amateur historians will help scientists unravel ancient secrets. After all, Champollion was an amateur …

In this article:Abydos, cult of Osiris