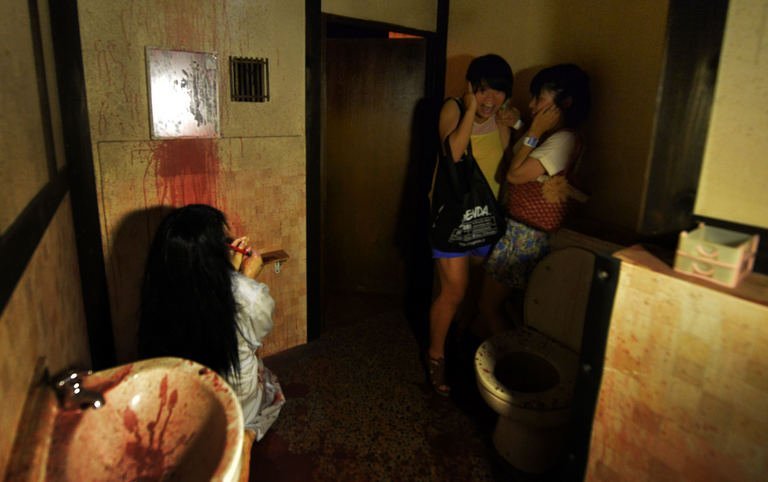 A shiver down the spine is one way of keeping cool during summer in Japan — traditionally viewed as a time when the spirit world makes its presence felt.

August sees millions of Japanese return to their home towns for the Obon season, in which relatives gather to temporarily welcome back the spirits of their dead forebears.

Despite its association with the deceased, Obon is a cheerful period that frequently involves fireworks and dancing in “yukata”, a light summer kimono.

But it’s also a time for ghost stories, with dozens of temporary haunted houses opening up across the country to mark the season.

“Goosebumps can be very refreshing,” said Sayaka Makabe, a schoolgirl who came to witness “The Cursed Tooth” at Tokyo Dome, which tells the story of a woman driven to madness after sacrificing her once pearly white teeth for her child and has been condemned to pull them out one-by-one.

To allow her to rest in peace, visitors must pluck a black tooth from her mouth and take it to the exit. As her screams echo around the building, a loudspeaker relays the public’s fearful cries to those queuing up to get in.

Three small children cling to their father, Ryuta Sato, in terror as they stand in front of an old woman with a knife stuck in her throat, surrounded by pools of fake blood.

“I used to visit these kinds of things when I was a kid,” said 42-year-old Sato, who admitted he was more scared than he was letting on.

“The dead come back to the human world in August. This is a period in which all kinds of terrifying things are supposed to happen,” said Hirofumi Gomi, the creator of “The Cursed Tooth”, who is credited with setting up dozens of other haunted houses around the country.

The tradition goes back to the Edo period (1603-1868), when people packed Kabuki theatres in August to see ghost stories.

Obon religious ceremonies are based on the popular belief that ancestral spirits spend a few days on Earth in the month of August.

Families craft small “horses” from cucumbers and toothpicks, symbolising a form of transport for spirits to come from the netherworld.

As the festival ends, small boats with lanterns are set adrift, taking souls back to heaven.

“I have always practised this tradition because I think my parents really come back, I sometimes feel their presence with me,” said Yumiko Tominaga, visiting a cemetery in Hitachiota, north of Tokyo, with her husband to sweep the graves of his ancestors.

“When I die, if I go back to Earth, I will certainly be happy if my children greet me the same way.”