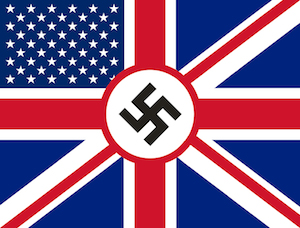 Did you remember, remember the Fifth of November? Well just in case you forgot, that means it’s Guy Fawkes Day. Michael Shammas tells us why Guy Fawkes and its modern day movie iteration V for Vendetta is more important than ever, at PolicyMic:

Every Nov. 5 for the past few years, I’ve sat back with a few friends to watch V for Vendetta. While ostensibly we did this to commemorate Guy Fawkes Day, which marks the anniversary of British revolutionary Guy Fawkes’s attempt to blow up the Parliament in 1605, we really did it because everyone else was doing it, and we were bored.

But this Nov. 5, I expect I’ll be a bit more alert when I watch V. Why? Because the movie’s lessons are more important now than ever before.

Originally a graphic novel by Alan Moore, V for Vendetta is set in a dystopian England where a revolutionary wearing a Guy Fawkes mask sets out to destroy a fascist party called Norsefire by convincing citizens to stand up and rule themselves.

The most important lesson that the movie teaches, is distilled by this scene, where V talks about how irrational fear has resulted in the sacrificing of liberty for security:

Additionally, this quote is a reminder of recent events:

“Where once you had the freedom to object, to think and speak as you saw fit, you now have censors and systems of surveillance coercing your conformity and soliciting your submission. How did this happen? Who’s to blame? Well, certainly there are those more responsible than others … but … truth be told, if you’re looking for the guilty, you need only look into a mirror. I know why you did it. I know you were afraid. Who wouldn’t be? War, terror, disease. There were a myriad of problems which conspired to corrupt your reason and rob you of your common sense. Fear got the best of you, and in your panic you turned to the now-High Chancellor … He promised you order, he promised you peace, and all he demanded in return was your silent, obedient consent.”

Because of fear, Americans — like the English citizens in V — are trading our precious liberty in for a false sense of security. Sept. 11 happened, and it was horrible, but instead of reacting with resolve, we reacted with fear. We passed the so-called “Patriot” Act, which implied that anyone who disagreed with this utter trampling of the Bill of Rights was a traitor, or worse. We held people in prison without respecting habeas corpus. And so on…

In this article:Alan Moore, Guy Fawkes, V For Vendetta