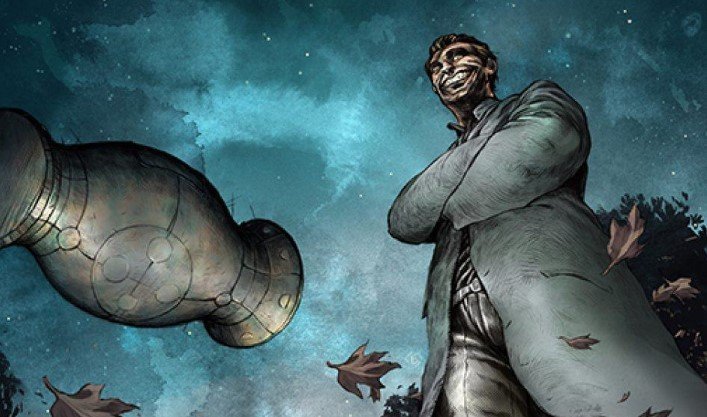 The legend of the Grinning Man has continued to grow over the past 50 years, and the various accounts of encounters with this menacing figure have produced far more questions than answers.

While the Grinning Man is generally believed to be a sentient being, there is quite a bit of debate as to whether he is an alien or an apparition of some kind. Some have speculated that there may even be more than one Grinning Man, or at least several different manifestations of him.

Others think because of the Grinning Man’s reported interest in UFO’s that he may be a peculiar example of the well known Men in Black.

One thing that is consistent among the various reports about the Grinning Man is that he looks very ominous and intimidating, and always bears a wide, sinister grin on his face. Eyewitness accounts claim that the Grinning Man is a hulking figure who stands over 6 feet tall, with a bald head, sunken eyes and a very prominent eyebrow ridge.

According to the majority of reports, the Grinning Man seems to resemble Jim Carrey’s character in the movie “The Mask”, with the exaggerated smile and prominent bone structure, but with a much more malicious demeanor.

One of the more well-known reported encounters with the Grinning Man occurred in October of 1966, when two boys, Marvin Munoz and James Yanchitis, were walking home in New Jersey. They reached a corner near the New Jersey Turnpike when James spotted a strange figure standing on the other side of a fence near where they were walking.

James nudged Marvin to call his attention to the man as well. They would both later describe the figure they saw as a “really big man” who displayed a “big old grin.” Not willing to take a chance on their safety, they quickly fled the area before engaging the mysterious figure in any kind of way.

In that same neighborhood, a resident later claimed to have been “chased” by a “tall green man” down the same street in which the two boys spotted the Grinning Man.

The experience of the two young boys caught the interest of famed parapsychologist investigator John A. Keel, author of the paranormal novel “The Mothman Prophecies.” Keel interviewed the two boys a few days after the incident, questioning them separately to ensure that neither one of them would influence the other one’s answers.

Each boy gave the exact same story, claiming that the man was over six feet tall, and was dressed in what appeared to be shiny green coveralls that glistened in the street lights. Neither one of the boys recalled seeing any hair, ears or nose on the strange man, but both distinctly remembered his malevolent grin.

Other similar incidents were reported in several places throughout the country, including Parkersburg, West Virginia, which is roughly 40 miles from Point Pleasant, the place where the famous Mothman sightings occurred.

In November of 1966, a sewing machine salesman by the name of Woodrow Derenberger was driving his truck home when he heard a loud sound similar to a crash or an explosion. Immediately after he heard the noise, a vehicle came seemingly out of nowhere and quickly passed him from behind.

Once the vehicle was in front of Derenberger’s truck, it slowed down dramatically and stopped in the middle of the road, blocking the entire thoroughfare. Derenberger would later describe the vehicle as the strangest thing he had ever seen, as it featured an almost onion-like shape, with narrow ends and a bulge in the center.

Derenberger then stated that a very tall man dressed in a “gleaming green” outfit stepped out of the vehicle and began to communicate with him via some sort of thought transference method. The Grinning Man telepathically asked Derenberger a series of questions about UFO sightings in the local area, and then identified himself as “Indrid Cold.”

Similar to the accounts of Munoz and Yanchitis, Derenberger also described the figure as having a wide, eerie grin, but also noted that the entity had somewhat elongated eyes.

Not too long after Derenberger’s initial run-in with the Grinning Man, other Point Pleasant residents also reported strange sightings with similar characteristics, and Derenberger himself claimed to have been visited by Indrid Cold on several subsequent occasions.

Eventually Derenberger would go on to state that Cold had not only divulged information to him regarding his planet of origin, but that the Grinning Man had actually taken Derenberger with him on a trip back to his home planet, known as “Lanulos.”

According to Derenberger, the residents of Lanulos wore colorful outfits, and the native language of the planet appeared to be similar to hieroglyphics, containing “squiggly” and “oriental-like” characters. Derenberger would eventually recount his experiences in a book entitled “Visitors from Lanulos.”

Accounts of the Grinning Man have gradually become scarcer since the late 1970s, with only a handful of encounters having been reported over the past few decades.

Perhaps the most intriguing aspect of the Grinning Man is that this strange being doesn’t quite fit into any of the “typical” categories of paranormal phenomena–he’s not fully an alien, but also not fully a monster either.

While some have summarily dismissed the various accounts of the Grinning Man as little more than an imaginary contrivance or an urban legend, others have strongly asserted that their experiences with this mystifying entity are absolutely true.

One thing is for sure–regardless of whether or not his existence can ever be proven, the Grinning Man remains one of the most perplexing and obscure figures in the world of the paranormal.

In this article:Grinning Man, strange beings