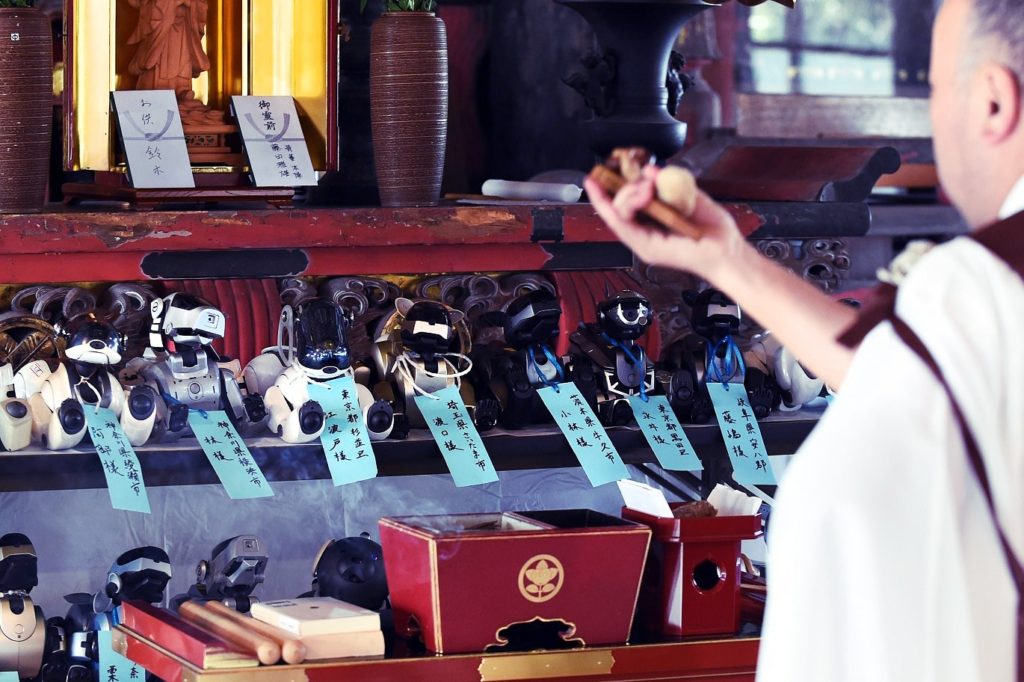 You might recall in 2014, different news sources reported on funerals held for AIBO robot dogs in Japan. Since Sony stopped repairing and making spare parts for AIBOs, the puppies were gradually “dying out.” In reaction to this, Buddhist priests have been holding funeral services for them.

This might seem pretty odd to anyone outside Japan. Indeed, a great deal of people find it strange as well. Some can even find it quite upsetting that somehow, in treating an artificial human creation as a living thing, we’ve lost contact with reality and are forgetting what makes living things special.

But treating specific man-made creations with the identical regard as organic objects is not anything new in Japan. There is an entire article on funeral rites for inanimate items here. Objects that might be disposed of in a ritualistic style in Japan have included needles, chopsticks, combs and bladed items — generally, things that people use in a fairly personal, intimate manner.

Other things which might be disposed of more attentively are dolls. Some Japanese are reluctant to throw out dolls as ordinary rubbish since they resemble people, and therefore it somehow seems unkind to deal with them as trash.

There are various reasons for doing so. One is regarding the idea of ”sympathetic magic” as clarified in The Golden Bough.  There are two types of sympathetic magic. First there is “homeopathic magic,” in which an item could be attached to some other object by simply resembling it.

This will explain the significance of disposing of dolls through ritual means — they look like people, therefore they have to be treated like people. Second, there’s “contagious magic,” where two otherwise unrelated items form a magic link by simply being in contact with each other.

In the case of the personal items listed above, they’re viewed as ”contaminated” with this individual’s spirit, providing them a supernatural relationship with that person. As this kind of relationship could be harmful, ritual disposal of these objects prevents any harm from coming to the prior owner.

Ultimately, the idea of treating things with respect in Japan very likely has a relation to the animistic character of Shinto. In Shinto, kami can occupy both man-made and natural objects. In a similar manner, things which have been carefully handpicked, such as traditional inks and masks, are considered to possess, if not something so evasive as kami, a sort of soul or spirit which requires respect.

Disposing of such an item in a careless, disrespectful way can violate the spirit, which might become vengeful; this is the foundation for the belief in O-bake — ghosts which frequently take the form of old, disused items like umbrellas or lanterns.

Mask for Japanese Noh theatre. Hand-crafted noh masks are treated with great caution and respect — actors will talk and bow before putting them on.

Apart from the appeasement of spirits which may inhibit an item, an individual might want to dispose of things in ritual style for more symbolic purposes. By holding funeral rites for items, one is showing respect for this thing’s creator, acknowledging it is a piece of artwork that’s taken time and skill to make. Also, one is showing gratitude for the service which the item has contributed.

It is a method of recognizing that without the object, your life could have been harder and you’re grateful for that thing’s presence. It shows you’ve created an attachment with this particular thing and therefore are reluctant to part with it.

By being thankful to each of the items we use, instead of thoughtlessly throwing them away when they have outlived their usefulness, we step from the ”disposable world” mentality that’s so commonplace nowadays.

Respecting man-made objects reminds us that these items initially came from nature, and are consequently a valuable resource that has to be used carefully and sustainably. This applies to some items created by man, be it an old needle or a robotic puppy.

In this article:dolls, Japan, sympathetic magic