From The Daily Galaxy

“The Great Attractor”– Is Something Pulling Our Region of the Universe Towards a Colossal Unseen Mass?

A huge volume of space that includes the Milky Way and super-clusters of galaxies is flowing towards a mysterious, gigantic unseen mass astronomers have dubbed “The Great Attractor,” some 250 million light years from our Solar System.

The Milky Way and Andromeda galaxies are the dominant structures in a galaxy cluster called the Local Group which is, in turn, an outlying member of the Virgo supercluster. Andromeda–about 2.2 million light-years from the Milky Way–is speeding toward our galaxy at 200,000 miles per hour.

This motion can only be accounted for by gravitational attraction, even though the mass that we can observe is not nearly great enough to exert that kind of pull. The only thing that could explain the movement of Andromeda is the gravitational pull of a lot of unseen mass–perhaps the equivalent of 10 Milky Way-size galaxies–lying between the two galaxies.

Meanwhile, our entire Local Group is hurtling toward the center of the Virgo Cluster (image above) at one million miles per hour.

The Milky Way and its neighboring Andromeda galaxy, along with some 30 smaller ones, form what is known as the Local Group, which lies on the outskirts of a “super cluster”—a grouping of thousands of galaxies—known as Virgo, which is also pulled toward the Great Attractor. Based on the velocities at these scales, the unseen mass inhabiting the voids between the galaxies and clusters of galaxies amounts to perhaps 10 times more than the visible matter. 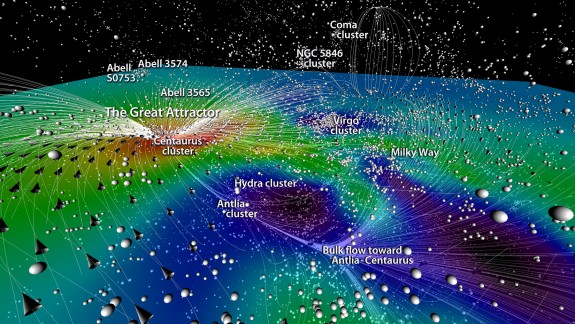 This map shows the flows of galaxies in the Universe. The galaxies (white spheres) are like dead branches in a sea. Currents carry them from an island (galaxy cluster) to the closest larger island of galaxies, the Great Attractor region. Red and yellow colors show the islands, and dark blue shows the voids that galaxies avoid by following the currents. Click on picture for larger view.