When inspectors from Peru’s Technical Administration for Forestry and Wildlife (ATFFS) in Puerto Inca Province received a complaint about the presence of miners in the buffer zone around the El Sira Communal Reserve, they sent up a drone that captured images of a forest devastated by gold mining. The images revealed piles of dirt and pools of green water.

Jorge Valdivia Ramírez, the administrator of the ATFFS office in Puerto Inca, told Mongabay Latam that the inspection was done because residents from Puerto Inca were concerned about the potentially harmful effects of gold mining in the area. “There is evidence that primary forests and water resources have been affected,” Valdivia said.

A report by Puerto Inca ATFFS found that gold mining in the area is destroying primary forests and has affected the basins of the Pintuyacu and Quimpichari rivers. Additionally, the mining operations overlap with land owned by the Tsirotzire indigenous community.

“Large areas of land are being preyed upon, and the effects of pollution are already being seen in the Pintuyacu River,” says Sodi Claudio Tolentino, a Puerto Inca resident who has protested mining activities in the community since 2012. “They extract gold with heavy machinery and destroy everything in their path.” 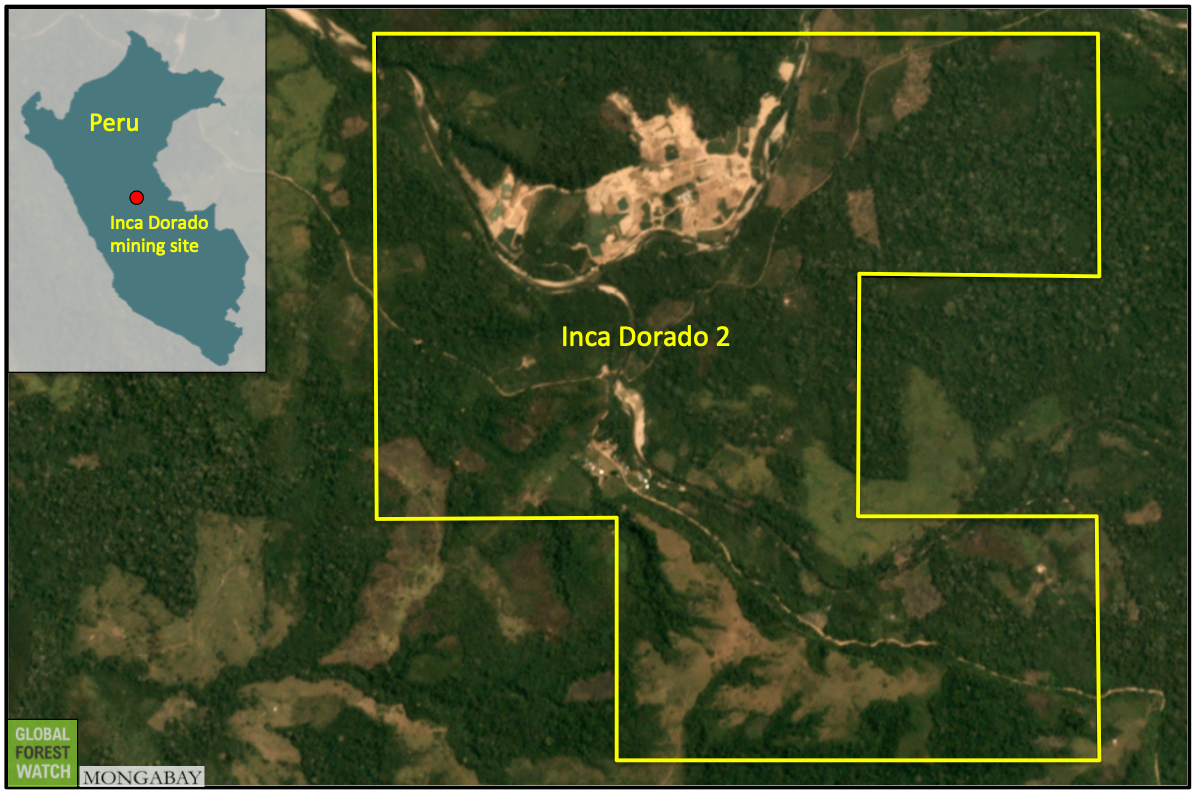 The mine site is located in the Inca Dorado 2 concession, which is situated in the El Sira Communal Reserve buffer zone. Satellite imagery captured in September 2019 by Planet Labs. 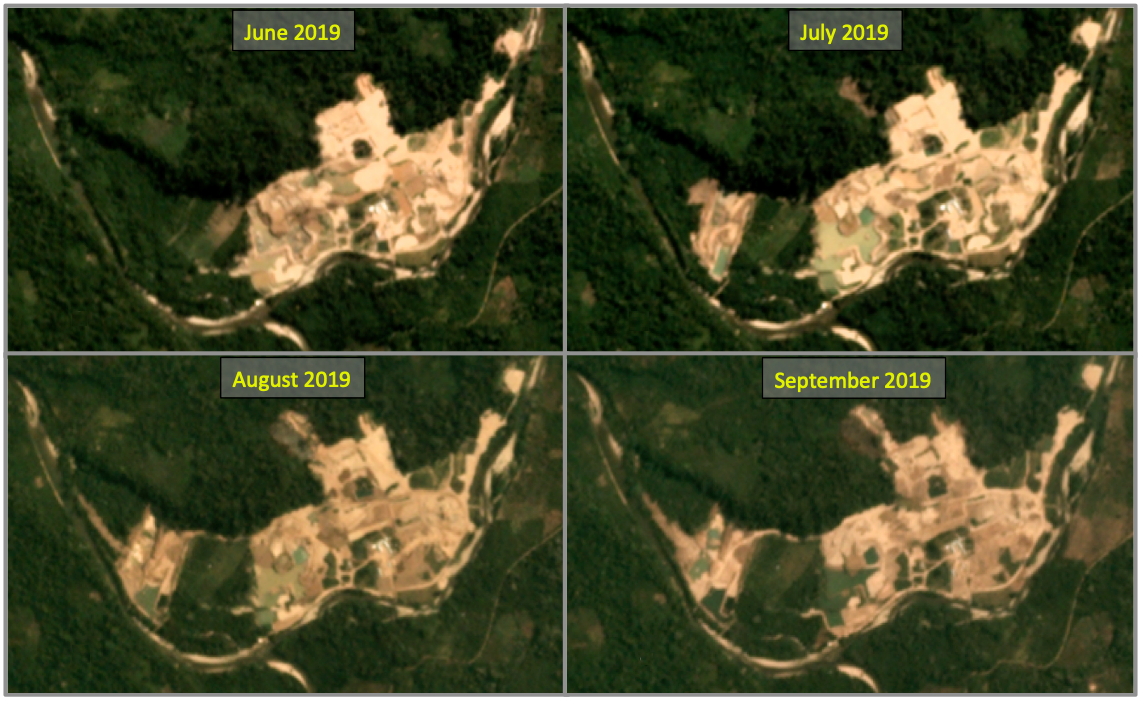 While clearing began shortly after the concession was granted in 2012, mine-related deforestation has been ramping up at the site this year. Imagery from Planet Labs.

he mining is being done in a concession legally granted to Chinese national Bing Xiao He by the Peruvian government. However, regional authorities say that the mining is happening without the appropriate permits.

Tolentino says he and other Puerto Inca residents have sent letters to officials from the Ministry of Energy and Mines, the Ministry of the Environment, the Ministry of Agriculture, the forestry sector, the judicial system, and more. “We have filed complaints about the destruction of the environment,” he said. “These are Chinese and Korean citizens who have brought in heavy machinery to extract gold. They are advancing within the El Sira buffer zone and are already almost reaching the reserved area.”

In 2012 Bing Xiao He was granted a 1,730-acre concession by the Geological, Mining, and Metallurgical Institute (INGEMMET), which is part of Peru’s Ministry of Energy and Mines. However, the June 6 government inspection revealed irregularities in the “Inca Dorado 2” mining project taking place in the concession owned by Bing. 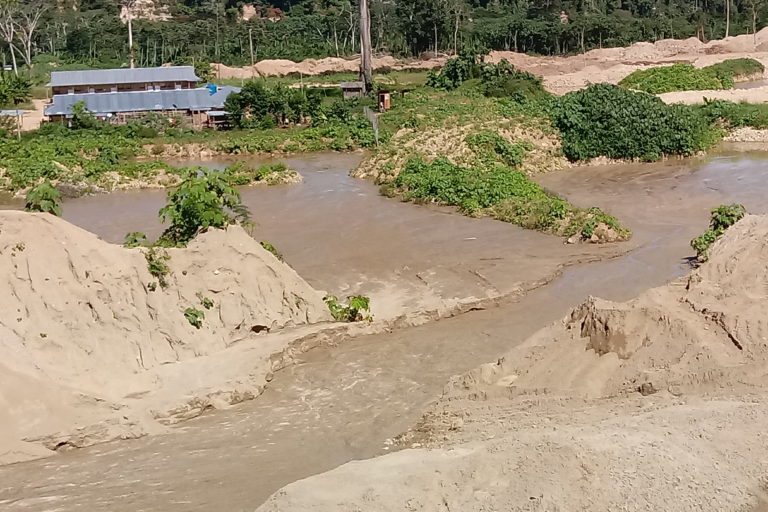 In order to proceed with mining, a license allowing mineral resource exploration and extraction must be obtained from the government. This is granted only if environmental impact studies give the all-clear, and if other supporting permits are obtained from the Ministry of Energy and Mines as well as from regional governments.

However, the company managing the Inca Dorado 2 mine failed to request the appropriate supporting permits, according to the ATFFS report. This indicates Inca Dorado 2 may be operating illegally without a permit.

“They do not have authorization for deforestation to start the mining phase as required by law, nor do they have authorization from the Regional Directorate of Energy and Mine,” said ATFFS field technician Eliazar Romero Julcarina, who produced the report.

The Peruvian government provides a document called the Integral Registry of Mining Formalization (REINFO) designed to regulate small-scale (often called “artisanal”) mining. Bing is included on the REINFO list as an artisanal miner with three concessions to his name: Inca Dorado 1, Inca Dorado 2, and Inca Dorado 6.

However, INGEMMET-owned online portal “Geocatmin” shows Bing Xiao He owns four concessions. Three of these are located within the El Sira buffer zone, with the fourth, called “Inca Dorado 8,” in an area further south. A record sent from Peru’s National Service of Natural Protected Areas (SERNANP) to INGEMMET in Nov. 2018 states that 2,470 acres of the proposed mining area overlap with the El Sira buffer zone. According to the record, mining in that area is incompatible with the objectives of the El Sira Communal Reserve. 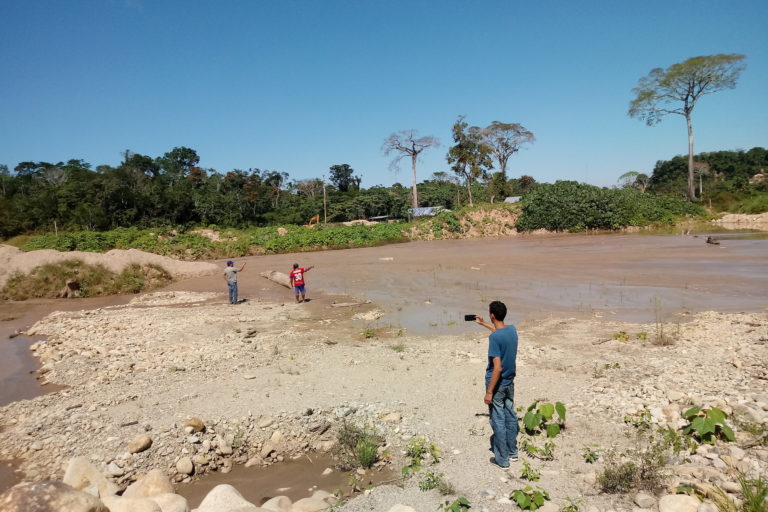 Local residents say the mining operation is affecting a larger area than expected. Jorge Burgos Abanto, a member of the Puerto Inca civil society organization speaking out against the mine, says that “these Chinese and Korean citizens are registered as artisanal miners, but they develop large mining operations.”

Production volumes of the Inca Dorado 2 affirm claims of large-scale mining activity, according to Daniel Huamanchumo Fiestas, from the Regional Directorate of Energy and Mines.

Huamanchumo also says that one of the concessions is close to a protected area and that it overlaps with the territory of indigenous communities.

In response to these issues, the Regional Directorate of Energy and Mines ordered the suspension of activities in the Inca Dorado 2 mining concession in August. However, those who live nearby claim that the miners continue to mine gold at night. 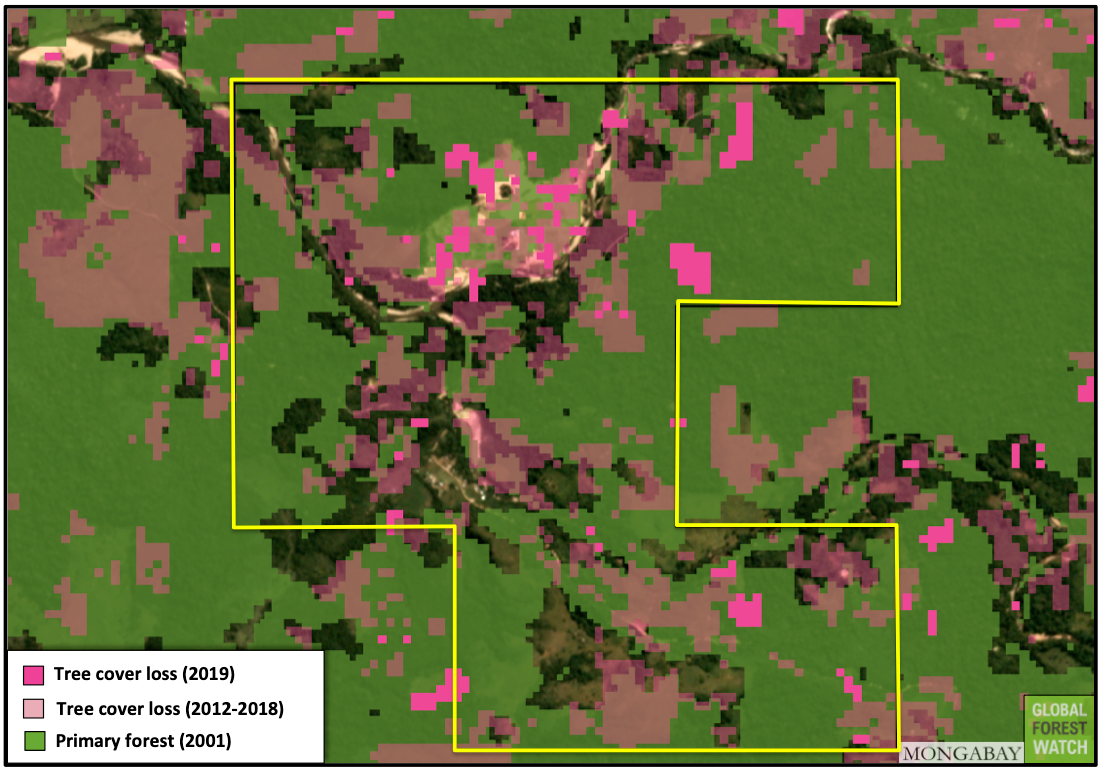 Most of the Inca Dorado 2 concession, including the mining site, was covered in primary forest in 2001. But much of this has been cleared since Bing Xiao He obtained the concession in 2012, with satellite data showing an increase in the rate of deforestation in 2019. Source: GLAD/UMD, accessed through Global Forest Watch 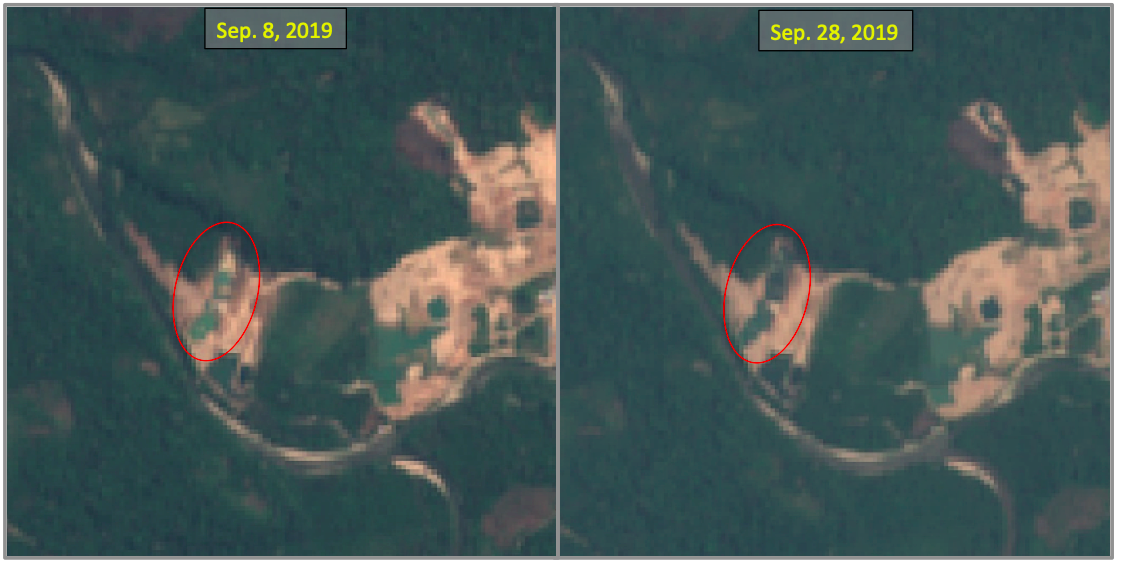 Satellite imagery show deforestation at the Inca Dorado 2 mine site dropped off after the stop work order was issued by the Regional Directorate of Energy and Mines in August. However, images captured in September show at least one area has changed since then, indicating that perhaps not all mining has ceased. 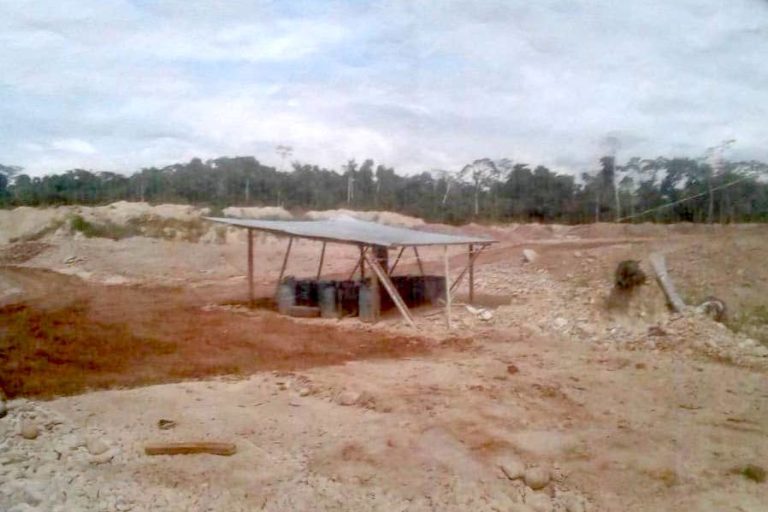 What once was forest is now a barren wasteland. Image courtesy of Puerto Inca ATFFS.

José Guzmán Ferro confirmed the destruction when he recently visited Inca Dorado 2 and the Estela Madre Iluminada, another mining concession owned by Chinese nationals. Guzmán works at the Office of the Public Prosecutor Specializing in Environmental Matters of Ucayali, which has Puerto Inca Province under its jurisdiction.

“We have traveled through the areas where gold is being extracted, and we confirm that the primary forests are being deforested,” Guzmán said. “We are going to denounce [those complicit in mining] for their environmental pollution, alteration of the landscape, and loss of forest.”

The area has high biodiversity and is home to threatened wildlife, including the endangered purple-sided leaf frog (Callimedusa baltea) that has a known range of only 117 square kilometers (45 square miles). The primary forest where the mining project is operating is also comprised of important tree species, according to the ATFFS report. One of these is the kapok tree (Ceiba pentandra), a species listed as “Near Threatened” in Peru.

A representative of the Inca Dorado 2 mining company asserts “the mining complies with the legal and environmental requirements mandated by Peruvian legislation.” The representative also said operations are having “no impact on the water,” and that chemicals are not being dumped into water sources.

Bing Xiao He declined to comment on most of the allegations against his operations. However, regarding the permit granted by SERNANP, Bing said he previously received a report that included a “Technical Opinion … developed by specialists from SERNANP” that mining is compatible with the ideals of El Sira Communam Reserve. Yet Kary Ríos, the head of the El Sira Communal Reserve, says that this “compatibility” opinion was referencing the concession request and allocation, but does not apply to the initiation of mining activities. 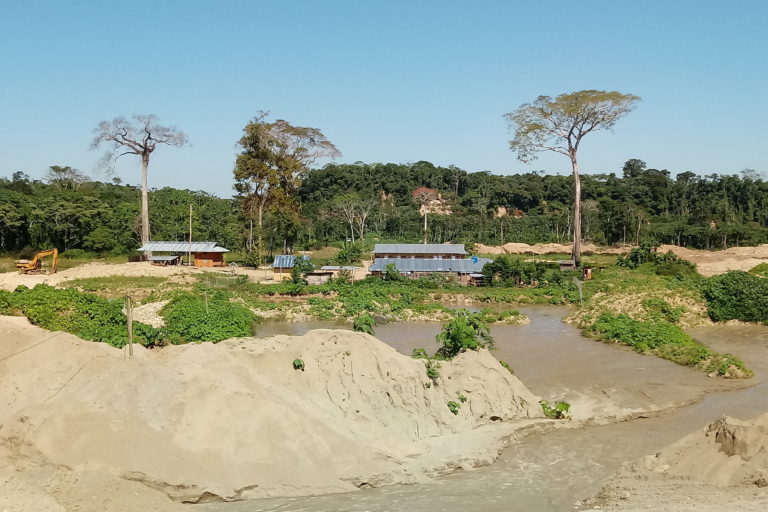 In addition to the Office of the Public Prosecutor Specializing in Environmental Matters of Ucayali, the inspection also involved personnel from SERNANP, the regional forest authority of Huánuco, the ATFFS of Puerto Inca, the Regional Directorate of Energy and Mines of Huánuco, and the Environmental Forensics Team (EFOMA).

“EFOMA has carried out a more precise and detailed environmental assessment, and water and soil samples have been collected to evaluate environmental pollution,” said Guzmán, who added that the findings, once they’re ascertained, will help create a formal accusation against the mining projects.

Meanwhile, satellite data indicate mining may continue at Puerto Inca 2, despite the suspension of activity ordered in August by the Regional Directorate of Energy and Mines. Guzmán said that mining activity has not yet begun in Bing’s other concessions. However, heavy equipment is appearing them, signaling that operations may be gearing up there, as well.

This is a translated and adapted version of a story that was produced by Mongabay Latam and first published on September 6, 2019.

Banner image: An aerial view, taken by drone, of the Inca Dorado 2 mining project. Image courtesy of the ATFFS of Puerto Inca.

Editor’s note: This story was powered by Places to Watch, a Global Forest Watch (GFW) initiative designed to quickly identify concerning forest loss around the world and catalyze further investigation of these areas. Places to Watch draws on a combination of near-real-time satellite data, automated algorithms and field intelligence to identify new areas on a monthly basis. In partnership with Mongabay, GFW is supporting data-driven journalism by providing data and maps generated by Places to Watch. Mongabay maintains complete editorial independence over the stories reported using this data.

Feedback: Use this form to send a message to the editor of this post. If you want to post a public comment, you can do that at the bottom of the page.

Morgan has been writing for Mongabay since 2008 and came on full-time in 2014. Trained in biology, Morgan has taken any available opportunity to learn more about the world, from working as a fisheries biologist aboard longliners and freighters in the South Pacific to evaluating river health in western Montana. Morgan spent eight years editing technical papers before jumping into journalism, with more than 50 manuscripts under her belt. Currently, she manages Mongabay’s forests and global palm oil reporting programs.

**This article (Peru: Gold Mine Operating Without License Destroys Primary Forest in Protected Area) was originally posted at Mongabay.com and is re-posted here with permission.** 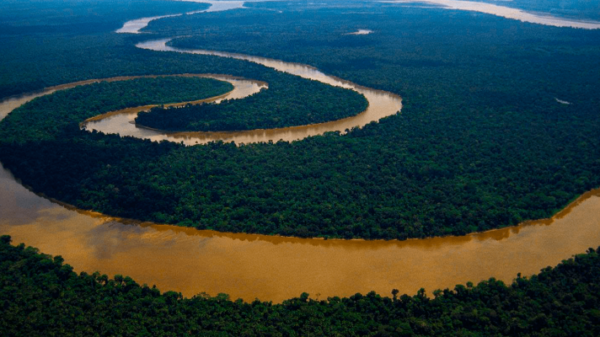 The National Aeronautics and Space Administration (NASA) recently announced that Peru’s “Golden River” photographed from the International Space Station was shining golden under the sun. However, this beautiful ” Golden...