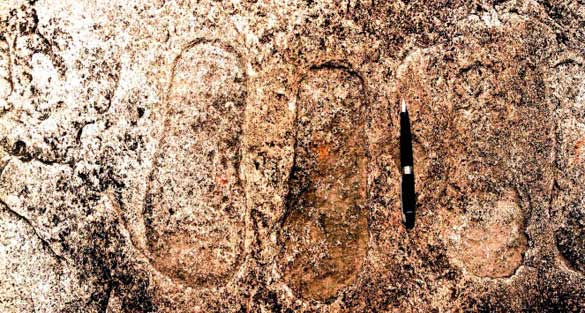 Ancient footprints and a carving of a “flying object” may represent where gods from the sky have landed according to an Indian geologist.

Geologists Nitish Priyadarshi has been researching large footprints found in Piska Nagri village, a town on the outskirts of Ranchi City in Jharkhand State in India. They measure 11 inches in length and 5 inches in width, and have the appearance of someone wearing wooden sandals. They are in granite rock, which indicates to Priyadarshi that they are carved rather than imprinted. 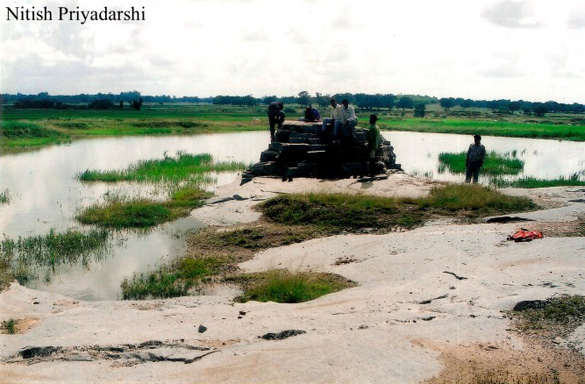 Locals sit on the rock with engravings of two pairs of footprints. Rest of the rock was destroyed in rock mining and locals preserved this portion because they believe the footprints to be of mythological king gods Rama and Lakshaman. (Credit: Nitish Priyadarshi)

The local legend is that they are from the sibling God-kings, Lord Rama and Lord Lakshmana, who it is said wandered these lands in search of Rama’s wife, Sita. Priyadarshi speculates, “[The footprints] may have been made by the local people manually at that time in memory of the visitors.”

Priyadarshi says that he finds it interesting that nearby is a carving of a “flying object.” He feels the second carving may also have a special meaning. He says:

The footprints and the flying object are on the same piece of rock on each other’s side. Maybe they were engraved to show that the two king gods arrived at the place on a flying object. 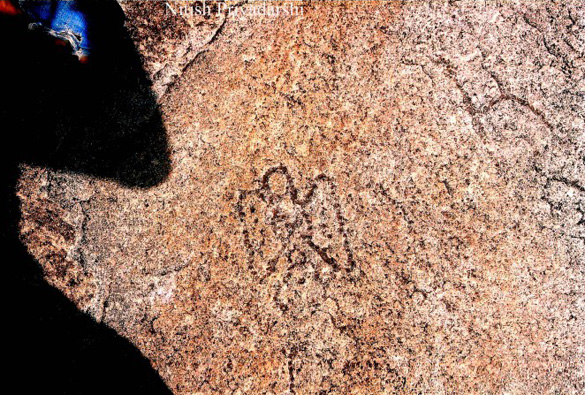 Picture of an engraved flying object found on a rock in Piska Nagri village, on the outskirts of Ranchi City in Jharkahnd State, India. (Credit: Nitish Priyadarshi)

According to the Epoch Times, there are ancient footprints found all over the world, some are natural and some are carved for various reasons. They note that the Romans carved footprints when they left on a journey as a sign of thanksgiving for a safe return, and carved footprints in Ireland and northern Europe represented kingship or chieftainship.

We live in a highly advanced, technical world, but there are nevertheless a great many mysteries all around us. Ancient places and mysterious beings, sunken worlds and cultures, landscapes imbued with symbolism, unexplained apparitions, and unbelievable finds from ancient times—all of these remain mysteries for humankind, despite intense investigations.

In this article:footprints, Gods from the sky, India