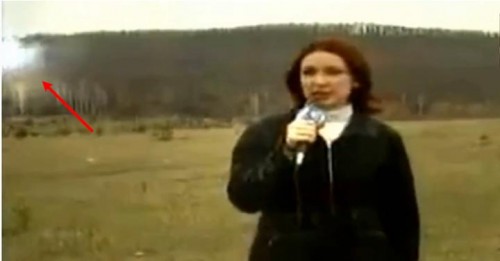 Sometimes we see things that happen so quickly, it’s difficult to even rationalize what has transpired. This is what allegedly happened during a live Russian news broadcast when an astonishing event occurred.

As you will see, the news reporter appears to be visibly shaken and confused by what she is witnessing. Take a look at the video from ADGUK and decide for yourself.

Although this incident happened quite some time ago, I hadn’t heard about it until the video was uploaded on Youtube yesterday and I’m willing to bet this is news to many of our readers as well.

Interesting footage from Russia which seems to show a glowing object appear behind a TV reporter during a recording. This made news headlines in various parts of Russia last year but the mainstream media did not pick it up or chose not to. I will be adding a translation to this shortly so stay tuned. What could this object be, an Alien, UFO, or something else, as always you decide.

See my translation below (the short version (paraphrased):

Reporter: We see how this area has changed over the last 350 years….. Cameraman: Turn around! Look! Reporter: What is that ?! What is that?! Wooow! News Anchor: Can you give us an idea as to what this was? Guest Commentator: Things are being witnessed in the sky more and more…..

In essence, The field crew is shocked and the guest commentator has no explanation for what they witnessed.

Logic can give us all sorts of explanations for this event, but there seems to be a glitch in every interpretive breakdown I can come up with. The only answer that is caveat free seems to be hoax, which could very well be the case. The draw back to the hoax theory is the reaction by the reporter. Watching her closely shows no premeditation. When you’re in on a hoax it’s very difficult not to give it away with body movements such as eyes glancing unnaturally toward the area that will ultimately be the focus. One of the biggest giveaways of a video hoax is pre-event subject placement. As we can clearly see, the reporter is center screen when the action begins to unfold.

ADGUK has been a source for us on occasion and while they tend to show us hard to believe content, they always seem to have a grain of authenticity to their videos. Of course this makes for difficult conclusions. I may be wrong, but I don’t think ADGUK has ever spoofed or hoaxed the public as a knowing participant. Then again, they could be good enough to make themselves appear somewhat unassuming.

Since I’m not doing an investigation on this one, I’ll leave it up to the readers to decide what they will.

The source as mentioned several times is ADGUK over at Youtube.