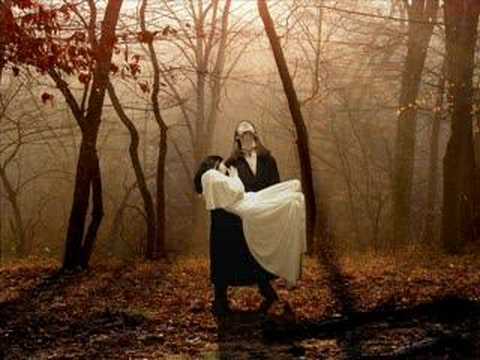 In December, 1932, a down and out Hungarian named Reszo Seress was trying to make a living as a songwriter in Paris, but kept failing miserably. All of his compositions failed to impress the music publishers of France, but Seress carried on chasing his dream nevertheless. He was determined to become an internationally famous songwriter. His girlfriend had constant rows with him over the insecurity of his ambitious life. She urged him to get a full-time 9 to 5 job, but Seress was uncompromising. He told her he was to be a songwriter or a hobo, and that was that.

One afternoon, things finally came to a head. Seress and his fiancée had a fierce row over his utter failure as a composer, and the couple parted with angry words.

On the day after the row – which happened to be a Sunday – Seress sat at the piano in his apartment, gazing morosely through the window at the Parisian skyline. Outside, storm-clouds gathered in the grey sky, and soon the heavy rain began to pelt down.

“What a gloomy Sunday” Seress said to himself as he played about on the piano’s ivories, and quite suddenly, his hands began to play a strange melancholy melody that seemed to encapsulate the downhearted way he was feeling over his quarrel with his girl and the state of the dispiriting weather.

“Yes, Gloomy Sunday! That will be the title of my new song” muttered Seress, excitedly, and he grabbed a pencil and wrote the notes down on an old postcard. Thirty minutes later he had completed the song.

Seress sent his composition off to a music publisher and waited for acceptance with a lot more hope than he usually had in his heart. A few days later, the song-sheet was returned with a rejection note stapled to it that stated: “Gloomy Sunday has a weird but highly depressing melody and rhythm, and we are sorry to say that we cannot use it.” The song was sent off again to another publisher, and this time it was accepted. The music publisher told Seress that his song would soon be distributed to all the major cities of the world. The young Hungarian was ecstatic.

But a few months after Gloomy Sunday was printed, there were a spate of strange occurrences that were allegedly sparked off by the new song. In Berlin, a young man requested a band to play Gloomy Sunday, and after the number was performed, the man went home and blasted himself in the head with a revolver after complaining to relatives that he felt severely depressed by the melody of a new song which he couldn’t get out of his head. That song was Gloomy Sunday.

A week later in the same city, a young female shop assistant was found hanging from a rope in her flat. Police who investigated the suicide found a copy of the sheet-music to Gloomy Sunday in the dead girl’s bedroom.

Two days after that tragedy, a young secretary in New York gassed herself, and in a suicide note she requested Gloomy Sunday to be played at her funeral. Weeks later, another New Yorker, aged 82, jumped to his death from the window of his seventh-story apartment after playing the ‘deadly’ song on his piano. Around the same time, a teenager in Rome who had heard the unlucky tune jumped off a bridge to his death.

The newspapers of the world were quick to report other deaths associated with Seress’ song. One newspaper covered the case of a woman in North London who had been playing a 78 recording of Gloomy Sunday at full volume, infuriating and frightening her neighbors, who had read of the fatalities supposedly caused by the tune. The stylus finally became trapped in a groove, and the same piece of the song played over and over. The neighbors hammered on the woman’s door but there was no answer, so they forced the door open – only to find the woman dead in her chair from an overdose of barbiturates. As the months went by, a steady stream of bizarre and disturbing deaths that were alleged to be connected to Gloomy Sunday persuaded the chiefs at the BBC to ban the seemingly accursed song from the airwaves. Back in France, Rizzo Seress, the man who had composed the controversial song, was also to experience the adverse effects of his creation. He wrote to his ex-fiancée, pleading for a reconciliation. But several days later came the most awful, shocking news. Seress learned from the police that his sweetheart had poisoned herself. And by her side, a copy of the sheet music to Gloomy Sunday was found.

At the end of the 1930s, when the world was plunged into the war against Hitler, Seress’ inauspicious song was quickly forgotten in the global turmoil, but the sheet-music to the dreaded song is still available (on the Net too) to those who are curious to know if the morbid melody can still exert its deadly influence…

[youtube https://www.youtube.com/watch?v=8Kkxbw3s2pM]It starts in 1933 when Hungarian composer Rezso Seress broke up with his girlfriend on a Sunday. In utter despair he pens ‘Gloomy Sunday.’ The first publisher rejects his song as too depressing. The second commits suicide. But the third sees the potential and publishes ‘Gloomy Sunday’ throughout Europe.
People start dying immediately. In Berlin a man shot himself after telling relatives he couldn’t get that damn song out of his head. In Rome, an errand boy heard a beggar humming the tune, got off his bike, gave the beggar all his money and jumped from the nearest bridge. In one year alone in Hungary seventeen suicides were found with notes quoting the ‘Gloomy Sunday’ lyrics.
Of course sceptics dismiss these claims as anecdotal, quoting the rather strange fact that Hungary was so well known for its high suicide rate that seventeen people found dead in one year clutching the lyrics to a song was ‘par for the course.’
In 1936 the song reached New York and was marketed as ‘The Hungarian Suicide Song.’ Within a week a typist had gassed herself, requesting ‘Gloomy Sunday’ be played at her funeral.
As the death toll mounted, a third verse was added to the song. A happy verse that was intended to counter the depressive urges of the first two. A verse that said: wait, it was all a dream, she’s not dead, there’s no reason to commit suicide and, look, the sun’s coming out!
It didn’t work. The power of ‘Gloomy Sunday’ wasn’t confined to the lyrics. It was the dirge-like melody. As the BBC found out when they banned ‘Gloomy Sunday’ but allowed an instrumental version. A recording was made and released on a 78. Which caused panic in North London when a woman kept playing the record over and over. Neighbours banged on her doors, the police were called, the door forced open and … she was found dead inside – of an overdose.
With the BBC, the US and France all banning the song, another attempt to rehabilitate ‘Gloomy Sunday’ came in 1978 when English psychologist, Sir Edmund Hendricks, suggested an alternative third verse. Sir Edmund was a controversial figure in the world of psychology and a strong proponent of stiff upper lips and ‘tough love.’ His third verse went along the lines of: pull yourself together! You think Sunday’s bad wait until Monday and you have to go back to work!
This re-released version sparked the infamous ‘I don’t like Mondays’ California school shootings.
So, urban legend or frightening fact? The jury, what’s left of them after four hung themselves, is still out.
But judge for yourself. Here’s a short sample of the song and here, below, are the English lyrics as translated by Sam Lewis.
Sunday is gloomy, my hours are slumberless Dearest the shadows I live with are numberless Little white flowers will never awaken you Not where the black coach of sorrow has taken you Angels have no thought of ever returning you Would they be angry if I thought of joining you?
Gloomy Sunday
Gloomy is Sunday, with shadows I spend it all My heart and I have decided to end it all Soon there’ll be candles and prayers that are sad I know Let them not weep let them know that I’m glad to go Death is no dream for in death I’m caressing you With the last breath of my soul I’ll be blessing you
Gloomy Sunday
Singers who have recorded this song include Billie Holiday, Ray Charles, Bjork, Sarah McLachlan and Elvis Costello. Some are still alive. Not composer Rezso Seress however. In 1968, you guessed it, he committed suicide. 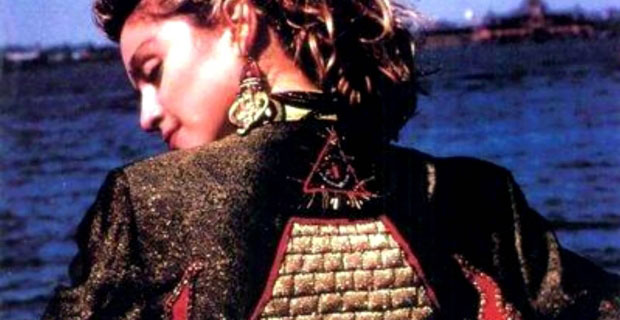 Madonna’s 13th Album / 13 Songs Leaked: “Illuminati is the Truth and the Light”

Madonna released six songs from her new album because they leaked online – something she described in an interview with The Guardian as “a... 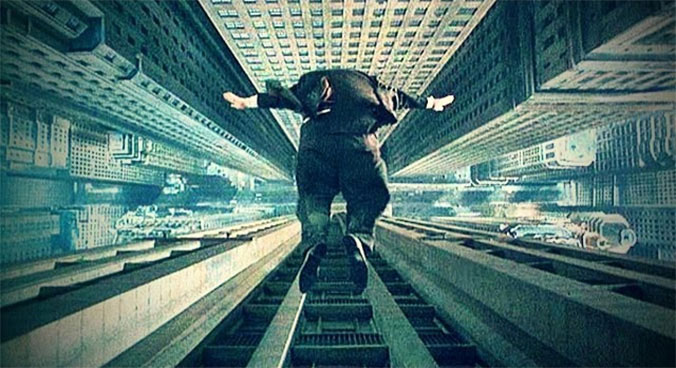 From: zerohedge.com It doesn’t get any more Orwellian than this: Wall Street mega banks crash the U.S. financial system in 2008. Hundreds of thousands... 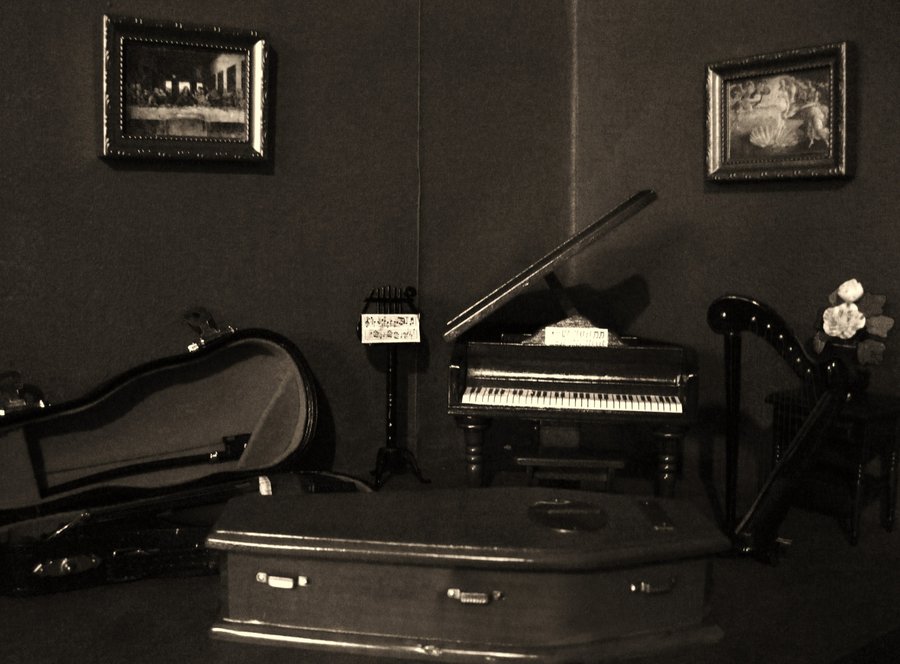 The Mysterious Suicide Song: The Strangest Composition Ever Created

First version of this article was originally published on 26 May, 2012 Music can have different affects on our mood. We all have our... 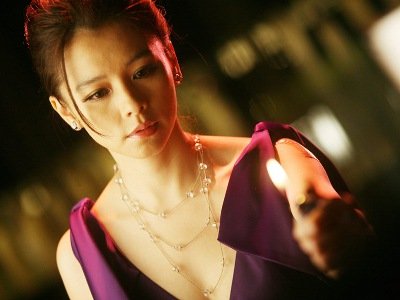 Taiwanese singer-actress Vivian Hsu recently revealed that she had a paranormal encounter while filming a new movie with Simon Yam. According to Jayne Stars... 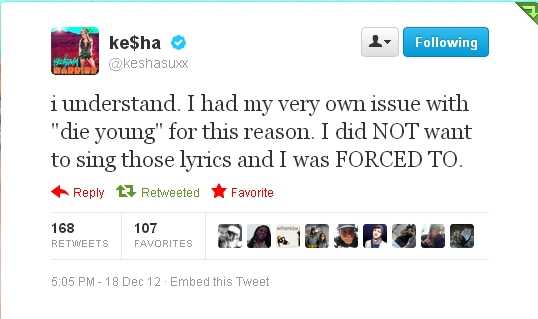 Ke$ha was forced to sing and release “Die Young”?

The singer tweeted “i understand. I had my very own issue with “die young” for this reason. I did NOT want to sing those...