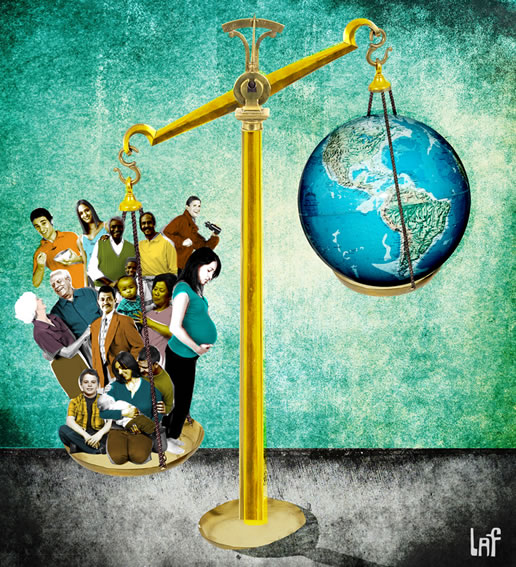 Herman Daly, ecological economist and professor at the School of Public Policy (SPP) of the University of Maryland, has assisted in developing guidelines for defining sustainable development. Daly is a former senior environmental economist for the World Bank. His work as an eco-visionary for economics established the discipline of eco-economies, policies and programs that placed the ideals of eco-fascism and the global acquisition of all biodiversity over the necessities of the world’s population.

Daly has recently warned in a publication that part of the population problem is that populations require resources to sustain a specified metabolic rate which is somehow correlated to environmental depletion and excess of pollution. Because sustaining life is a symbiotic relationship between humanity and the planet, it is humanity that is dependent on the biodiversity of earth.

In this way, Daly asserts that the adage, “more for everyone” has become “the defacto purpose” of consumerism which is the weakening glue that holds society together. Daly offers that a “cure for overpopulation” may be the development of technologies that maintain lower birth rates while controlling the necessities of sustenance for those already born.

As an economist, he views this dilemma as such: “Our economy has a growth-oriented focus on maximizing production flows (birth rates of artifacts) that keeps us in the pre-transition mode, giving rise to growing artifact populations, low product lifetimes, high GDP, and high throughput, with consequent environmental destruction. The transition from a high-maintenance throughput to a low one applies to both human and artifact populations independently. From an environmental perspective, lower throughput is desirable in both cases, at least up to some distant limit.”

Other economists claim that overpopulation is causing poverty in underdeveloped nations. In the Philippines, there is an initiative to control the burgeoning population by forcing family planning onto the citizens. Josefina Natividad, director of the University of the Philippines’ Population Institute (UPPI), explains: “If you increase access to contraceptives for women … you will have births averted.”

The UPPI began with a grant from the globalist think-tank the Ford Foundation in 1964. They influence the Philippine government with research and coercion to push population control agendas with a focus on its impact on local and international communities. The UPPI works with UN-sponsored non-governmental organizations (NGOs) to receive technical assistance in providing reproductive health products.

Back in April, S. Matthew Liao, Anders Sandberg, and Rebecca Roache published a paper that called for human beings to become more energy efficient for the sake of lowering our ecological carbon footprint.

Liao suggests that taking a pill that would cause nausea when a person ate meat would eventually create a lasting aversion to meat-eating. The UN Food and Agricultural Organization (UNFAO) have reported that 18% of the world’s greenhouse gases and CO2 equivalents can be directly contributed to livestock. If we had less animals raised for consumption, we could cull considerable environmental benefits.

Engineering human babies to be smaller is used in pre-implantation genetic diagnosis in fertility clinics today. Embryos are selected for implantation on the basis of certain characteristics. Why not choose to create smaller babies?

To control the world’s human population, many different schemes have been deployed simultaneously in order to cover their intended purpose. When all fronts are joined together in the assault, it is difficult pin-point the origin of the problem.

According to the RAND Corporation, the push for family planning services have had a tremendous effect on the human population globally. It is in a massive decline that will begin to show itself beginning in an estimated 50 years. Based on the agendas of the UN fertility rates worldwide have fallen in underdeveloped nations and these trends are expected to continue.

Because the global Elite claim that global population growth drains our economy and resources, as well as provide a costly burden to the citizens of a nation, the women of developing nations must be refocused to believe that family planning programs and contraception will improve their lives.

Liao, like Daly, believes that parents could use genetic engineering or hormone therapy to birth smaller babies that would be less resource-intensive throughout their lifetime. Larger people consume more food and energy over their life. Smaller people consume less. Liao states that larger people use more fuel per mile in their cars, need more clothing to cover them, wear out their shoes, carpets and furniture faster because of their weight. Liao suggests that the average US citizen’s height should be reduced by 15cm. This would reduce the body mass by 21% for men and 25% for women. A massive reduction in height and mass would slow down metabolic rates by 15% – 18%, meaning less energy and nutrient needs.

The Bill and Melinda Gates Foundation have in their arsenal Depo-Preovera; an implantable fertility control provided from Shanghai Dahua Pharmaceuticals, and donations from Merck to further their advancement of the UN’s Millenium Development Goals which states that there be a 75% reduction in births under the guise of maintaining maternal mortality.

By 2020, Melinda Gates hopes to extend the use of forced sterilization through manipulation of foreign governments to further the scheme of preventing 80 million of “unwanted pregnancies” in places like Africa, India and Southeast Asia. Gates believes she can prevent 40% of people who would otherwise have been born, thereby justifying family planning as a scheme to make women healthier who have “families are more successful and their communities are more prosperous.”

Population stabilization, the true meaning behind family planning is evident in the World Bank and UN Population Fund’s push against sovereign nations to reduce their populations by rule of the “global consensus” which dictates human rights policy by deeming some fit to live and others not.

Based on the Rockefeller Commission report, population stabilization is an endeavor worth pursuing, although its success would take decades because of the high incidents of reproduction by marriage. However, with the destruction of the family, this problem could be solved. Furthermore, the stabilization of the global population would reallocate resources to be better spent in terms of quality versus quantity.

Concluding that the best way to achieve population stabilization is to coerce the nation’s citizens that they freely choose abortion and not having a child at all as part of an acceptable societal norm. By way of implementation of social barrier and cultural pressures, the average citizen would rather go with the flow and chose not to procreate for the sake of being part of the herd.

Simultaneously, by reforming the acceptable amount of children born into a married household, the impact of population growth would seem to be natural. And trends would take care of social conformity. Those who had more children would be shunned.

Increasing access to abortion clinics with the inception and popularity of Planned Parenthood would give unacceptable pregnancies a viable solution. This would distract and control another Baby Boom from occurring. Using images on television, film and print media control the ideals of the modern family to fit the model of a population stabilized by no longer being plagued with “run-a-way” births; but focusing on the example of small-families as the best way to go.