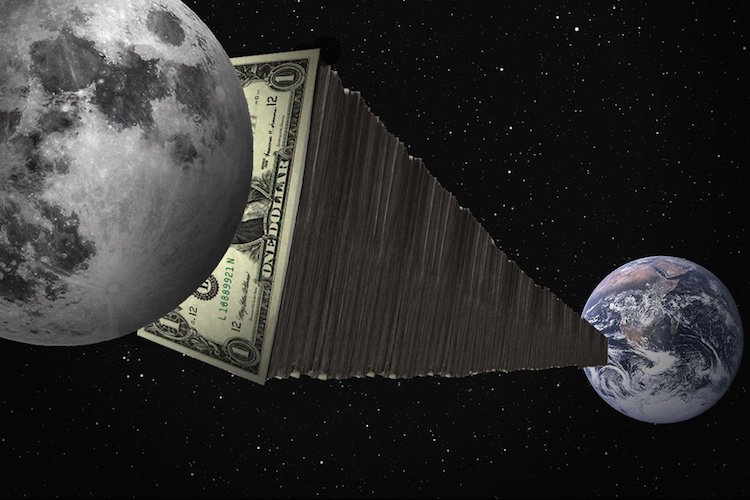 If you’ve ever wondered why the world seems hopelessly fraught with endless conflict, ruled corrupt states, and bent on developing a never-ending supply of advanced weaponry, you’d need to understand the nature of our debt based economy.

The IMF has just reported that total global debt is now at a staggering $164 trillion, which amounts to 225% of total global GDP. Every person on this planet could turn over everything they produce for the next two plus years and we’d still be in debt.

The number is now so astronomically high that its impossible to pay off, and so there really is no point to even trying. In fact, government’s are not at all concerned with paying off the debt because they know the number has lost it’s meaning in the face of such cartoonish proportions.

Even Alan Greenspan, former chairman of the Federal Reserve knows this, essentially admitting that the economy is structured in such a way that the only way to survive is to keep adding debt.

“The United States can pay any debt it has because we can always print money to do that. So there is zero probability of default.” ~Alan Greenspan

But who do we owe, and who’s doing all the borrowing?

In an article on this by Bloomberg, Andrew Mayeda lays the blame for such high numbers on an increase in private sector debt along with the fallout of the economic crisis of 2008.

“Surging private-sector debt, particularly in China, is driving the build-up. China has accounted for almost three-quarters of the increase in private debt since the global financial crisis, according to the fund.

The IMF figures lay bare the scale of the debt hangover from which the world is still recovering a decade after the financial crisis pushed the global banking system to the brink and tipped the world economy into recession. Governments increased spending to boost growth, while central banks resorted to unconventional methods to ease financing conditions, such as buying bonds.” [Source]

What is not said here is the how the debt bubble actually works.

Currency today is created by private institutions who create as much money as banks and governments desire. This money is created out of thin air, literally by punching a few keys on a computer and sending tiny currents of electricity to a screen which displays whatever number the private corporation wants. It is not backed by anything of value, yet these private institutions charge interest to governments and private sector borrowers.

For every dollar created and loaned, the magical money-lender demands that dollar back plus interest. Since the lender is demanding more than was created, it is mathematically impossible to ever pay off debt, because the interest simply just doesn’t exist.

This system ensures that the human race will always be in debt, and this system is the new slavery, meaning that when we owe money in this fashion we are not free to use the full power of our labor and resources to improve our communities and infrastructure. Instead, lending moves in the direction of the development of instability and weapons of war. Any time the lender wishes to flex its muscle it can create instant economic hardships by calling in this and making it more difficult to borrow money to service the debt.

The modern-day debt system maintains a tragic dramatic tension in the world, and on a planet with such abundant resources, you have to wonder with a global debt number so high, do the people of the planet owe each other, or are we really in debt to some type of off-planet entity?

This is a legitimate question, asked by researcher Catherine Austin Fitts, who wonders that with such astronomical numbers, it is possible that planet earth engaged in some type of trade with extra-terrestrials.

After years of investigative research into the trillions of dollars missing from the U.S. government, former Wall Street banker and former Assistant Secretary of Housing and Federal Housing Commissioner at the United States Department of Housing and Urban Development in the first Bush Administration, Catherine Austin Fitts has come to the conclusion that global debt may very well be owned by off-planet entities who operate planet earth as a real estate investment.

“Is earth an open or closed economy? I went to business school, I worked on Wall Street for eleven years, you know I’ve been involved in the economy my whole life and the whole time I was invited to assume that earth was a closed economy. So, if we issued debt, then other humans owned that debt. If we issued stock, other humans owned that stock. But if you look at all the economic experiences I’ve had over my whole life, in government, businesses, everything else, what I will tell you is, you know, if you ask me to describe the economic model on planet earth, I would say, ‘well planet earth is a real estate investment trust because we’re paying a dividend some place every year, and I don’t know where it’s going. It’s going into that question mark, on the planetary balance sheet.” [Source]

Looking at global debt as a transaction between the planet and some other ET force makes a good bit of sense, as it definitely does not make sense for the human race to enslave itself to itself with such an insane system.

This article (Global Debt is Now an Insane $164 Trillion, but Who Exactly Do We Owe?) was originally created and published by Waking Times and is published here under a Creative Commons license with attribution to Isaac Davis and WakingTimes.com. It may be re-posted freely with proper attribution, author bio, and this copyright statement.

In this article:featured, Global Debt